Two cases of Paget’s disease of scrotum in biological brothers 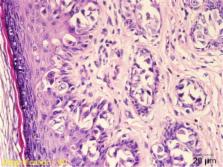 This article reports two cases of scrotum Paget’s disease in two biological brothers who were admitted and treated in our hospital in 2013. They are very rare cases. The present article discusses the potential management of Paget’s disease and the importance of long-term follow-up.

Paget's disease of the vulva: Diagnosis and follow-up key to management; a retrospective study of 50 cases from Queensland.

Menna Jones,  Alex Crandon,  Karen Sanday (2011)
To review the clinical features, diagnosis, management, and outcomes for the 50 cases of Paget's disease (PD) of the vulva referred to Queensland Centre for Gynaecological Cancer between 1986 and 2009. Vulvar PD cases from QCGC were reviewed and analyzed using the computer software Statistical Package for the Social Sciences (SPSS) 11.0. Paget's disease (PD) of the vulva is uncommon. Of the 50 patients, 2 have died of their PD, 1 patient that had coexisting PD died of squamous cell vulva cancer, and 11 died of unrelated causes. The mean age at diagnosis was 67.6 years (range, 31 to 91). All cases were Caucasian. Time from onset of symptoms to diagnosis averaged 21 months. Not until a biopsy was performed was the diagnosis made. The most common presenting complaint was pruritis (27 cases, 54%). There was no identifiable "favored" site on the vulva for PD. Positive groin lymph nodes were found in 4 of the 10 cases who underwent node biopsy. Two who had poorly differentiated carcinoma in the nodes and PD died of disease within a year of diagnosis, one is alive three years later. The fourth case had coincidental PD and vulvar squamous cell carcinoma with squamous carcinoma groin nodes. Initial treatment was surgical. The prognosis for primary extra-mammary PD of the vulva confined to the epidermis (IEP) is excellent. Early diagnosis and long term follow-up are the keys to successful management. The status of disease at the margins of surgical specimens does not reliably equate to patient long term outcomes. Copyright © 2011 Elsevier Inc. All rights reserved.

Extramammary Paget's disease of the penis and scrotum: excision, reconstruction and evaluation of occult malignancy.

Extramammary Paget's disease of scrotum--report of 25 cases and literature review.

Ning Zhang,  Kan Gong,  Xiaodong Zhang … (2016)
We evaluate the clinical manifestations, management, and prognostic characteristics of scrotal extramammary Paget's disease (EMPD). The study comprised 25 patients with scrotal EMPD at our institute from January 1982 to February 2005, with all available clinical and pathological data reviewed. Of these 25 patients, 1 received radiotherapy and 24 received local wide excisions. In 24 operated patients, 7 had local recurrence and/or metastasis of groin lymph node. Five of the 7 with recurrence had a positive surgical margin postoperatively and they received a second local extensive excision. One of the 7 with recurrence and metastasis of the groin lymph node had a second local extensive excision with groin lymphadenectomy, and the last one who only had metastasis of the groin lymph node had a groin lymphadenectomy. Four of 13 patients with dermal invasion by Paget's cell had metastasis. None of the other 12 patients without dermal invasion had metastasis. However, there was no statistical metastasis rate difference (P = 0.096) between the patients with dermal invasion by Paget's cell and without. There was no statistical difference (P = 0.947) in mean delay time from onset of symptoms to diagnosis between the 2 groups either. The follow-up duration varies from 17 to 243 months (mean 119 + 86.2 months). One patient with stage D died of EMPD of the scrotum. We found that EMPD of the scrotum is usually a slow progressive disease, mainly seen in elderly patients, and has a good prognosis when there is noninvasive disease. The primary treatment for EMPD of the scrotum is wide surgical excision. The key to decreasing tumor recurrence, however, is a precise, preoperative histological examination to define the range of the lesion. Copyright 2010 Elsevier Inc. All rights reserved.