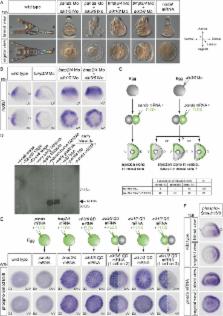 Specification of the dorsal-ventral axis in the highly regulative sea urchin embryo critically relies on the zygotic expression of nodal, but whether maternal factors provide the initial spatial cue to orient this axis is not known. Although redox gradients have been proposed to entrain the dorsal-ventral axis by acting upstream of nodal, manipulating the activity of redox gradients only has modest consequences, suggesting that other factors are responsible for orienting nodal expression and defining the dorsal-ventral axis. Here we uncover the function of Panda, a maternally provided transforming growth factor beta (TGF-β) ligand that requires the activin receptor-like kinases (Alk) Alk3/6 and Alk1/2 receptors to break the radial symmetry of the embryo and orient the dorsal-ventral axis by restricting nodal expression. We found that the double inhibition of the bone morphogenetic protein (BMP) type I receptors Alk3/6 and Alk1/2 causes a phenotype dramatically more severe than the BMP2/4 loss-of-function phenotype, leading to extreme ventralization of the embryo through massive ectopic expression of nodal, suggesting that an unidentified signal acting through BMP type I receptors cooperates with BMP2/4 to restrict nodal expression. We identified this ligand as the product of maternal Panda mRNA. Double inactivation of panda and bmp2/4 led to extreme ventralization, mimicking the phenotype caused by inactivation of the two BMP receptors. Inhibition of maternal panda mRNA translation disrupted the early spatial restriction of nodal, leading to persistent massive ectopic expression of nodal on the dorsal side despite the presence of Lefty. Phylogenetic analysis indicates that Panda is not a prototypical BMP ligand but a member of a subfamily of TGF-β distantly related to Inhibins, Lefty, and TGF-β that includes Maverick from Drosophila and GDF15 from vertebrates. Indeed, overexpression of Panda does not appear to directly or strongly activate phosphoSmad1/5/8 signaling, suggesting that although this TGF-β may require Alk1/2 and/or Alk3/6 to antagonize nodal expression, it may do so by sequestering a factor essential for Nodal signaling, by activating a non-Smad pathway downstream of the type I receptors, or by activating extremely low levels of pSmad1/5/8. We provide evidence that, although panda mRNA is broadly distributed in the early embryo, local expression of panda mRNA efficiently orients the dorsal-ventral axis and that Panda activity is required locally in the early embryo to specify this axis. Taken together, these findings demonstrate that maternal panda mRNA is both necessary and sufficient to orient the dorsal-ventral axis. These results therefore provide evidence that in the highly regulative sea urchin embryo, the activity of spatially restricted maternal factors regulates patterning along the dorsal-ventral axis.

Panda, a member of the TGF-beta family of signaling molecules, is encoded by maternal mRNA and helps to break radial symmetry and orient the dorsal-ventral axis of the developing sea urchin embryo.

A key event during development of bilaterians is specification of the anterior-posterior and dorsal-ventral axes of the embryo. In some species, such as the fly Drosophila, this process relies on the activity of maternal determinants localized into the egg during oogenesis. However, in other animals, such as mammals or echinoderms, which are renowned for the developmental plasticity of their embryos, there is presently no evidence for maternal determinants controlling axis formation, and how these embryonic axes emerge from radially symmetrical embryos remains unknown. In the sea urchin embryo, specification of the dorsal-ventral axis critically relies on the localized expression of the TGF-β ligand Nodal in the presumptive ventral territory, but what controls the spatially restricted expression of nodal is not known. We discovered that in the sea urchin embryo, the initial restriction of nodal expression is directed by another TGF-β ligand that is expressed maternally, which we named Panda. Panda is both necessary for the early spatial restriction of nodal and sufficient to orient the dorsal-ventral axis when misexpressed locally. Altogether, our findings suggest that Panda may act as a maternal signal that defines the orientation of the dorsal-ventral axis. Thus, an antagonism between Nodal and maternal Panda signaling drives dorsal-ventral axis formation in the sea urchin embryo.

J. Hill,  Bernhard Schmierer (2007)
Ligands of the transforming growth factor-beta (TGFbeta) superfamily of growth factors initiate signal transduction through a bewildering complexity of ligand-receptor interactions. Signalling then converges to nuclear accumulation of transcriptionally active SMAD complexes and gives rise to a plethora of specific functional responses in both embryos and adult organisms. Current research is focused on the mechanisms that regulate SMAD activity to evoke cell-type-specific and context-dependent transcriptional programmes. An equally important challenge is understanding the functional role of signal strength and duration. How are these quantitative aspects of the extracellular signal regulated? How are they then sensed and interpreted, and how do they affect responses?

GDF-15 is an inhibitor of leukocyte integrin activation required for survival after myocardial infarction in mice.

Alexander Zarbock,  Tibor Kempf,  Matteo Bolomini-Vittori … (2011)
Inflammatory cell recruitment after myocardial infarction needs to be tightly controlled to permit infarct healing while avoiding fatal complications such as cardiac rupture. Growth differentiation factor-15 (GDF-15), a transforming growth factor-β (TGF-β)-related cytokine, is induced in the infarcted heart of mice and humans. We show that coronary artery ligation in Gdf15-deficient mice led to enhanced recruitment of polymorphonuclear leukocytes (PMNs) into the infarcted myocardium and an increased incidence of cardiac rupture. Conversely, infusion of recombinant GDF-15 repressed PMN recruitment after myocardial infarction. In vitro, GDF-15 inhibited PMN adhesion, arrest under flow and transendothelial migration. Mechanistically, GDF-15 counteracted chemokine-triggered conformational activation and clustering of β(2) integrins on PMNs by activating the small GTPase Cdc42 and inhibiting activation of the small GTPase Rap1. Intravital microscopy in vivo in Gdf15-deficient mice showed that Gdf-15 is required to prevent excessive chemokine-activated leukocyte arrest on the endothelium. Genetic ablation of β(2) integrins in myeloid cells rescued the mortality of Gdf15-deficient mice after myocardial infarction. To our knowledge, GDF-15 is the first cytokine identified as an inhibitor of PMN recruitment by direct interference with chemokine signaling and integrin activation. Loss of this anti-inflammatory mechanism leads to fatal cardiac rupture after myocardial infarction.

Data Availability All sequence files are available from the Genebank database. The accession numbers of panda and alk1/2 mRNA are KF498642 and KF498643. The sequence alignment file can be found within the Supporting Information files.
Data availability:
ScienceOpen disciplines: Life sciences