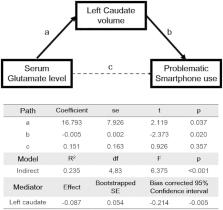 Problematic smartphone use (PSU) is growing rapidly among teens. It has similar presentations as other behavioral addictions in terms of excessive use, impulse control problems, and negative consequences. However, the underlying neurobiological mechanisms remain undiscovered. We hypothesized that structural changes in the striatum might serve as an important link between alteration in glutamate signaling and development of PSU.

Among 88 participants, twenty (F:M, 12:8; age 16.2 ± 1.1) reported high scores in the smartphone addiction proneness scale (SAPS) with a cut-off score of 42; the other 68 (F:M, 19:49; age 15.3 ± 1.7) comprised the control group. Sociodemographic data and depression, anxiety, and impulsivity traits were measured. Striatal volumes (caudate, putamen, and nucleus accumbens) were estimated from T1 imaging data. Serum glutamate levels were estimated from peripheral blood samples. Group comparisons of each data were performed after controlling for age and gender. Mediation analyses were conducted to test the indirect effects of glutamate level alteration on PSU through striatal volumetric alteration.

This study suggests that altered glutamatergic neurotransmission may be associated with PSU among teens, possibly through reduced left caudate volume. Current findings might support neural mechanisms of smartphone addiction.

Anders Dale, Bruce Fischl, Martin I. Sereno (1999)
Several properties of the cerebral cortex, including its columnar and laminar organization, as well as the topographic organization of cortical areas, can only be properly understood in the context of the intrinsic two-dimensional structure of the cortical surface. In order to study such cortical properties in humans, it is necessary to obtain an accurate and explicit representation of the cortical surface in individual subjects. Here we describe a set of automated procedures for obtaining accurate reconstructions of the cortical surface, which have been applied to data from more than 100 subjects, requiring little or no manual intervention. Automated routines for unfolding and flattening the cortical surface are described in a companion paper. These procedures allow for the routine use of cortical surface-based analysis and visualization methods in functional brain imaging. Copyright 1999 Academic Press.

JOAN KAUFMAN, BORIS BIRMAHER, DAVID BRENT … (1997)
To describe the psychometric properties of the Schedule for Affective Disorders and Schizophrenia for School-Age Children-Present and Lifetime version (K-SADS-PL) interview, which surveys additional disorders not assessed in prior K-SADS, contains improved probes and anchor points, includes diagnosis-specific impairment ratings, generates DSM-III-R and DSM-IV diagnoses, and divides symptoms surveyed into a screening interview and five diagnostic supplements. Subjects were 55 psychiatric outpatients and 11 normal controls (aged 7 through 17 years). Both parents and children were used as informants. Concurrent validity of the screen criteria and the K-SADS-PL diagnoses was assessed against standard self-report scales. Interrater (n = 15) and test-retest (n = 20) reliability data were also collected (mean retest interval: 18 days; range: 2 to 36 days). Rating scale data support the concurrent validity of screens and K-SADS-PL diagnoses. Interrater agreement in scoring screens and diagnoses was high (range: 93% to 100%). Test-retest reliability kappa coefficients were in the excellent range for present and/or lifetime diagnoses of major depression, any bipolar, generalized anxiety, conduct, and oppositional defiant disorder (.77 to 1.00) and in the good range for present diagnoses of posttraumatic stress disorder and attention-deficit hyperactivity disorder (.63 to .67). Results suggest the K-SADS-PL generates reliable and valid child psychiatric diagnoses.

Measuring the thickness of the human cerebral cortex from magnetic resonance images.

B Fischl, A M Dale (2000)
Accurate and automated methods for measuring the thickness of human cerebral cortex could provide powerful tools for diagnosing and studying a variety of neurodegenerative and psychiatric disorders. Manual methods for estimating cortical thickness from neuroimaging data are labor intensive, requiring several days of effort by a trained anatomist. Furthermore, the highly folded nature of the cortex is problematic for manual techniques, frequently resulting in measurement errors in regions in which the cortical surface is not perpendicular to any of the cardinal axes. As a consequence, it has been impractical to obtain accurate thickness estimates for the entire cortex in individual subjects, or group statistics for patient or control populations. Here, we present an automated method for accurately measuring the thickness of the cerebral cortex across the entire brain and for generating cross-subject statistics in a coordinate system based on cortical anatomy. The intersubject standard deviation of the thickness measures is shown to be less than 0.5 mm, implying the ability to detect focal atrophy in small populations or even individual subjects. The reliability and accuracy of this new method are assessed by within-subject test-retest studies, as well as by comparison of cross-subject regional thickness measures with published values.