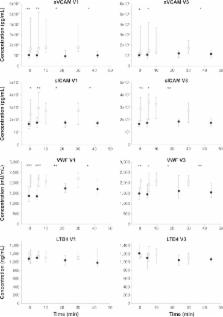 There is an ongoing demand for easily accessible biomarkers related to pathophysiological processes in chronic obstructive pulmonary disease (COPD). Short-term intense exercise is known to increase the peripheral blood levels of cytokines. Therefore, we tested the potential and the repeatability of an exercise challenge to amplify seven serum biomarkers (interleukin 6 [IL6], C-reactive protein [CRP], myeloperoxidase [MPO], leukotriene B4, soluble intercellular adhesion molecule 1, soluble vascular cell adhesion molecule 1, and von Willebrand factor [VWF]) in smokers with and without COPD. Twenty-three smokers with moderate COPD (GOLD 2) and 23 sex- and age-matched healthy smokers underwent up to 30-minute submaximal, constant-load exercise (75% of maximum work load) on two occasions separated by 4 weeks (second challenge n=19/20). Serum samples were obtained before, 5 minutes after the start, at the end of exercise (maximum 30 minutes or until exhaustion), and after additional 20 minutes of rest. The median (interquartile range) exercise time until exhaustion in the two challenges was 10.0 (4.0) minutes and 10.0 (8.0) minutes in smokers with COPD and 22.0 (16.0) minutes and 26.5 (14.5) minutes in healthy smokers. The exercise challenge significantly increased the serum concentrations of IL6 and VWF, but decreased the concentrations of MPO. Healthy smokers showed a significantly greater increase (at the end of exercise compared to before exercise) in IL6 ( P=0.01) and a larger decline ( P=0.03) in MPO. The overall profile of the serum markers during the exercise challenge was shown to be repeatable in the second challenge. In summary, intense load exercise is capable of changing the concentration of inflammatory and endothelial function markers. Especially, the decline in the level of MPO, a marker closely related to cardiovascular risk, appears to be of clinical interest, as the exercise-induced decline might be related to the beneficial effects of physical activity in general.

Association between chronic obstructive pulmonary disease and systemic inflammation: a systematic review and a meta-analysis.

S. F. Paul Man,  Don Sin,  A Senthilselvan … (2004)
Individuals with chronic obstructive pulmonary disease (COPD) are at increased risk of cardiovascular diseases, osteoporosis, and muscle wasting. Systemic inflammation may be involved in the pathogenesis of these disorders. A study was undertaken to determine whether systemic inflammation is present in stable COPD. A systematic review was conducted of studies which reported on the relationship between COPD, forced expiratory volume in 1 second (FEV(1)) or forced vital capacity (FVC), and levels of various systemic inflammatory markers: C-reactive protein (CRP), fibrinogen, leucocytes, tumour necrosis factor-alpha (TNF-alpha), and interleukins 6 and 8. Where possible the results were pooled together to produce a summary estimate using a random or fixed effects model. Fourteen original studies were identified. Overall, the standardised mean difference in the CRP level between COPD and control subjects was 0.53 units (95% confidence interval (CI) 0.34 to 0.72). The standardised mean difference in the fibrinogen level was 0.47 units (95% CI 0.29 to 0.65). Circulating leucocytes were also higher in COPD than in control subjects (standardised mean difference 0.44 units (95% CI 0.20 to 0.67)), as were serum TNF-alpha levels (standardised mean difference 0.59 units (95% CI 0.29 to 0.89)). Reduced lung function is associated with increased levels of systemic inflammatory markers which may have important pathophysiological and therapeutic implications for subjects with stable COPD.

Mark A. Febbraio,  Bente Pedersen (2002)
It has recently been demonstrated that the marked increase in the systemic concentration of cytokine interleukin-6 (IL-6) seen with exercise originates from the contracting limb and that skeletal muscle cells per se are the likely source of the production. This review summarizes the possible mechanisms for activation and biological consequences of muscle-derived IL-6. It appears that intramuscular IL-6 is stimulated by complex signaling cascades initiated by both calcium (Ca2+) -dependent and -independent stimuli. It also seems likely that skeletal muscle produces IL-6 to aid in maintaining metabolic homeostasis during periods of altered metabolic demand such as muscular exercise or insulin stimulation. It may do so via local and/or systemic effects. This review also explores the efficacy that IL-6 may be used as a therapeutic drug in treating metabolic disorders such as obesity, type 2 diabetes, and atherosclerosis.