Genetic characterization of an H5N6 avian influenza virus with multiple origins from a chicken in southern China, October 2019 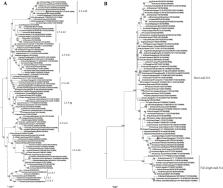 Highly pathogenic avian influenza viruses (HPAIVs) of H5 subtype pose a great threat to the poultry industry and human health. In recent years, H5N6 subtype has rapidly replaced H5N1 as the most predominate HPAIV subtype circulating in domestic poultry in China. In this study, we describe the genetic and phylogenetic characteristics of a prevalent H5N6 strain in Guangdong, China.

Nucleotide sequencing identified a H5N6 subtype HPAIV, designated as A/chicken/Dongguan/1101/2019 (DG/19), with a multibasic cleavage site in the hemagglutinin (HA). Phylogenetic analysis revealed DG/19 was a reassortant of H5N1, H5N2, H5N8, and H6N6 subtypes of avian influenza viruses. A number of mammalian adaptive markers such as D36N in the HA were identified.

Our results showed that HPAIV H5N6 strains still emerge in well-managed groups of chicken farms. Considering the increasing prevalence of H5N6 HPAIV, and the fact that H5N6 HPAIVs are well adapted to migratory birds, an enhanced surveillance for the East Asian-Australasian flyway should be undertaken to prevent potential threats to the poultry industry and human health.

Andrew Waterhouse,  Martino Bertoni,  Stefan Bienert … (2018)
Abstract Homology modelling has matured into an important technique in structural biology, significantly contributing to narrowing the gap between known protein sequences and experimentally determined structures. Fully automated workflows and servers simplify and streamline the homology modelling process, also allowing users without a specific computational expertise to generate reliable protein models and have easy access to modelling results, their visualization and interpretation. Here, we present an update to the SWISS-MODEL server, which pioneered the field of automated modelling 25 years ago and been continuously further developed. Recently, its functionality has been extended to the modelling of homo- and heteromeric complexes. Starting from the amino acid sequences of the interacting proteins, both the stoichiometry and the overall structure of the complex are inferred by homology modelling. Other major improvements include the implementation of a new modelling engine, ProMod3 and the introduction a new local model quality estimation method, QMEANDisCo. SWISS-MODEL is freely available at https://swissmodel.expasy.org.

Guus F. Rimmelzwaan,  Anders Wallensten,  Ron Fouchier … (2005)
In wild aquatic birds and poultry around the world, influenza A viruses carrying 15 antigenic subtypes of hemagglutinin (HA) and 9 antigenic subtypes of neuraminidase (NA) have been described. Here we describe a previously unidentified antigenic subtype of HA (H16), detected in viruses circulating in black-headed gulls in Sweden. In agreement with established criteria for the definition of antigenic subtypes, hemagglutination inhibition assays and immunodiffusion assays failed to detect specific reactivity between H16 and the previously described subtypes H1 to H15. Genetically, H16 HA was found to be distantly related to H13 HA, a subtype also detected exclusively in shorebirds, and the amino acid composition of the putative receptor-binding site of H13 and H16 HAs was found to be distinct from that in HA subtypes circulating in ducks and geese. The H16 viruses contained NA genes that were similar to those of other Eurasian shorebirds but genetically distinct from N3 genes detected in other birds and geographical locations. The European gull viruses were further distinguishable from other influenza A viruses based on their PB2, NP, and NS genes. Gaining information on the full spectrum of avian influenza A viruses and creating reagents for their detection and identification will remain an important task for influenza surveillance, outbreak control, and animal and public health. We propose that sequence analyses of HA and NA genes of influenza A viruses be used for the rapid identification of existing and novel HA and NA subtypes.

Kitman Dyrting,  Chase Ellis,  Ken F. Shortridge … (2002)
Although A/Hong Kong/156/97 (H5N1/97)-like viruses associated with the "bird flu" incident in Hong Kong SAR have not been detected since the slaughter of poultry in 1997, its putative precursors continue to persist in the region. One of these, Goose/Guangdong/1/96 (H5N1 Gs/Gd)-like viruses, reassorted with other avian viruses to generate multiple genotypes of H5N1 viruses that crossed to chickens and other terrestrial poultry from its reservoir in geese. Whereas none of these recent reassortants had acquired the gene constellation of H5N1/97, these events provide insight into how such a virus may have been generated. The recent H5N1 reassortants readily infect and kill chicken and quail after experimental infection, and some were associated with significant mortality of chickens within the poultry retail markets in Hong Kong. Some genotypes are lethal for mice after intra-nasal inoculation and spread to the brain. On this occasion, the early detection of H5N1 viruses in the retail, live poultry markets led to preemptive intervention before the occurrence of human disease, but these newly emerging, highly pathogenic H5N1 viruses provide cause for pandemic concern.