A new species and a new record of the Southeast Asian millipede genus Antheromorpha Jeekel, 1968 (Polydesmida, Paradoxosomatidae) from Vietnam 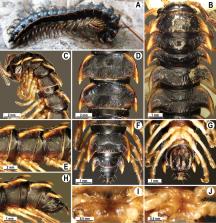 Antheromorpha nguyeni sp. n. is described and illustrated from Kon Ka Kinh National Park, southern Vietnam. The new species is distinguished by a peculiar colour pattern showing a uniformly black-brown body contrasting with yellow-brown paraterga and epiproct, as well as in the pointed gonopodal process being unusually short, only approximately half as long as the solenophore. In addition, an identification key to all 13 presently known species, all mapped, is given. A new record of A. festiva is provided from southern Vietnam.

Revision of the Southeast Asian millipede genus Orthomorpha Bollman, 1893, with the proposal of a new genus (Diplopoda, Polydesmida, Paradoxosomatidae)