A prospective view of animal and human Fasciolosis 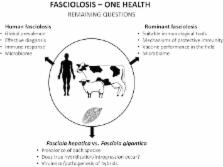 Fasciolosis, a food‐borne trematodiasis, results following infection with the parasites, Fasciola hepatica and Fasciola gigantica. These trematodes greatly affect the global agricultural community, infecting millions of ruminants worldwide and causing annual economic losses in excess of US $3 billion. Fasciolosis, an important zoonosis, is classified by WHO as a neglected tropical disease with an estimated 17 million people infected and a further 180 million people at risk of infection. The significant impact on agriculture and human health together with the increasing demand for animal‐derived food products to support global population growth demonstrate that fasciolosis is a major One Health problem. This review details the problematic issues surrounding fasciolosis control, including drug resistance, lack of diagnosis and the threat that hybridization of the Fasciola species poses to future animal and human health. We discuss how these parasites may mediate their long‐term survival through regulation and modulation of the host immune system, by altering the host immune homeostasis and/or by influencing the intestinal microbiome particularly in respect to concurrent infections with other pathogens. Large genome, transcriptome and proteomic data sets are now available to support an integrated One Health approach to develop novel diagnostic and control strategies for both animal and human disease.

Role of the commensal microbiota in normal and pathogenic host immune responses.

Dan R. Littman,  Eric G. Pamer (2011)
The commensal microbiota that inhabit different parts of the gastrointestinal (GI) tract have been shaped by coevolution with the host species. The symbiotic relationship of the hundreds of microbial species with the host requires a tuned response that prevents host damage, e.g., inflammation, while tolerating the presence of the potentially beneficial microbes. Recent studies have begun to shed light on immunological processes that participate in maintenance of homeostasis with the microbiota and on how disturbance of host immunity or the microbial ecosystem can result in disease-provoking dysbiosis. Our growing appreciation of this delicate host-microbe relationship promises to influence our understanding of inflammatory diseases and infection by microbial pathogens and to provide new therapeutic opportunities. Copyright © 2011 Elsevier Inc. All rights reserved.