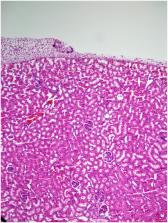 Long-term ketamine use is known to create an interstitial cystitis-like problem in the bladder. It is known that long-term intermittent ketamine is applied to the children receiving radiotherapy for sedation. This study was planned to investigate whether this effect seen in the bladder causes similar changes in the kidneys, testicles, epididymis and ductus deferens.

A total of 12 male Wistar Albino rats for 3 weeks were used in the study. Rats were divided equally into 2 groups as, ketamine and saline. 50 mg/kg ketamine was administered intraperitoneally during 21 days to ketamine (K) groups. 1mL/kg saline was administered intraperitoneally during 21 days to saline (S) groups. At the end of 21 days kidney and testicular tissues were taken for biochemical and histopathological evaluations.

We think that the results we have achieved in this study will provide guidance on ketamine, which is repeated in daily anesthesia applications, especially in radiation oncology. But these findings should be supported by clinical and experimental studies that will be conducted in a more detailed and broad series.

Ketamine anesthesia during the first week of life can cause long-lasting cognitive deficits in rhesus monkeys.

M.G. Paule,  M. Li,  R.R. Allen … (2011)
Previously our laboratory has shown that ketamine exposure (24h of clinically relevant anesthesia) causes significant increases in neuronal cell death in perinatal rhesus monkeys. Sensitivity to this ketamine-induced neurotoxicity was observed on gestational days 120-123 (in utero exposure via maternal anesthesia) and on postnatal days (PNDs) 5-6, but not on PNDs 35-37. In the present study, six monkeys were exposed on PND 5 or 6 to intravenous ketamine anesthesia to maintain a light surgical plane for 24h and six control animals were unexposed. At 7 months of age all animals were weaned and began training to perform a series of cognitive function tasks as part of the National Center for Toxicological Research (NCTR) Operant Test Battery (OTB). The OTB tasks used here included those for assessing aspects of learning, motivation, color discrimination, and short-term memory. Subjects responded for banana-flavored food pellets by pressing response levers and press-plates during daily (M-F) test sessions (50 min) and were assigned training scores based upon their individual performance. As reported earlier (Paule et al., 2009) beginning around 10 months of age, control animals significantly outperformed (had higher training scores than) ketamine-exposed animals for approximately the next 10 months. For animals now over 3 and one-half years of age, the cognitive impairments continue to manifest in the ketamine-exposed group as poorer performance in the OTB learning and color and position discrimination tasks, as deficits in accuracy of task performance, but also in response speed. There are also apparent differences in the motivation of these animals which may be impacting OTB performance. These observations demonstrate that a single 24-h episode of ketamine anesthesia, occurring during a sensitive period of brain development, results in very long-lasting deficits in brain function in primates and provide proof-of-concept that general anesthesia during critical periods of brain development can result in subsequent functional deficits. Supported by NICHD, CDER/FDA and NCTR/FDA. Published by Elsevier Inc.

Charlotte Hotchkiss,  Andrew Scallet,  Joseph Hanig … (2007)
Ketamine is widely used as a pediatric anesthetic. Studies in developing rodents have indicated that ketamine-induced anesthesia results in brain cell death. Additional studies are needed to determine if ketamine anesthesia results in brain cell death in the nonhuman primate and if so, to begin to define the stage of development and the duration of ketamine anesthesia necessary to produce brain cell death. Rhesus monkeys (N = 3 for each treatment and control group) at three stages of development (122 days of gestation and 5 and 35 postnatal days [PNDs]) were administered ketamine intravenously for 24 h to maintain a surgical anesthetic plane, followed by a 6-h withdrawal period. Similar studies were performed in PND 5 animals with 3 h of ketamine anesthesia. Animals were subsequently perfused and brain tissue processed for analyses. Ketamine (24-h infusion) produced a significant increase in the number of caspase 3-, Fluoro-Jade C- and silver stain-positive cells in the cortex of gestational and PND 5 animals but not in PND 35 animals. Electron microscopy indicated typical nuclear condensation and fragmentation in some neuronal cells, and cell body swelling was observed in others indicating that ketamine-induced neuronal cell death is most likely both apoptotic and necrotic in nature. Ketamine increased N-methyl-D-aspartate (NMDA) receptor NR1 subunit messenger RNA in the frontal cortex where enhanced cell death was apparent. Earlier developmental stages (122 days of gestation and 5 PNDs) appear more sensitive to ketamine-induced neuronal cell death than later in development (35 PNDs). However, a shorter duration of ketamine anesthesia (3 h) did not result in neuronal cell death in the 5-day-old monkey.