Evidence That the Transition of HIV-1 Gp41 into a Six-Helix Bundle, Not the Bundle Configuration, Induces Membrane Fusion 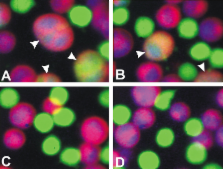 Many viral fusion proteins exhibit a six-helix bundle as a core structure. HIV Env–induced fusion was studied to resolve whether membrane merger was due to the transition into the bundle configuration or occurred after bundle formation. Suboptimal temperature was used to arrest fusion at an intermediate stage. When bundle formation was prevented by adding inhibitory peptides at this stage, membranes did not merge upon raising temperature. Inversely, when membrane merger was prevented by incorporating lysophosphatidylcholine (LPC) into cell membranes at the intermediate, the bundle did not form upon optimizing temperature. In the absence of LPC, the six-helix bundle did not form when the temperature of the intermediate was raised for times too short to promote fusion. Kinetic measures showed that after the temperature pulse, cells had not advanced further toward fusion. The latter results indicate that bundle formation is the rate-limiting step between the arrested intermediate and fusion. Electrical measures showed that the HIV Env–induced pore is initially large and grows rapidly. It is proposed that bundle formation and fusion are each contingent on the other and that movement of Env during its transition into the six-helix bundle directly induces the lipid rearrangements of membrane fusion. Because peptide inhibition showed that, at the intermediate stage, the heptad repeats of gp41 have become stably exposed, creation of the intermediate could be of importance in drug and/or vaccine development.

Core structure of gp41 from the HIV envelope glycoprotein.

David Chan, Deborah Fass, James M Berger … (1997)
The envelope glycoprotein of human immunodeficiency virus type 1 (HIV-1) consists of a complex of gp120 and gp41. gp120 determines viral tropism by binding to target-cell receptors, while gp41 mediates fusion between viral and cellular membranes. Previous studies identified an alpha-helical domain within gp41 composed of a trimer of two interacting peptides. The crystal structure of this complex, composed of the peptides N36 and C34, is a six-helical bundle. Three N36 helices form an interior, parallel coiled-coil trimer, while three C34 helices pack in an oblique, antiparallel manner into highly conserved, hydrophobic grooves on the surface of this trimer. This structure shows striking similarity to the low-pH-induced conformation of influenza hemagglutinin and likely represents the core of fusion-active gp41. Avenues for the design/discovery of small-molecule inhibitors of HIV infection are directly suggested by this structure.

E. A. Berger, P Murphy, J Farber (1999)
In addition to CD4, the human immunodeficiency virus (HIV) requires a coreceptor for entry into target cells. The chemokine receptors CXCR4 and CCR5, members of the G protein-coupled receptor superfamily, have been identified as the principal coreceptors for T cell line-tropic and macrophage-tropic HIV-1 isolates, respectively. The updated coreceptor repertoire includes numerous members, mostly chemokine receptors and related orphans. These discoveries provide a new framework for understanding critical features of the basic biology of HIV-1, including the selective tropism of individual viral variants for different CD4+ target cells and the membrane fusion mechanism governing virus entry. The coreceptors also provide molecular perspectives on central puzzles of HIV-1 disease, including the selective transmission of macrophage-tropic variants, the appearance of T cell line-tropic variants in many infected persons during progression to AIDS, and differing susceptibilities of individuals to infection and disease progression. Genetic findings have yielded major insights into the in vivo roles of individual coreceptors and their ligands; of particular importance is the discovery of an inactivating mutation in the CCR5 gene which, in homozygous form, confers strong resistance to HIV-1 infection. Beyond providing new perspectives on fundamental aspects of HIV-1 transmission and pathogenesis, the coreceptors suggest new avenues for developing novel therapeutic and preventative strategies to combat the AIDS epidemic.

Atomic structure of the ectodomain from HIV-1 gp41.

W Weissenhorn, A Dessen, S C Harrison … (1997)
Fusion of viral and cellular membranes by the envelope glycoprotein gp120/gp41 effects entry of HIV-1 into the cell. The precursor, gp160, is cleaved post-translationally into gp120 and gp41 which remain non-covalently associated. Binding to both CD4 and a co-receptor leads to the conformational changes in gp120/gp41 needed for membrane fusion. We used X-ray crystallography to determine the structure of the protease-resistant part of a gp41 ectodomain solubilized with a trimeric GCN4 coiled coil in place of the amino-terminal fusion peptide. The core of the molecule is found to be an extended, triple-stranded alpha-helical coiled coil with the amino terminus at its tip. A carboxy-terminal alpha-helix packs in the reverse direction against the outside of the coiled coil, placing the amino and carboxy termini near each other at one end of the long rod. These features, and the existence of a similar reversal of chain direction in the fusion pH-induced conformation of influenza virus HA2 and in the transmembrane subunit of Moloney murine leukaemia virus (Fig. 1a-d), suggest a common mechanism for initiating fusion.