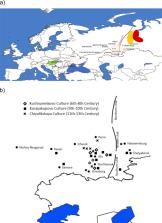 Hungarians who live in Central Europe today are one of the westernmost Uralic speakers. Despite of the proposed Volga-Ural/West Siberian roots of the Hungarian language, the present-day Hungarian gene pool is highly similar to that of the surrounding Indo-European speaking populations. However, a limited portion of specific Y-chromosomal lineages from haplogroup N, sometimes associated with the spread of Uralic languages, link modern Hungarians with populations living close to the Ural Mountain range on the border of Europe and Asia. Here we investigate the paternal genetic connection between these spatially separated populations. We reconstruct the phylogeny of N3a4-Z1936 clade by using 33 high-coverage Y-chromosomal sequences and estimate the coalescent times of its sub-clades. We genotype close to 5000 samples from 46 Eurasian populations to show the presence of N3a4-B539 lineages among Hungarians and in the populations from Ural Mountain region, including Ob-Ugric-speakers from West Siberia who are geographically distant but linguistically closest to Hungarians. This sub-clade splits from its sister-branch N3a4-B535, frequent today among Northeast European Uralic speakers, 4000–5000 ya, which is in the time-frame of the proposed divergence of Ugric languages.

The Sequence Alignment/Map format and SAMtools

Heng Li,  Bob Handsaker,  Alec Wysoker … (2009)
Summary: The Sequence Alignment/Map (SAM) format is a generic alignment format for storing read alignments against reference sequences, supporting short and long reads (up to 128 Mbp) produced by different sequencing platforms. It is flexible in style, compact in size, efficient in random access and is the format in which alignments from the 1000 Genomes Project are released. SAMtools implements various utilities for post-processing alignments in the SAM format, such as indexing, variant caller and alignment viewer, and thus provides universal tools for processing read alignments. Availability: http://samtools.sourceforge.net Contact: rd@sanger.ac.uk

Bayesian Phylogenetics with BEAUti and the BEAST 1.7

Andreas Untergasser,  Ioana Cutcutache,  Triinu Koressaar … (2012)
Polymerase chain reaction (PCR) is a basic molecular biology technique with a multiplicity of uses, including deoxyribonucleic acid cloning and sequencing, functional analysis of genes, diagnosis of diseases, genotyping and discovery of genetic variants. Reliable primer design is crucial for successful PCR, and for over a decade, the open-source Primer3 software has been widely used for primer design, often in high-throughput genomics applications. It has also been incorporated into numerous publicly available software packages and web services. During this period, we have greatly expanded Primer3’s functionality. In this article, we describe Primer3’s current capabilities, emphasizing recent improvements. The most notable enhancements incorporate more accurate thermodynamic models in the primer design process, both to improve melting temperature prediction and to reduce the likelihood that primers will form hairpins or dimers. Additional enhancements include more precise control of primer placement—a change motivated partly by opportunities to use whole-genome sequences to improve primer specificity. We also added features to increase ease of use, including the ability to save and re-use parameter settings and the ability to require that individual primers not be used in more than one primer pair. We have made the core code more modular and provided cleaner programming interfaces to further ease integration with other software. These improvements position Primer3 for continued use with genome-scale data in the decade ahead.