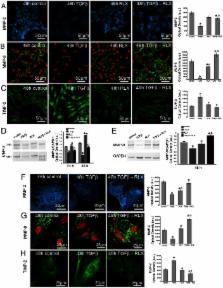 The hormone relaxin (RLX) is produced by the heart and has beneficial actions on the cardiovascular system. We previously demonstrated that RLX stimulates mouse neonatal cardiomyocyte growth, suggesting its involvement in endogenous mechanisms of myocardial histogenesis and regeneration. In the present study, we extended the experimentation by evaluating the effects of RLX on primary cultures of neonatal cardiac stromal cells. RLX inhibited TGF-β1-induced fibroblast-myofibroblast transition, as judged by its ability to down-regulate α-smooth muscle actin and type I collagen expression. We also found that the hormone up-regulated metalloprotease (MMP)-2 and MMP-9 expression and downregulated the tissue inhibitor of metalloproteinases (TIMP)-2 in TGF-β1-stimulated cells. Interestingly, the effects of RLX on cardiac fibroblasts involved the activation of Notch-1 pathway. Indeed, Notch-1 expression was significantly decreased in TGF-β1-stimulatedfibroblasts as compared to the unstimulated controls; this reduction was prevented by the addition of RLX to TGF-β1-stimulated cells. Moreover, pharmacological inhibition of endogenous Notch-1 signaling by N-3,5-difluorophenyl acetyl-L-alanyl-2-phenylglycine-1,1-dimethylethyl ester (DAPT), a γ-secretase specific inhibitor, as well as the silencing of Notch-1 ligand, Jagged-1, potentiated TGF-β1-induced myofibroblast differentiation and abrogated the inhibitory effects of RLX. Interestingly, RLX and Notch-1 exerted their inhibitory effects by interfering with TGF-β1 signaling, since the addition of RLX to TGF-β1-stimulated cells caused a significant decrease in Smad3 phosphorylation, a typical downstream event of TGF-β1 receptor activation, while the treatment with a prevented this effect. These data suggest that Notch signaling can down-regulate TGF-β1/Smad3-induced fibroblast-myofibroblast transition and that RLX could exert its well known anti-fibrotic action through the up-regulation of this pathway. In conclusion, the results of the present study beside supporting the role of RLX in the field of cardiac fibrosis, provide novel experimental evidence on the molecular mechanisms underlying its effects.

Noemi Soto-Nieves,  Erwin P Bottinger,  Jiri Zavadil … (2004)
Epithelial-to-mesenchymal transitions (EMTs) underlie cell plasticity required in embryonic development and frequently observed in advanced carcinogenesis. Transforming growth factor-beta (TGF-beta) induces EMT phenotypes in epithelial cells in vitro and has been associated with EMT in vivo. Here we report that expression of the hairy/enhancer-of-split-related transcriptional repressor Hey1, and the Notch-ligand Jagged1 (Jag1), was induced by TGF-beta at the onset of EMT in epithelial cells from mammary gland, kidney tubules, and epidermis. The HEY1 expression profile was biphasic, consisting of immediate-early Smad3-dependent, Jagged1/Notch-independent activation, followed by delayed, indirect Jagged1/Notch-dependent activation. TGF-beta-induced EMT was blocked by RNA silencing of HEY1 or JAG1, and by chemical inactivation of Notch. The EMT phenotype, biphasic activation of Hey1, and delayed expression of Jag1 were induced by TGF-beta in wild-type, but not in Smad3-deficient, primary mouse kidney tubular epithelial cells. Our findings identify a new mechanism for functional integration of Jagged1/Notch signalling and coordinated activation of the Hey1 transcriptional repressor controlled by TGF-beta/Smad3, and demonstrate functional roles for Smad3, Hey1, and Jagged1/Notch in mediating TGF-beta-induced EMT.

Andries Blokzijl,  Camilla Dahlqvist,  Eva Reissmann … (2003)
The Notch and transforming growth factor-β (TGF-β) signaling pathways play critical roles in the control of cell fate during metazoan development. However, mechanisms of cross-talk and signal integration between the two systems are unknown. Here, we demonstrate a functional synergism between Notch and TGF-β signaling in the regulation of Hes-1, a direct target of the Notch pathway. Activation of TGF-β signaling up-regulated Hes-1 expression in vitro and in vivo. This effect was abrogated in myogenic cells by a dominant-negative form of CSL, an essential DNA-binding component of the Notch pathway. TGF-β regulated transcription from the Hes-1 promoter in a Notch-dependent manner, and the intracellular domain of Notch1 (NICD) cooperated synergistically with Smad3, an intracellular transducer of TGF-β signals, to induce the activation of synthetic promoters containing multimerized CSL- or Smad3-binding sites. NICD and Smad3 were shown to interact directly, both in vitro and in cells, in a ligand-dependent manner, and Smad3 could be recruited to CSL-binding sites on DNA in the presence of CSL and NICD. These findings indicate that Notch and TGF-β signals are integrated by direct protein–protein interactions between the signal-transducing intracellular elements from both pathways.

This work was financially supported by research grants from the University of Florence to C.S., S.Z.O., D.B and L.F. and the Italian Ministry of University and Research-MIUR-PRIN 2008 to S.Z.O. The funders had no role in study design, data collection and analysis, decision to publish, or preparation of the manuscript.