Effect of myostatin deletion on cardiac and microvascular function 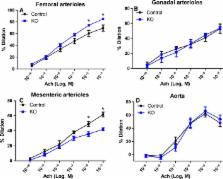 The objective of this study is to test the hypothesis that increased muscle mass has positive effects on cardiovascular function. Specifically, we tested the hypothesis that increases in lean body mass caused by deletion of myostatin improves cardiac performance and vascular function. Echocardiography was used to quantify left ventricular function at baseline and after acute administration of propranolol and isoproterenol to assess β‐adrenergic reactivity. Additionally, resistance vessels in several beds were removed, cannulated, pressurized to 60 mmHg and reactivity to vasoactive stimuli was assessed. Hemodynamics were measured using in vivo radiotelemetry. Myostatin deletion results in increased fractional shortening at baseline. Additionally, arterioles in the coronary and muscular microcirculations are more sensitive to endothelial‐dependent dilation while nonmuscular beds or the aorta were unaffected. β‐adrenergic dilation was increased in both coronary and conduit arteries, suggesting a systemic effect of increased muscle mass on vascular function. Overall hemodynamics and physical characteristics (heart weight and size) remained unchanged. Myostatin deletion mimics in part the effects of exercise on cardiovascular function. It significantly increases lean muscle mass and results in muscle‐specific increases in endothelium‐dependent vasodilation. This suggests that increases in muscle mass may serve as a buffer against pathological states that specifically target cardiac function (heart failure), the β‐adrenergic system (age), and nitric oxide bio‐availability (atherosclerosis). Taken together, pharmacological inhibition of the myostatin pathway could prove an excellent mechanism by which the benefits of exercise can be conferred in patients that are unable to exercise.

Effect of exercise on coronary endothelial function in patients with coronary artery disease.

R Hambrecht,  N Schoene,  G. Schuler … (2000)
Studies of the cardioprotective effects of exercise training in patients with coronary artery disease have yielded contradictory results. Exercise training has been associated with improvement in myocardial perfusion even in patients who have progression of coronary atherosclerosis. We therefore conducted a prospective study of the effect of exercise training on endothelial function in patients with coronary artery disease. We randomly assigned 19 patients with coronary endothelial dysfunction, indicated by abnormal acetylcholine-induced vasoconstriction, to an exercise-training group (10 patients) or a control group (9 patients). To reduce confounding, patients with coronary risk factors that could be influenced by exercise training (such as diabetes, hypertension, hypercholesterolemia, and smoking) were excluded. In an initial study and after four weeks, the changes in vascular diameter in response to the intracoronary infusion of increasing doses of acetylcholine (0.072, 0.72, and 7.2 microg per minute) were assessed. The mean peak flow velocity was measured by Doppler velocimetry, and the diameter of epicardial coronary vessels was measured by quantitative coronary angiography. In the initial study, the two groups had similar vasoconstrictive responses to acetylcholine. After four weeks of exercise training, coronary-artery constriction in response to acetylcholine at a dose of 7.2 microg per minute was reduced by 54 percent (from a mean [+/-SE] decrease in the luminal diameter of 0.41+/-0.05 mm in the initial study to a decrease of 0.19+/-0.07 mm at four weeks; P<0.05 for the comparison with the change in the control group). In the exercise-training group, the increases in mean peak flow velocity in response to 0.072, 0.72, and 7.2 microg of acetylcholine per minute were 12+/-7, 36+/-11, and 78+/-16 percent, respectively, in the initial study. After four weeks of exercise, the increases in response to acetylcholine were 27+/-7, 73+/-19, and 142+/-28 percent (P<0.01 for the comparison with the control group). Coronary blood-flow reserve (the ratio of the mean peak flow velocity after adenosine infusion to the resting velocity) increased by 29 percent after four weeks of exercise (from 2.8+/-0.2 in the initial study to 3.6+/-0.2 after four weeks; P<0.01 for the comparison with the control group). Exercise training improves endothelium-dependent vasodilatation both in epicardial coronary vessels and in resistance vessels in patients with coronary artery disease.

Véronique A Cornelissen,  R. Fagard (2005)
Previous meta-analyses of randomized controlled trials on the effects of chronic dynamic aerobic endurance training on blood pressure reported on resting blood pressure only. Our aim was to perform a comprehensive meta-analysis including resting and ambulatory blood pressure, blood pressure-regulating mechanisms, and concomitant cardiovascular risk factors. Inclusion criteria of studies were: random allocation to intervention and control; endurance training as the sole intervention; inclusion of healthy sedentary normotensive or hypertensive adults; intervention duration of > or =4 weeks; availability of systolic or diastolic blood pressure; and publication in a peer-reviewed journal up to December 2003. The meta-analysis involved 72 trials, 105 study groups, and 3936 participants. After weighting for the number of trained participants and using a random-effects model, training induced significant net reductions of resting and daytime ambulatory blood pressure of, respectively, 3.0/2.4 mm Hg (P<0.001) and 3.3/3.5 mm Hg (P<0.01). The reduction of resting blood pressure was more pronounced in the 30 hypertensive study groups (-6.9/-4.9) than in the others (-1.9/-1.6; P<0.001 for all). Systemic vascular resistance decreased by 7.1% (P<0.05), plasma norepinephrine by 29% (P<0.001), and plasma renin activity by 20% (P<0.05). Body weight decreased by 1.2 kg (P<0.001), waist circumference by 2.8 cm (P<0.001), percent body fat by 1.4% (P<0.001), and the homeostasis model assessment index of insulin resistance by 0.31 U (P<0.01); HDL cholesterol increased by 0.032 mmol/L(-1) (P<0.05). In conclusion, aerobic endurance training decreases blood pressure through a reduction of vascular resistance, in which the sympathetic nervous system and the renin-angiotensin system appear to be involved, and favorably affects concomitant cardiovascular risk factors.