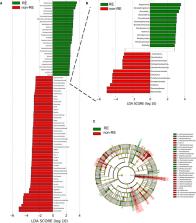 Radiation enteritis (RE) is the most common complication of radiotherapy for pelvic irradiation receivers. Herein we investigated the alterations in gut microbial profiles and their association with enteritis in patients undergoing pelvic radiotherapy. Faecal samples were collected from 18 cervical cancer patients during radiotherapy. Microbiota profiles were characterized based on 16S rRNA sequencing using the Illumina HiSeq platform. Epithelial inflammatory response was evaluated using bacterial‐epithelial co‐cultures. Dysbiosis was observed among patients with RE, which was characterized by significantly reduced α‐diversity but increased β‐diversity, relative higher abundance of Proteobacteria and Gammaproteobacteria and lower abundance of Bacteroides . Coprococcus was clearly enriched prior to radiotherapy in patients who later developed RE. Metastat analysis further revealed unique grade‐related microbial features, such as more abundant Virgibacillus and Alcanivorax in patients with mild enteritis. Additionally, using bacterial‐epithelial co‐cultures, RE patient‐derived microbiota induced epithelial inflammation and barrier dysfunction, enhanced TNF‐α and IL‐1β expression compared with control microbiota. Taken together, we define the overall picture of gut microbiota in patients with RE. Our results suggest that dysbiosis of gut microbiota may contribute to development and progression of RE. Gut microbiota can offer a set of biomarkers for prediction, disease activity evaluation and treatment selection in RE.

S Lawhon,  Sara Lawhon,  Victor Poon … (2013)
Changes in the microbial community structure are observed in individuals with intestinal inflammatory disorders. These changes are often characterized by a depletion of obligate anaerobic bacteria, whereas the relative abundance of facultative anaerobic Enterobacteriaceae increases. The mechanisms by which the host response shapes the microbial community structure, however, remain unknown. We show that nitrate generated as a by-product of the inflammatory response conferred a growth advantage to the commensal bacterium Escherichia coli in the large intestine of mice. Mice deficient in inducible nitric oxide synthase did not support the growth of E. coli by nitrate respiration, suggesting that the nitrate generated during inflammation was host-derived. Thus, the inflammatory host response selectively enhances the growth of commensal Enterobacteriaceae by generating electron acceptors for anaerobic respiration.

Systematic review: the role of the gut microbiota in chemotherapy- or radiation-induced gastrointestinal mucositis - current evidence and potential clinical applications.

Y Touchefeu,  E Montassier,  K. Nieman … (2014)
Gastrointestinal mucositis is defined as inflammation and/or ulcers of the gastrointestinal tract occurring as a complication of chemotherapy and radiation therapy, and affects about 50% of all cancer patients.

Matthew Ciorba,  Terrence E. Riehl,  M Rao … (2011)
Background The small intestinal epithelium is highly sensitive to radiation and is a major site of injury during radiation therapy and environmental overexposure. Objective To examine probiotic bacteria as potential radioprotective agents in the intestine. Methods 8-week-old C57BL/6 wild-type or knockout mice were administered probiotic by gavage for 3 days before 12 Gy whole body radiation. The intestine was evaluated for cell-positional apoptosis (6 h) and crypt survival (84 h). Results Gavage of 5×107 Lactobacillus rhamnosus GG (LGG) improved crypt survival about twofold (p<0.01); the effect was observed when administered before, but not after, radiation. Conditioned medium (CM) from LGG improved crypt survival (1.95-fold, p<0.01), and both LGG and LGG-CM reduced epithelial apoptosis particularly at the crypt base (33% to 18%, p<0.01). LGG was detected in the distal ileal contents after the gavage cycle, but did not lead to a detectable shift in bacterial family composition. The reduction in epithelial apoptosis and improved crypt survival offered by LGG was lost in MyD88−/−, TLR-2−/− and cyclo-oxygenase-2−/− (COX-2) mice but not TLR-4−/− mice. LGG administration did not lead to increased jejunal COX-2 mRNA or prostaglandin E2 levels or a change in number of COX-2-expressing cells. However, a location shift was observed in constitutively COX-2-expressing cells of the lamina propria from the villi to a position near the crypt base (villi to crypt ratio 80:20 for control and 62:38 for LGG; p<0.001). Co-staining revealed these COX-2-expressing small intestinal lamina propria cells to be mesenchymal stem cells. Conclusions LGG or its CM reduce radiation-induced epithelial injury and improve crypt survival. A TLR-2/MyD88 signalling mechanism leading to repositioning of constitutive COX-2-expressing mesenchymal stem cells to the crypt base is invoked.