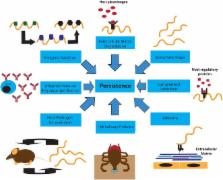 Borrelia burgdorferi sensu lato species complex is capable of establishing persistent infections in a wide variety of species, particularly rodents. Infection is asymptomatic or mild in most reservoir host species, indicating successful co-evolution of the pathogen with its natural hosts. However, infected humans and other incidental hosts can develop Lyme disease, a serious inflammatory syndrome characterized by tissue inflammation of joints, heart, muscles, skin, and CNS. Although B. burgdorferi infection induces both innate and adaptive immune responses, they are ultimately ineffective in clearing the infection from reservoir hosts, leading to bacterial persistence. Here, we review some mechanisms by which B. burgdorferi evades the immune system of the rodent host, focusing in particular on the effects of innate immune mechanisms and recent findings suggesting that T-dependent B cell responses are subverted during infection. A better understanding of the mechanisms causing persistence in rodents may help to increase our understanding of the pathogenesis of Lyme disease and ultimately aid in the development of therapies that support effective clearance of the bacterial infection by the host’s immune system.

I MacLennan (1993)
Germinal centers develop in the B cell follicles of secondary lymphoid tissues during T cell-dependent (TD) antibody responses. The B cells that give rise to germinal centers initially have to be activated outside follicles, in the T cell-rich zones in association with interdigitating cells and T cell help. After immunization with a single dose of protein-based antigen, the germinal centers formed are oligoclonal; on average three B blasts colonize each follicle. These blasts undergo massive clonal expansion and activate a site-directed hypermutation mechanism that acts on their immunoglobulin-variable (Ig-v)-region genes. Mature germinal centers are divided into dark and light zones. The proliferating blasts, centroblasts, occupy the dark zone and give rise to centrocytes that are not in cell cycle and fill the light zone. The light zone contains a rich network of follicular dendritic cells (FDC) that have the capacity to take up antigen and hold this on their surface for periods of more than a year. The antigen is held as an immune complex in a native unprocessed form; but the antigen may be taken up from FDC by B cells, which can process this and present it to T cells. Centrocytes appear to be selected by their ability to interact with antigen held on FDC. There is a high death rate among centrocytes in vivo, and when these cells are isolated in vitro, they undergo apoptosis within hours on culture. The onset of apoptosis can be delayed by cross-linking centrocytes' surface Ig, and long-term survival is achieved by signalling through their surface CD40. After activation through CD40 the centrocytes increase their surface Ig and acquire characteristics of memory and processing of antigen held on FDC and its presentation to T cells that can be induced to express CD40 ligand at the point of cognate interaction. Other signals that induce a proportion of germinal center cells to become plasma cells have also been described. Germinal centers persist for about 3 weeks following immunization, but after this, memory B blasts continue to proliferate in follicles throughout the months of T cell-dependent antibody responses. These cells are probably the source of plasma cells and memory cells required to maintain long-term antibody production and memory after the first 3 weeks of T cell-dependent antibody responses.

Robbert van der Voort,  Kaja Murali-Krishna,  Rafi Ahmed … (2003)
Chronic viral infections often result in ineffective CD8 T-cell responses due to functional exhaustion or physical deletion of virus-specific T cells. However, how persisting virus impacts various CD8 T-cell effector functions and influences other aspects of CD8 T-cell dynamics, such as immunodominance and tissue distribution, remains largely unknown. Using different strains of lymphocytic choriomeningitis virus (LCMV), we compared responses to the same CD8 T-cell epitopes during acute or chronic infection. Persistent infection led to a disruption of the normal immunodominance hierarchy of CD8 T-cell responses seen following acute infection and dramatically altered the tissue distribution of LCMV-specific CD8 T cells in lymphoid and nonlymphoid tissues. Most importantly, CD8 T-cell functional impairment occurred in a hierarchical fashion in chronically infected mice. Production of interleukin 2 and the ability to lyse target cells in vitro were the first functions compromised, followed by the ability to make tumor necrosis factor alpha, while gamma interferon production was most resistant to functional exhaustion. Antigen appeared to be the driving force for this loss of function, since a strong correlation existed between the viral load and the level of exhaustion. Further, epitopes presented at higher levels in vivo resulted in physical deletion, while those presented at lower levels induced functional exhaustion. A model is proposed in which antigen levels drive the hierarchical loss of different CD8 T-cell effector functions during chronic infection, leading to distinct stages of functional impairment and eventually to physical deletion of virus-specific T cells. These results have implications for the study of human chronic infections, where similar T-cell deletion and functional dysregulation has been observed.