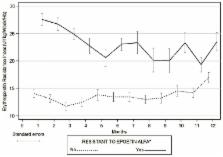 Anemia is an inevitable complication of hemodialysis, and the primary cause is erythropoietin deficiency. After diagnosis, treatment begins with an erythropoiesis-stimulating agent (ESA). However, some patients remain anemic even after receiving this medication. This study aimed to investigate the factors associated with resistance to recombinant human erythropoietin therapy with epoetin alfa (αEPO). We performed a prospective, longitudinal study of hemodialysis patients receiving treatment with αEPO at our reference hospital from July 2015 to June 2016. Clinical data was collected, and the response to αEPO treatment was evaluated using the erythropoietin resistance index (ERI). The ERI was defined as the weekly weight-adjusted αEPO dose (U/kg per week)/hemoglobin level (g/dL). A longitudinal linear regression model was fitted with random effects to verify the relationships between clinical and laboratory data and ERI. We enrolled 99 patients (average age, 45.7 (±17.6) years; male, 51.5%; 86.8% with hypertension). The ERI showed a significant positive association with serum ferritin and C-reactive protein, percentage interdialytic weight gain, and continuous usage of angiotensin receptor blocker (ARB) hypertension medication. The ERI was negatively associated with serum iron and albumin, age, urea reduction ratio, and body mass index. Our findings indicate that resistance to αEPO was related to a low serum iron reserve, an inflammatory state, poor nutritional status, and continuous usage of ARBs.

Kamyar Kalantar-Zadeh,  Charles McAllister,  Robert Lehn … (2003)
Elements of malnutrition-inflammation complex syndrome (MICS) may blunt the responsiveness of anemia of end-stage renal disease (ESRD) to recombinant human erythropoietin (EPO). The authors examined cross-sectional associations between the required dose of EPO within a 13-week interval as prescribed by practicing nephrologists who were blind to the study and several laboratory values known to be related to nutrition and/or inflammation, as well as the malnutrition-inflammation score (MIS), which is a fully quantitative assessment tool based on the subjective global assessment of nutrition. A total of 339 maintenance hemodialysis (MHD) outpatients, including 181 men, who were aged 54.7 +/- 14.5 years (mean +/- SD), who had undergone dialysis for 36.3 +/- 33.2 months, were selected randomly from 7 DaVita dialysis units in Los Angeles South/East Bay area. The average weekly dose of administered recombinant human EPO within a 13-week interval was 217 +/- 187 U/kg. Patients were receiving intravenous iron supplementation (iron gluconate or dextran) averaging 39.5 +/- 47.5 mg/wk. The MIS and serum concentrations of high-sensitivity C-reactive protein, interleukin 6 (IL-6), tumor necrosis factor-alpha, and lactate dehydrogenase had positive correlation with required EPO dose and EPO responsiveness index (EPO divided by hemoglobin), whereas serum total iron binding capacity (TIBC), prealbumin and total cholesterol, as well as blood lymphocyte count had statistically significant but negative correlations with indices of refractory anemia. Most correlations remained significant even after multivariate adjustment for case-mix and anemia factors and other relevant covariates. Similar associations were noticed across EPO per body weight tertiles via analysis of variance and after estimating odds ratio for higher versus lower tertile via logistic regression after same case-mix adjustment. The existence of elements of MICS as indicated by a high MIS and increased levels of proinflammatory cytokines such as IL-6 as well as decreased nutritional values such as low serum concentrations of total cholesterol, prealbumin, and TIBC correlates with EPO hyporesponsiveness in MHD patients.