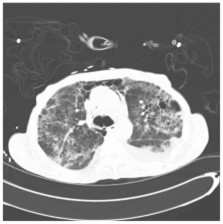 The discovery of the Human Immunodeficiency Virus (HIV) was led by the merge of clustered cases of Pneumocystis jirovecii Pneumonia (PCP) in otherwise healthy people in the early 80’s. 1, 2 In the face of sophisticated treatment now available for HIV infection, life expectancy approaches normal limits. It has dramatically changed the natural course of HIV from a nearly fatal infection to a chronic disease. 3– 5 However, PCP still remains a relatively common presentation of uncontrolled HIV. Despite the knowledge and advances gained in the prevention and management of PCP infection, it continues to have high morbidity and mortality rates. Trimethoprim-sulfamethoxazole (TMP-SMZ) remains as the recommended first-line treatment. Alternatives include pentamidine, dapsone plus trimethoprim, clindamycin administered with primaquine, and atovaquone. For optimal management, clinicians need to be familiar with the advantages and disadvantages of the available drugs. The parameters used to classify severity of infection are also important, as it is well known that the adjunctive use of steroids in moderate to severe cases have been shown to significantly improve outcome. Evolving management practices, such as the successful institution of early antiretroviral therapy, may further enhance overall survival rates.

H M Schanker,  R. Schroff,  M Gottlieb … (1981)
Four previously healthy homosexual men contracted Pneumocystis carinii pneumonia, extensive mucosal candidiasis, and multiple viral infections. In three of the patients these infections followed prolonged fevers of unknown origin. In all four cytomegalovirus was recovered from secretions. Kaposi's sarcoma developed in one patient eight months after he presented with esophageal candidiasis. All patients were anergic and lymphopenic; they had no lymphocyte proliferative responses to soluble antigens, and their responses to phytohemagglutinin were markedly reduced. Monoclonal-antibody analysis of peripheral-blood T-cell subpopulations revealed virtual elimination of the Leu-3 / helper/inducer subset, an increased percentage of the Leu-2 + suppressor/cytoxic subset, and an increased percentage of cells bearing the thymocyte-associated antigen T10. The inversion of the T/ helper to suppressor/cytotoxic ratio suggested that cytomegalovirus infection was an important factor in the pathogenesis of the immunodeficient state. A high level of exposure of male homosexuals to cytomegalovirus-infected secretions may account for the occurrence of this immune deficiency.