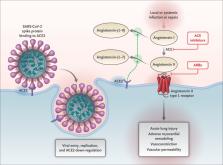 Wei-jie Guan, Zheng-yi Ni, Yu Hu … (2020)
Abstract Background Since December 2019, when coronavirus disease 2019 (Covid-19) emerged in Wuhan city and rapidly spread throughout China, data have been needed on the clinical characteristics of the affected patients. Methods We extracted data regarding 1099 patients with laboratory-confirmed Covid-19 from 552 hospitals in 30 provinces, autonomous regions, and municipalities in mainland China through January 29, 2020. The primary composite end point was admission to an intensive care unit (ICU), the use of mechanical ventilation, or death. Results The median age of the patients was 47 years; 41.9% of the patients were female. The primary composite end point occurred in 67 patients (6.1%), including 5.0% who were admitted to the ICU, 2.3% who underwent invasive mechanical ventilation, and 1.4% who died. Only 1.9% of the patients had a history of direct contact with wildlife. Among nonresidents of Wuhan, 72.3% had contact with residents of Wuhan, including 31.3% who had visited the city. The most common symptoms were fever (43.8% on admission and 88.7% during hospitalization) and cough (67.8%). Diarrhea was uncommon (3.8%). The median incubation period was 4 days (interquartile range, 2 to 7). On admission, ground-glass opacity was the most common radiologic finding on chest computed tomography (CT) (56.4%). No radiographic or CT abnormality was found in 157 of 877 patients (17.9%) with nonsevere disease and in 5 of 173 patients (2.9%) with severe disease. Lymphocytopenia was present in 83.2% of the patients on admission. Conclusions During the first 2 months of the current outbreak, Covid-19 spread rapidly throughout China and caused varying degrees of illness. Patients often presented without fever, and many did not have abnormal radiologic findings. (Funded by the National Health Commission of China and others.)

Clinical course and risk factors for mortality of adult inpatients with COVID-19 in Wuhan, China: a retrospective cohort study

Fei Zhou, Ting Yu, Ronghui Du … (2020)
Summary Background Since December, 2019, Wuhan, China, has experienced an outbreak of coronavirus disease 2019 (COVID-19), caused by the severe acute respiratory syndrome coronavirus 2 (SARS-CoV-2). Epidemiological and clinical characteristics of patients with COVID-19 have been reported but risk factors for mortality and a detailed clinical course of illness, including viral shedding, have not been well described. Methods In this retrospective, multicentre cohort study, we included all adult inpatients (≥18 years old) with laboratory-confirmed COVID-19 from Jinyintan Hospital and Wuhan Pulmonary Hospital (Wuhan, China) who had been discharged or had died by Jan 31, 2020. Demographic, clinical, treatment, and laboratory data, including serial samples for viral RNA detection, were extracted from electronic medical records and compared between survivors and non-survivors. We used univariable and multivariable logistic regression methods to explore the risk factors associated with in-hospital death. Findings 191 patients (135 from Jinyintan Hospital and 56 from Wuhan Pulmonary Hospital) were included in this study, of whom 137 were discharged and 54 died in hospital. 91 (48%) patients had a comorbidity, with hypertension being the most common (58 [30%] patients), followed by diabetes (36 [19%] patients) and coronary heart disease (15 [8%] patients). Multivariable regression showed increasing odds of in-hospital death associated with older age (odds ratio 1·10, 95% CI 1·03–1·17, per year increase; p=0·0043), higher Sequential Organ Failure Assessment (SOFA) score (5·65, 2·61–12·23; p<0·0001), and d-dimer greater than 1 μg/mL (18·42, 2·64–128·55; p=0·0033) on admission. Median duration of viral shedding was 20·0 days (IQR 17·0–24·0) in survivors, but SARS-CoV-2 was detectable until death in non-survivors. The longest observed duration of viral shedding in survivors was 37 days. Interpretation The potential risk factors of older age, high SOFA score, and d-dimer greater than 1 μg/mL could help clinicians to identify patients with poor prognosis at an early stage. Prolonged viral shedding provides the rationale for a strategy of isolation of infected patients and optimal antiviral interventions in the future. Funding Chinese Academy of Medical Sciences Innovation Fund for Medical Sciences; National Science Grant for Distinguished Young Scholars; National Key Research and Development Program of China; The Beijing Science and Technology Project; and Major Projects of National Science and Technology on New Drug Creation and Development.