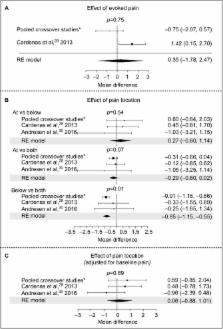 Understanding factors associated with high placebo responses in clinical trials increases the likelihood of detecting a meaningful treatment effect. The aim of the present study was to identify subject-level factors that contribute to placebo variability in patients with neuropathic pain due to spinal cord injury (SCI).

Multiple regression analysis of patient data from randomized, double-blind, placebo-controlled trials (duration >4 weeks) involving individuals with SCI was performed. Patient demographics, as well as injury and pain characteristics were examined for their association with changes in pain rating from baseline to the end of the trial (i.e., placebo response). The overall effect of individual predictors was quantified with meta-analysis statistics.

A total of 276 patients with SCI from six studies were included in the analysis. Based on the meta-analysis of subject-level predictors, larger placebo responses were associated with male subjects (β=0.635; standard error [SE]=0.262; p=0.016) and higher baseline pain (β=−0.146; SE=0.073; p=0.044). There were no significant effects for injury characteristics (i.e., severity, level, and time since injury) or pain characteristics (i.e., location and evoked). No significant publication bias was detected.

The levels of evidence and their role in evidence-based medicine.

Anoushka Singh,  Lindsay Tetreault,  Suhkvinder Kalsi-Ryan … (2014)
Background Spinal cord injury (SCI) is a traumatic event that impacts a patient’s physical, psychological, and social well-being and places substantial financial burden on health care systems. To determine the true impact of SCI, this systematic review aims to summarize literature reporting on either the incidence or prevalence of SCI. Methods A systematic search was conducted using PubMed, MEDLINE, MEDLINE in process, EMBASE, Cochrane Controlled Trial Register, and Cochrane Database of Systematic Reviews to identify relevant literature published through June 2013. We sought studies that provided regional, provincial/state, or national data on the incidence of SCI or reported estimates of disease prevalence. The level of evidence of each study was rated using a scale that evaluated study design, methodology, sampling bias, and precision of estimates. Results The initial search yielded 5,874 articles, 48 of which met the inclusion criteria. Forty-four studies estimated the incidence of SCI and nine reported the prevalence, with five discussing both. Of the incidence studies, 14 provided figures at a regional, ten at a state or provincial level and 21 at a national level. The prevalence of SCI was highest in the United States of America (906 per million) and lowest in the Rhone-Alpes region, France (250 per million) and Helsinki, Finland (280 per million). With respect to states and provinces in North America, the crude annual incidence of SCI was highest in Alaska (83 per million) and Mississippi (77 per million) and lowest in Alabama (29.4 per million), despite a large percentage of violence injuries (21.2%). Annual incidences were above 50 per million in the Hualien County in Taiwan (56.1 per million), the central Portugal region (58 per million), and Olmsted County in Minnesota (54.8 per million) and were lower than 20 per million in Taipei, Taiwan (14.6 per million), the Rhone-Alpes region in France (12.7 per million), Aragon, Spain (12.1 per million), Southeast Turkey (16.9 per million), and Stockholm, Sweden (19.5 per million). The highest national incidence was 49.1 per million in New Zealand, and the lowest incidences were in Fiji (10.0 per million) and Spain (8.0 per million). The majority of studies showed a high male-to-female ratio and an age of peak incidence of younger than 30 years old. Traffic accidents were typically the most common cause of SCI, followed by falls in the elderly population. Conclusion This review demonstrates that the incidence, prevalence, and causation of SCI differs between developing and developed countries and suggests that management and preventative strategies need to be tailored to regional trends. The rising aging population in westernized countries also indicates that traumatic SCI secondary to falls may become an increasing public health challenge and that incidence among the elderly may rise with increasing life expectancy.

Matrix product ansatz for Fermi fields in one dimension