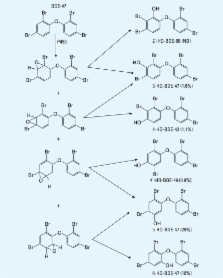 A previous study from our laboratory showed that polybrominated diphenyl ethers (PBDEs) were metabolized to hydroxylated PBDEs (HO-PBDEs) in mice and that para-HO-PBDEs were the most abundant and, potentially, the most toxic metabolites.

The goal of this study was to determine the concentrations of HO-PBDEs in blood from pregnant women, who had not been intentionally or occupationally exposed to these flame retardants, and from their newborn babies.

Twenty human blood samples were obtained from a hospital in Indianapolis, Indiana, and analyzed for both PBDEs and HO-PBDEs using electron-capture negative-ionization gas chromatographic mass spectrometry.

The quite different PBDE metabolite pattern observed in humans versus mice indicates that different enzymes might be involved in the metabolic process. Although the levels of HO-PBDE metabolites found in human blood were low, these metabolites seemed to be accumulating.

Polybrominated diphenyl ethers in the environment and in people: a meta-analysis of concentrations.

Potent competitive interactions of some brominated flame retardants and related compounds with human transthyretin in vitro.

E. Marsh,  Magnus Jakobsson,  José van Rossum … (2000)
Brominated flame retardants such as polybrominated diphenyl ethers (PBDEs), pentabromophenol (PBP), and tetrabromobisphenol A (TBBPA) are produced in large quantities for use in electronic equipment, plastics, and building materials. Because these compounds have some structural resemblance to the thyroid hormone thyroxine (T(4)), it was suggested that they may interfere with thyroid hormone metabolism and transport, e.g., by competition with T(4) on transthyretin (TTR). In the present study, we investigated the possible interaction of several brominated flame retardants with T(4) binding to TTR in an in vitro competitive binding assay, using human TTR and 125 I-T(4) as the displaceable radioligand. Compounds were tested in at least eight different concentrations ranging from 1.95 to 500 nM. In addition, we investigated the structural requirements of these and related ligands for competitive binding to TTR. We were able to show very potent competition binding for TBBPA and PBP (10.6- and 7.1-fold stronger than the natural ligand T(4), respectively). PBDEs were able to compete with T(4)-TTR binding only after metabolic conversion by induced rat liver microsomes, suggesting an important role for hydroxylation. Brominated bisphenols with a high degree of bromination appeared to be more efficient competitors, whereas chlorinated bisphenols were less potent compared to their brominated analogues. These results indicate that brominated flame retardants, especially the brominated phenols and tetrabromobisphenol A, are very potent competitors for T(4) binding to human transthyretin in vitro and may have effects on thyroid hormone homeostasis in vivo comparable to the thyroid-disrupting effects of PCBs.

Rachel Taylor,  Kevin Crofton,  Michael Devito … (2002)
The objective of the current study was to characterize the effects of DE-71 (a commercial polybrominated diphenyl ether mixture containing mostly tetra- and penta-bromodiphenyl ethers) on thyroid hormones and hepatic enzyme activity in offspring, following perinatal maternal exposure. Primiparous Long-Evans rats were orally administered DE-71 (0, 1, 10, and 30 mg/kg/day) in corn oil from gestation day (GD) 6 to postnatal day (PND) 21. Serum and liver samples obtained from dams (GD 20 and PND 22), fetuses (GD 20), and offspring (PNDs 4, 14, 36, and 90) were analyzed for circulating total serum thyroxine (T(4)) and triiodothyronine (T(3)), or hepatic microsomal ethoxy- and pentoxy-resorufin-O-deethylase (EROD and PROD), and uridine diphosphoglucuronosyl transferase (UDPGT) activity. There were no significant effects of treatment on maternal body weight gain, litter size, or sex ratio, nor were there any effects on any measures of offspring viability or growth. Serum T(4) was reduced in a dose-dependent manner in fetuses on GD 20 (at least 15%) and offspring on PND 4 and PND 14 (50 and 64% maximal in the 10 and 30 mg/kg/day groups, respectively), but recovered to control levels by PND 36. Reduction in serum T(4) was also noted in GD 20 dams (48% at highest dose), as well as PND 22 dams (44% at highest dose). There was no significant effect of DE 71 on T(3) concentrations at any time in the dams or the offspring. Increased liver to body weight ratios in offspring were consistent with induction of EROD (maximal 95-fold), PROD (maximal 26-fold) or UDPGT (maximal 4.7-fold). Induction of PROD was similar in both dams and offspring; however, EROD and UDPGT induction were much greater in offspring compared to dams (EROD = 3.8-fold; UDPGT = 0.5-fold). These data support the conclusion that DE-71 is an endocrine disrupter in rats during development.

Publisher ID: ehp-117-93
DOI: 10.1289/ehp.11660
PMC ID: 2627872
PubMed ID: 19165393
Copyright statement: This is an Open Access article: verbatim copying and redistribution of this article are permitted in all media for any purpose, provided this notice is preserved along with the article's original DOI.