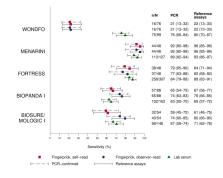 Accurate antibody tests are essential to monitor the SARS-CoV-2 pandemic. Lateral flow immunoassays (LFIAs) can deliver testing at scale. However, reported performance varies, and sensitivity analyses have generally been conducted on serum from hospitalised patients. For use in community testing, evaluation of finger-prick self-tests, in non-hospitalised individuals, is required.

Sensitivity analysis was conducted on 276 non-hospitalised participants. All had tested positive for SARS-CoV-2 by reverse transcription PCR and were ≥21 days from symptom onset. In phase I, we evaluated five LFIAs in clinic (with finger prick) and laboratory (with blood and sera) in comparison to (1) PCR-confirmed infection and (2) presence of SARS-CoV-2 antibodies on two ‘in-house’ ELISAs. Specificity analysis was performed on 500 prepandemic sera. In phase II, six additional LFIAs were assessed with serum.

95% (95% CI 92.2% to 97.3%) of the infected cohort had detectable antibodies on at least one ELISA. LFIA sensitivity was variable, but significantly inferior to ELISA in 8 out of 11 assessed. Of LFIAs assessed in both clinic and laboratory, finger-prick self-test sensitivity varied from 21% to 92% versus PCR-confirmed cases and from 22% to 96% versus composite ELISA positives. Concordance between finger-prick and serum testing was at best moderate (kappa 0.56) and, at worst, slight (kappa 0.13). All LFIAs had high specificity (97.2%–99.8%).

LFIA sensitivity and sample concordance is variable, highlighting the importance of evaluations in setting of intended use. This rigorous approach to LFIA evaluation identified a test with high specificity (98.6% (95%CI 97.1% to 99.4%)), moderate sensitivity (84.4% with finger prick (95% CI 70.5% to 93.5%)) and moderate concordance, suitable for seroprevalence surveys.

Hai-qiong Yu,  Bao-qing Sun,  Zhang-fu Fang … (2020)
In comparison to severe acute respiratory syndrome coronavirus (SARS-CoV), SARS-CoV-2 appears to be more contagious [1], and Coronavirus Disease 2019 (COVID-19) patients demonstrate varied clinical manifestations distinct from those seen in patients with SARS-CoV and middle east respiratory syndrome coronavirus (MERS-CoV) infections [2]. Collective results from the clinical and epidemiological observations suggest a distinct viral-host interaction in COVID-19 patients. Profiling of the antibody response during SARS-CoV-2 infection may help improve our understanding of the viral-host interaction and the immunopathological mechanisms of the disease.

Sukwan Handali,  Sarah Gwyn,  Alexandria Mitchell … (2016)
We describe here a lateral flow-based assay (LFA) for the detection of antibodies against immunodominant antigen Pgp3 from Chlamydia trachomatis, the causative agent of urogenital chlamydia infection and ocular trachoma. Optimal signal detection was achieved when the gold-conjugate and test line contained Pgp3, creating a dual sandwich capture assay. The LFA yielded positive signals with serum and whole blood but not with eluted dried blood spots. For serum, the agreement of the LFA with the non-reference multiplex assay was 96%, the specificity using nonendemic pediatric sera was 100%, and the inter-rater agreement was κ=0.961. For whole blood, the agreement of LFA with multiplex was 81.5%, the specificity was 100%, and the inter-rater agreement was κ=0.940. The LFA was tested in a field environment and yielded similar results to those from laboratory-based testing. These data show the successful development of a lateral flow assay for detection of antibodies against Pgp3 with reliable use in field settings, which would make antibody-based testing for trachoma surveillance highly practical, especially after cessation of trachoma elimination programs.

Efficacy and safety of glecaprevir/pibrentasvir in patients with chronic hepatitis C virus genotype 5 or 6 infection (ENDURANCE-5,6): an open-label, multicentre, phase 3b trial

This article is made freely available for use in accordance with BMJ’s website terms and conditions for the duration of the covid-19 pandemic or until otherwise determined by BMJ. You may use, download and print the article for any lawful, non-commercial purpose (including text and data mining) provided that all copyright notices and trade marks are retained.