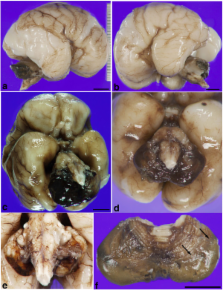 Cerebellar hemorrhagic injury (CHI) is being recognized more frequently in premature infants. However, much of what we know about CHI neuropathology is from autopsy studies that date back to a prior era of neonatal intensive care. To update and expand our knowledge of CHI we reviewed autopsy materials and medical records of all live-born preterm infants (<37 weeks gestation) autopsied at our institution from 1999–2010 who had destructive hemorrhagic injury to cerebellar parenchyma (n = 19) and compared them to matched non-CHI controls (n = 26).

CHI occurred at a mean gestational age of 25 weeks and involved the ventral aspect of the posterior lobe in almost all cases. CHI arose as a large hemorrhage or as multiple smaller hemorrhages in the emerging internal granule cell layer of the developing cortex or in the nearby white matter. Supratentorial germinal matrix hemorrhage occurred in 95% (18/19) of CHI cases compared to 54% (14/26) of control cases (p = 0.003). The cerebellar cortex frequently showed focal neuronal loss and gliosis (both 15/19, 79%) in CHI cases compared to control cases (both 1/26, 4% p < 0.0001). The cerebellar dentate had more neuronal loss (8/15, 53%) and gliosis (9/15, 60%) in CHI cases than controls (both 0/23, 0%; p < 0.0001). The inferior olivary nuclei showed significantly more neuronal loss in CHI (10/17, 59%) than in control cases (5/26, 19%) (p = 0.0077). All other gray matter sites examined showed no significant difference in the incidence of neuronal loss or gliosis between CHI and controls.

We favor the possibility that CHI represents a primary hemorrhage arising due to the effects of impaired autoregulation in a delicate vascular bed. The incidences of neuronal loss and gliosis in the inferior olivary and dentate nuclei, critical cerebellar input and output structures, respectively were higher in CHI compared to control cases and may represent a transsynpatic degenerative process. CHI occurs during a critical developmental period and may render the cerebellum vulnerable to additional deficits if cerebellar growth and neuronal connectivity are not established as expected. Therefore, CHI has the potential to significantly impact neurodevelopmental outcome in survivors.

Incidence and evolution of subependymal and intraventricular hemorrhage: a study of infants with birth weights less than 1,500 gm.

H Koffler,  L Papile,  R Burstein … (1978)
We have performed brain scanning by computed tomography on 46 consecutive live-born infants whose birth weights were less than 1,500 gm; 20 of them had evidence of cerebral intraventricular hemorrhage. Nine of the 29 infants who survived had IVH. Four grades of IVH were identified. Grade I and II lesions resolved spontaneously, but there was prominence of the interhemispheric fissue on CT of the infants at six months of age. Hydrocephalus developed in infants with Grade III and IV lesions. Seven of the surviving infants with IVH did not have clinical evidence of hemorrhage. There were no significant differences between the infants with and without IVH in birth weight, gestational age, one- and five-minute Apgar scores, or the need for resuscitation at birth or for subsequent respiratory assistance.

Bradley Peterson (2000)
Preterm infants have a high prevalence of long-term cognitive and behavioral disturbances. However, it is not known whether the stresses associated with premature birth disrupt regionally specific brain maturation or whether abnormalities in brain structure contribute to cognitive deficits. To determine whether regional brain volumes differ between term and preterm children and to examine the association of regional brain volumes in prematurely born children with long-term cognitive outcomes. Case-control study conducted in 1998 and 1999 at 2 US university medical schools. A consecutive sample of 25 eight-year-old preterm children recruited from a longitudinal follow-up study of preterm infants and 39 term control children who were recruited from the community and who were comparable with the preterm children in age, sex, maternal education, and minority status. Volumes of cortical subdivisions, ventricular system, cerebellum, basal ganglia, corpus callosum, amygdala, and hippocampus, derived from structural magnetic resonance imaging scans and compared between preterm and term children; correlations of regional brain volumes with cognitive measures (at age 8 years) and perinatal variables among preterm children. Regional cortical volumes were significantly smaller in the preterm children, most prominently in sensorimotor regions (difference: left, 14.6%; right, 14.3% [P<.001 for both]) but also in premotor (left, 11.2%; right, 12.6% [P<.001 for both]), midtemporal (left, 7.4% [P =.01]; right, 10.2% [P<.001]), parieto-occipital (left, 7.9% [P =.01]; right, 7.4% [P =.005]), and subgenual (left, 8.9% [P =.03]; right, 11.7% [P =.01]) cortices. Preterm children's brain volumes were significantly larger (by 105. 7%-271.6%) in the occipital and temporal horns of the ventricles (P<. 001 for all) and smaller in the cerebellum (6.7%; P =.02), basal ganglia (11.4%-13.8%; P

Does cerebellar injury in premature infants contribute to the high prevalence of long-term cognitive, learning, and behavioral disability in survivors?