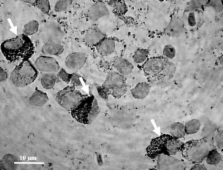 The effects of cadmium and copper on activity of common carp head kidney hematopoietic tissue were evaluated. The fish were subjected to short-term (3 h, Cd-s and Cu-s) or long-term (4 weeks, Cd-l and Cu-l) exposures to 100 % 96hLC 50 or 10 % 96hLC 50, respectively. Head kidneys were isolated weekly from 5 fish of each group for 4 weeks (post-short-term exposure and during long-term exposure). Percentage of early blast cells among the hematopoietic precursors was calculated. Proliferative and apoptotic activity were evaluated using immunocytochemical staining for proliferating cell nuclear antigen (PCNA) and caspase 3, respectively. Hematopoietic activity was calculated as the ratio of proliferating to apoptotic cells. All metal exposures induced an increase in frequency of early blast cells. The frequency of proliferating (PCNA-positive) cells also significantly increased. A considerable and significant increase in the frequency of apoptotic cells was the most pronounced effect of metal exposures. Both short-term and long-term treatments caused similar effects, but in case of Cd exposures, the reaction was more pronounced. All metal exposures reduced hematopoietic potential of fish measured as the ratio of proliferating to apoptotic precursor cell frequency. However, in all cases, hematopoietic activity was higher than 1 showing that the rate of repair of hematopoietic tissue prevailed over destruction.

Phylogeny and ontogeny of fish leucocytes.

Jan Rombout,  S Picchietti,  Heidi B T Huttenhuis … (2005)
In contrast to higher vertebrates, most fish species hatch at the embryonic stage of life. Consequently, they have to defend against a variety of micro-organisms living in their aquatic environment. This paper is focussed on the development of leucocytes functioning within this early innate system and later on in the acquired immune system (B and T cells). Most of the data are derived from cyprinid fish (zebrafish, carp), which are excellent models to study early ontogeny. Attention is also paid to the phylogeny of leucocytes, with special attention to early chordates. It is clear that young fish use innate mechanisms during the first weeks/months of their development. In zebrafish, a variety of hematopoietic genes have been sequenced which allow a detailed picture of the development of the distinct leucocytes and their precursors. In cyprinids and sea bass, the thymus is the first lymphoid organ and T cells appear to be selected there much earlier than the first detection of T cell-dependent antibody responses. The first B cells are most probably generated in head kidney. Although T cells are selected earlier than B cells, T cell independent responses occur earlier than the T cell-dependent responses. The very early (pre-thymic) appearance of T-like cells in gut of sea bass and carp suggests an extra-thymic origin of these cells. However, B cells populate the GALT much later than spleen or kidney, indicating a rather late appearance of mucosal immunity. The first plasma cells are found long after the intake of food in cyprinids, but in many marine fish they appear around the first food intake. In general, acquired immunity is not correlated to food intake.

S S Habeebu,  C. Klaassen,  Jianhua Liu (1998)
Apoptosis is a process of active cell death, distinct from necrosis and characterized by specific morphological and biochemical features. Although the acute hepatotoxic effects of cadmium (Cd) are well described, little is known about the occurrence of apoptosis in Cd toxicity. Therefore, mice were injected with 5-60 mumol/kg i.p. of Cd and their livers were removed 1.5-48 h later and examined by light microscopy. Cd induced both a time- and dose-dependent increase in apoptotic index, severity of necrosis, and mitotic index. Apoptotic index peaked at 9-14 h after Cd administration and then decreased. The time course of apoptotic DNA fragmentation index, monitored by quantification of oligonucleosomal DNA fragments, correlated with the results obtained by histopathological analysis and a commercial in situ apoptotic DNA detection kit. Liver necrosis, as demonstrated by histology and serum alanine aminotransferase and sorbitol dehydrogenase assays, was most severe 14-48 h after Cd injection. Apoptosis was decreasing by 24 h while necrosis persisted. Replacement of liver tissue by blood lakes (peliosis hepatis) was observed after 14 h. The mitotic index increased gradually with time, indicating compensatory liver cell regeneration. There was a progressive increase in the severity of necrosis, apoptotic index, and mitotic index with increasing dose of Cd. These data demonstrate that apoptosis is a major mode of elimination of critically damaged cells in acute Cd hepatotoxicity in the mouse, and it precedes necrosis.

The phylogenetic odyssey of the erythrocyte. III. Fish, the lower vertebrate experience.

C A Glomski,  J Tamburlin,  M Chainani (1992)
The piscine erythrocyte can be considered the prototype of the red cells that are distributed among inframmalian vertebrates. It is a permanently nucleated, hemoglobin-ladened, oval, flattened, biconvex disc. Ultrastructurally it demonstrates a cytoskeleton comprised of a marginal band and a membrane skeleton which are responsible for the erythrocyte's conversion to an ellipsoid during morphogenesis and endow it with resilience to physical trauma. Erythropoiesis initiates in the yolk sac, followed in many fishes, by the intermediate cell mass. These sites are the sources of the transitory, primitive generation red cells which apparently make their first phylogenetic appearance in fishes and which are subsequently represented in all classes of vertebrates including mammals. Production of definitive generation erythrocytes is centered in evolutionary "pre-splenic" tissue of the gastrointestinal tract or in the spleen in cyclostomes, dipnoi, and chondrichthyes while in teleosts it is typically located in the kidneys with or without splenic participation. The blood is a major site of erythrocyte maturation in the lower fishes and exhibits significant numbers of immature erythroid cells plus occasional mitotic figures. Some teleosts also circulate developing erythroid cells. Certain fishes have occasional circulating erythroplastids, conceptually a portent of phylogenetic changes in higher vertebrates. Remarkably, some bristlemouths have denucleated erythrocytes exclusively in the circulation. The largest piscine erythrocytes are found in the dipnoi, myxines, and chondrichthyes. Primitive fish with the exception of the endothermic sharks tend to have lower hemoglobin concentrations than the modern teleosteans. The very highest hemoglobin concentrations are attained by the endothermic scombrids. Erythrocyte-based data have a broad extent and are variably affected by age, sex, season and environment. This report includes a substantial selection of illustrations (fish species and rbc micrographs).