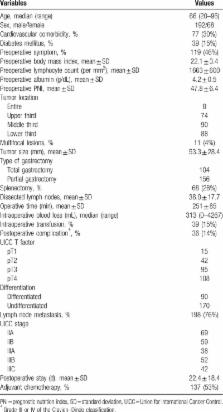 Evidence indicates that impaired immunocompetence and nutritional status adversely affect short-term and long-term outcomes of patients with cancer. We aimed to evaluate the clinical significance of preoperative immunocompetence and nutritional status according to Onodera's prognostic nutrition index (PNI) among patients who underwent curative gastrectomy for gastric cancer (GC).

The mean preoperative PNI was 47.8. The area under the curve for predicting complications was greater for PNI compared with the serum albumin concentration or lymphocyte count. Multivariate analysis identified preoperative PNI < 47 as an independent predictor of postoperative morbidity. Moreover, patients in the PNI < 47 group experienced significantly shorter overall and disease-free survival compared with those in the PNI ≥ 47 group, notably because of a higher prevalence of hematogenous metastasis as the initial recurrence. Subgroup analysis according to disease stage and postoperative adjuvant treatment revealed that the prognostic significance of PNI was more apparent in patients with stage II GC and in those who received adjuvant chemotherapy.

Preoperative PNI is easy and inexpensive to determine, and our findings indicate that PNI served as a significant predictor of postoperative morbidity, prognosis, and recurrence patterns of patients with stage II/III GC.

T. Fujii,  Kimberly Nakao,  Y Kodera … (2011)
Nutritional status plays an important role in the incidence of postoperative complications and the prognosis of various tumours. The prognostic value of preoperative nutritional factors in patients with pancreatic cancer is not known. This retrospective study included 268 patients who underwent resection for adenocarcinoma of the pancreas. The predictive value of preoperative nutritional status for postoperative outcome (survival, complications) was assessed. Nutritional factors included the three constitutional indices, serum albumin and Onodera's prognostic nutrition index (PNI), calculated as 10 × serum albumin (g/dl) + 0·005× total lymphocyte count (per mm(3)). In multivariable analysis preoperative low PNI (but not low albumin) was an independent prognostic factor for poor survival: hazard ratio (HR) 1·73 (95 per cent confidence interval (c.i.) 1·21 to 2·47). The accuracy of a PNI value of less than 45 as cut-off for clinically significant preoperative malnutrition in predicting 1- or 2-year survival after surgery was, however, limited (66·4 and 56·3 per cent respectively). Low preoperative albumin concentration and PNI were significantly associated with postoperative complications: odds ratio 1·98 (95 per cent c.i. 1·18 to 3·32) and 2·14 (1·23 to 3·73) respectively. Low PNI and low body mass index were independently associated with pancreatic fistula: HR 2·52 (1·37 to 4·63) and 0·40 (0·17 to 0·93) respectively. The PNI is associated with overall survival and postoperative complications, in particular pancreatic fistula, in patients with pancreatic cancer. The moderate accuracy of PNI as a predictor of survival limits its clinical use.

Sohei Matsumoto,  K Migita,  Keigo Saeki … (2013)
The aim of this study was to investigate the impact of the prognostic nutritional index (PNI) on the long-term outcomes in gastric cancer patients. This study reviewed the medical records of 548 patients with gastric cancer who underwent gastrectomy. The PNI was calculated as 10 × serum albumin (g/dl) + 0.005 × total lymphocyte count (per mm(3)). The receiver operating characteristic (ROC) curve analysis was performed to determine the cutoff value of the PNI. The multivariate analysis was performed to identify the prognostic factors. The mean PNI was significantly lower in patients with T3-T4 tumors (P < 0.001) and lymph node metastasis (P < 0.001) than in those without such factors. Patients who had a postoperative complication had a lower mean PNI than those without (P = 0.023). When the ROC curve analysis was performed, the optimal cutoff value of the PNI for predicting the 5-year survival was 48. In the multivariate analysis, a low PNI was an independent predictor for poor overall survival (P < 0.001). In the subgroup analysis, the overall and relapse-free survival rates were significantly lower in the PNI-low group than in the PNI-high group among patients with stage I and stage III disease. The PNI is a simple and useful marker for predicting the long-term outcomes of gastric cancer patients independent of the tumor stage. Based on our results, we suggest that the PNI should be included in the routine assessment of gastric cancer patients.