Granulomatosis with polyangiitis presenting as a solitary renal mass: A case report with imaging and literature review 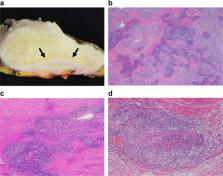 Granulomatosis with polyangiitis (GPA) manifests as necrotizing granulomatous inflammatory masses in the nasal cavity, paranasal sinuses, and lungs. However, a mass in the kidney is extremely rare. We herein report a case of GPA that presented as a solitary mass in the left kidney. The patient was a man in his 60s. A 2.5-cm solitary mass was incidentally discovered in the left kidney at another hospital and was followed-up. Eight months later, the mass had enlarged, and the patient visited our hospital for further examination and treatment. The mass was hypovascular, with unclear margins on contrast-enhanced computed tomography (CT). The signal of the mass was nonuniform and iso- to slightly hypo-intense on T2-weighted and diffusion-weighted magnetic resonance imaging (MRI). Enlarged para-aortic lymph nodes were also detected on the CT and MRI. Based on imaging, malignant tumors were suspected, and nephrectomy was performed. The pathological diagnosis was GPA. We performed a literature review of this rare renal manifestation and present a summary of reported imaging findings. If a hypovascular renal mass with an unclear margin can be found in those with GPA, unnecessary operations may be avoided by actively promoting renal biopsy.

Clinic manifestations in granulomatosis with polyangiitis.

A Greco,  C. Marinelli,  M Fusconi … (2016)
Granulomatosis with polyangiitis (GPA), formerly Wegener's granulomatosis (WG), is an uncommon immunologically mediated systemic small-vessel vasculitis that is pathologically characterised by an inflammatory reaction pattern (necrosis, granulomatous inflammation and vasculitis) that occurs in the upper and lower respiratory tracts and kidneys. Although the aetiology of GPA remains largely unknown, it is believed to be autoimmune in origin and triggered by environmental events on a background of genetic susceptibility.In Europe, the prevalence of GPA is five cases per 100,000 population, with greater incidence in Northern Europe. GPA can occur in all racial groups but predominantly affects Caucasians. Both sexes are affected equally. GPA affects a wide age range (age range, 8-99 years).Granulomatosis with polyangiitis is characterised by necrotising granulomatous lesions of the respiratory tract, vasculitis and glomerulonephritis. Classically, the acronym ELK is used to describe the clinical involvement of the ear, nose and throat (ENT); lungs; and kidneys. Because the upper respiratory tract is involved in 70-100% of cases of GPA, classic otorhinolaryngologic symptoms may be the first clinical manifestation of disease. The nasal cavity and the paranasal sinuses are the most common sites of involvement in the head and neck area (85-100%), whereas otological disease is found in approximately 35% (range, 19-61%) of cases.Diagnosis of GPA is achieved through clinical assessment, serological tests for anti-neutrophil cytoplasmic antibodies (ANCA) and histological analysis. The 10-year survival rate is estimated to be 40% when the kidneys are involved and 60-70% when there is no kidney involvement.The standard therapy for GPA is a combination of glucocorticoids and cyclophosphamide. In young patients, cyclophosphamide should be switched to azathioprine in the maintenance phase.A multidisciplinary approach, involving otorhinolaryngologists, oral and maxillofacial surgeons, oral physicians, rheumatologists, renal and respiratory physicians, and ophthalmologists, is necessary for the diagnosis and therapeutic treatment of GPA. ENT physicians have a determining role in recognising the early onset of the disease and starting an appropriate therapy.

The spectrum of Wegener's granulomatosis and disease relapse.