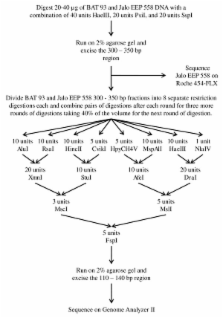 Next generation sequencing has significantly increased the speed at which single nucleotide polymorphisms (SNPs) can be discovered and subsequently used as molecular markers for research. Unfortunately, for species such as common bean ( Phaseolus vulgaris L.) which do not have a whole genome sequence available, the use of next generation sequencing for SNP discovery is much more difficult and costly. To this end we developed a method which couples sequences obtained from the Roche 454-FLX system (454) with the Illumina Genome Analyzer (GA) for high-throughput SNP discovery.

Using a multi-tier reduced representation library we discovered a total of 3,487 SNPs of which 2,795 contained sufficient flanking genomic sequence for SNP assay development. Using Sanger sequencing to determine the validation rate of these SNPs, we found that 86% are likely to be true SNPs. Furthermore, we designed a GoldenGate assay which contained 1,050 of the 3,487 predicted SNPs. A total of 827 of the 1,050 SNPs produced a working GoldenGate assay (79%).

Through combining two next generation sequencing techniques we have developed a method that allows high-throughput SNP discovery in any diploid organism without the need of a whole genome sequence or the creation of normalized cDNA libraries. The need to only perform one 454 run and one GA sequencer run allows high-throughput SNP discovery with sufficient sequence for assay development to be performed in organisms, such as common bean, which have limited genomic resources.

Development and implementation of high-throughput SNP genotyping in barley

Timothy Close,  Prasanna R. Bhat,  Stefano Lonardi … (2009)
Background High density genetic maps of plants have, nearly without exception, made use of marker datasets containing missing or questionable genotype calls derived from a variety of genic and non-genic or anonymous markers, and been presented as a single linear order of genetic loci for each linkage group. The consequences of missing or erroneous data include falsely separated markers, expansion of cM distances and incorrect marker order. These imperfections are amplified in consensus maps and problematic when fine resolution is critical including comparative genome analyses and map-based cloning. Here we provide a new paradigm, a high-density consensus genetic map of barley based only on complete and error-free datasets and genic markers, represented accurately by graphs and approximately by a best-fit linear order, and supported by a readily available SNP genotyping resource. Results Approximately 22,000 SNPs were identified from barley ESTs and sequenced amplicons; 4,596 of them were tested for performance in three pilot phase Illumina GoldenGate assays. Data from three barley doubled haploid mapping populations supported the production of an initial consensus map. Over 200 germplasm selections, principally European and US breeding material, were used to estimate minor allele frequency (MAF) for each SNP. We selected 3,072 of these tested SNPs based on technical performance, map location, MAF and biological interest to fill two 1536-SNP "production" assays (BOPA1 and BOPA2), which were made available to the barley genetics community. Data were added using BOPA1 from a fourth mapping population to yield a consensus map containing 2,943 SNP loci in 975 marker bins covering a genetic distance of 1099 cM. Conclusion The unprecedented density of genic markers and marker bins enabled a high resolution comparison of the genomes of barley and rice. Low recombination in pericentric regions is evident from bins containing many more than the average number of markers, meaning that a large number of genes are recombinationally locked into the genetic centromeric regions of several barley chromosomes. Examination of US breeding germplasm illustrated the usefulness of BOPA1 and BOPA2 in that they provide excellent marker density and sensitivity for detection of minor alleles in this genetically narrow material.

Evandro Novaes,  Derek Drost,  William Farmerie … (2008)
Background Benefits from high-throughput sequencing using 454 pyrosequencing technology may be most apparent for species with high societal or economic value but few genomic resources. Rapid means of gene sequence and SNP discovery using this novel sequencing technology provide a set of baseline tools for genome-level research. However, it is questionable how effective the sequencing of large numbers of short reads for species with essentially no prior gene sequence information will support contig assemblies and sequence annotation. Results With the purpose of generating the first broad survey of gene sequences in Eucalyptus grandis, the most widely planted hardwood tree species, we used 454 technology to sequence and assemble 148 Mbp of expressed sequences (EST). EST sequences were generated from a normalized cDNA pool comprised of multiple tissues and genotypes, promoting discovery of homologues to almost half of Arabidopsis genes, and a comprehensive survey of allelic variation in the transcriptome. By aligning the sequencing reads from multiple genotypes we detected 23,742 SNPs, 83% of which were validated in a sample. Genome-wide nucleotide diversity was estimated for 2,392 contigs using a modified theta (θ) parameter, adapted for measuring genetic diversity from polymorphisms detected by randomly sequencing a multi-genotype cDNA pool. Diversity estimates in non-synonymous nucleotides were on average 4x smaller than in synonymous, suggesting purifying selection. Non-synonymous to synonymous substitutions (Ka/Ks) among 2,001 contigs averaged 0.30 and was skewed to the right, further supporting that most genes are under purifying selection. Comparison of these estimates among contigs identified major functional classes of genes under purifying and diversifying selection in agreement with previous researches. Conclusion In providing an abundance of foundational transcript sequences where limited prior genomic information existed, this work created part of the foundation for the annotation of the E. grandis genome that is being sequenced by the US Department of Energy. In addition we demonstrated that SNPs sampled in large-scale with 454 pyrosequencing can be used to detect evolutionary signatures among genes, providing one of the first genome-wide assessments of nucleotide diversity and Ka/Ks for a non-model plant species.