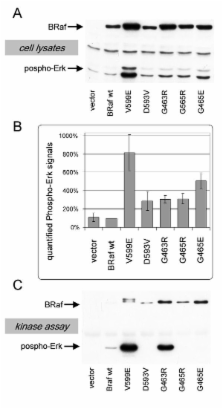 Genes of the Raf family encode kinases that are regulated by Ras and mediate cellular responses to growth signals. Recently, it was shown that activating mutations of BRaf are found with high frequency in human melanomas. The Ras family member most often mutated in melanoma is NRas.

The constitutive activation of the Ras/Raf signaling pathway suggests an impact on the clinical course of the tumor. To address this notion, we analyzed tumor DNA from 114 primary cutaneous melanomas and of 86 metastatic lesions obtained from 174 patients for mutations in BRaf (exons 15 and 11) and NRas (exons 1 and 2) by direct sequencing of PCR products and correlated these results with the clinical course.

In 57.5% of the tumors either BRaf or NRas were mutated with a higher incidence in metastatic (66.3%) than in primary lesions (50.9%). Although the majority of BRaf mutations affected codon 599, almost 15% of mutations at this position were different from the well-described exchange from valine to glutamic acid. These mutations (V599R and V599K) also displayed increased kinase and transforming activity. Surprisingly, the additional BRaf variants D593V, G465R and G465E showed a complete loss of activity in the in vitro kinase assay; however, cells overexpressing these mutants displayed increased Erk phosphorylation. The correlation of mutational status and clinical course revealed that the presence of BRaf/NRas mutations in primary tumors did not negatively impact progression free or overall survival. In contrast, however, for metastatic lesions the presence of BRAF/NRAS mutations was associated with a significantly poorer prognosis, i.e. a shortened survival.

We demonstrate a high – albeit lower than initially anticipated – frequency of activating BRaf mutations in melanoma in the largest series of directly analyzed tumors reported to date. Notably, the clinical course of patients harboring activating BRaf mutations in metastatic melanoma was significantly affected by the presence of a constitutive BRaf activation in these.

Mutations of the BRAF gene in human cancer.

Catherine Mould,  Sarah Hall,  Jon Teague … (2002)
Cancers arise owing to the accumulation of mutations in critical genes that alter normal programmes of cell proliferation, differentiation and death. As the first stage of a systematic genome-wide screen for these genes, we have prioritized for analysis signalling pathways in which at least one gene is mutated in human cancer. The RAS RAF MEK ERK MAP kinase pathway mediates cellular responses to growth signals. RAS is mutated to an oncogenic form in about 15% of human cancer. The three RAF genes code for cytoplasmic serine/threonine kinases that are regulated by binding RAS. Here we report BRAF somatic missense mutations in 66% of malignant melanomas and at lower frequency in a wide range of human cancers. All mutations are within the kinase domain, with a single substitution (V599E) accounting for 80%. Mutated BRAF proteins have elevated kinase activity and are transforming in NIH3T3 cells. Furthermore, RAS function is not required for the growth of cancer cell lines with the V599E mutation. As BRAF is a serine/threonine kinase that is commonly activated by somatic point mutation in human cancer, it may provide new therapeutic opportunities in malignant melanoma.

Rosemary Akhurst,  A. Balmain,  R Derynck … (2001)
Epithelial and hematopoietic cells have a high turnover and their progenitor cells divide continuously, making them prime targets for genetic and epigenetic changes that lead to cell transformation and tumorigenesis. The consequent changes in cell behavior and responsiveness result not only from genetic alterations such as activation of oncogenes or inactivation of tumor suppressor genes, but also from altered production of, or responsiveness to, stimulatory or inhibitory growth and differentiation factors. Among these, transforming growth factor beta (TGF-beta) and its signaling effectors act as key determinants of carcinoma cell behavior. The autocrine and paracrine effects of TGF-beta on tumor cells and the tumor micro-environment exert both positive and negative influences on cancer development. Accordingly, the TGF-beta signaling pathway has been considered as both a tumor suppressor pathway and a promoter of tumor progression and invasion. Here we evaluate the role of TGF-beta in tumor development and attempt to reconcile the positive and negative effects of TGF-beta in carcinogenesis.

Kathryn Kirkwood,  M Atkins,  Daniel G. Coit … (2001)
The American Joint Committee on Cancer (AJCC) recently proposed major revisions of the tumor-node-metastases (TNM) categories and stage groupings for cutaneous melanoma. Thirteen cancer centers and cancer cooperative groups contributed staging and survival data from a total of 30,450 melanoma patients from their databases in order to validate this staging proposal. There were 17,600 melanoma patients with complete clinical, pathologic, and follow-up information. Factors predicting melanoma-specific survival rates were analyzed using the Cox proportional hazards regression model. Follow-up survival data for 5 years or longer were available for 73% of the patients. This analysis demonstrated that (1) in the T category, tumor thickness and ulceration were the most powerful predictors of survival, and the level of invasion had a significant impact only within the subgroup of thin (< or = 1 mm) melanomas; (2) in the N category, the following three independent factors were identified: the number of metastatic nodes, whether nodal metastases were clinically occult or clinically apparent, and the presence or absence of primary tumor ulceration; and (3) in the M category, nonvisceral metastases was associated with a better survival compared with visceral metastases. A marked diversity in the natural history of pathologic stage III melanoma was demonstrated by five-fold differences in 5-year survival rates for defined subgroups. This analysis also demonstrated that large and complex data sets could be used effectively to examine prognosis and survival outcome in melanoma patients. The results of this evidence-based methodology were incorporated into the AJCC melanoma staging as described in the companion publication.