Simple rules for passive diffusion through the nuclear pore complex 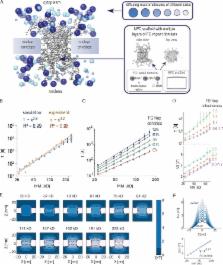 Passive macromolecular diffusion through nuclear pore complexes is thought to decrease dramatically beyond ∼40 kD. Using time-resolved fluorescence microscopy and Brownian dynamics simulations, Timney et al. show that this barrier is in fact much softer, decreasing along a continuum.

Passive macromolecular diffusion through nuclear pore complexes (NPCs) is thought to decrease dramatically beyond a 30–60-kD size threshold. Using thousands of independent time-resolved fluorescence microscopy measurements in vivo, we show that the NPC lacks such a firm size threshold; instead, it forms a soft barrier to passive diffusion that intensifies gradually with increasing molecular mass in both the wild-type and mutant strains with various subsets of phenylalanine-glycine (FG) domains and different levels of baseline passive permeability. Brownian dynamics simulations replicate these findings and indicate that the soft barrier results from the highly dynamic FG repeat domains and the diffusing macromolecules mutually constraining and competing for available volume in the interior of the NPC, setting up entropic repulsion forces. We found that FG domains with exceptionally high net charge and low hydropathy near the cytoplasmic end of the central channel contribute more strongly to obstruction of passive diffusion than to facilitated transport, revealing a compartmentalized functional arrangement within the NPC.

Mark Longtine,  Amos Mckenzie III,  Douglas J. DeMarini … (1998)
An important recent advance in the functional analysis of Saccharomyces cerevisiae genes is the development of the one-step PCR-mediated technique for deletion and modification of chromosomal genes. This method allows very rapid gene manipulations without requiring plasmid clones of the gene of interest. We describe here a new set of plasmids that serve as templates for the PCR synthesis of fragments that allow a variety of gene modifications. Using as selectable marker the S. cerevisiae TRP1 gene or modules containing the heterologous Schizosaccharomyces pombe his5+ or Escherichia coli kan(r) gene, these plasmids allow gene deletion, gene overexpression (using the regulatable GAL1 promoter), C- or N-terminal protein tagging [with GFP(S65T), GST, or the 3HA or 13Myc epitope], and partial N- or C-terminal deletions (with or without concomitant protein tagging). Because of the modular nature of the plasmids, they allow efficient and economical use of a small number of PCR primers for a wide variety of gene manipulations. Thus, these plasmids should further facilitate the rapid analysis of gene function in S. cerevisiae.

Functional organization of the yeast proteome by systematic analysis of protein complexes.

Giulio Superti-Furga,  Cristina-Maria Cruciat,  K. Klein … (2002)
Most cellular processes are carried out by multiprotein complexes. The identification and analysis of their components provides insight into how the ensemble of expressed proteins (proteome) is organized into functional units. We used tandem-affinity purification (TAP) and mass spectrometry in a large-scale approach to characterize multiprotein complexes in Saccharomyces cerevisiae. We processed 1,739 genes, including 1,143 human orthologues of relevance to human biology, and purified 589 protein assemblies. Bioinformatic analysis of these assemblies defined 232 distinct multiprotein complexes and proposed new cellular roles for 344 proteins, including 231 proteins with no previous functional annotation. Comparison of yeast and human complexes showed that conservation across species extends from single proteins to their molecular environment. Our analysis provides an outline of the eukaryotic proteome as a network of protein complexes at a level of organization beyond binary interactions. This higher-order map contains fundamental biological information and offers the context for a more reasoned and informed approach to drug discovery.

The Activated Complex in Chemical Reactions

B.L. Timney and B. Raveh contributed equally to this paper.