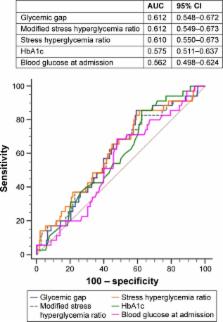 Acute hyperglycemia is a common finding in patients presenting to emergency departments (EDs) with acute exacerbation of chronic obstructive pulmonary disease (AECOPD). Several studies have argued against the association between hyperglycemia at admission and adverse outcomes in patients with diabetes and an acute illness. Recent studies have shown that glucose-related variables (eg, glycemic gaps and stress hyperglycemia ratios) that are adjusted for glycated hemoglobin levels can indicate the severity of a variety of diseases. The objective of this study was to assess whether these hemoglobin A1c (HbA1c)-based adjusted average glycemic variables were associated with unfavorable outcomes in patients admitted to a hospital with AECOPD. We found that 1) pulmonary infection is a major risk factor for AECOPD; 2) a higher glycemic gap and modified stress hyperglycemia ratio were associated with the development of acute respiratory failure (ARF) in patients with diabetes admitted to an ED because of AECOPD; and 3) the glycemic gap and modified stress hyperglycemia ratio had superior discriminative power over acute hyperglycemia and HbA1c for predicting the development of ARF, although the HbA1c-adjusted glycemic variables alone were not independent risk factors for ARF.

Taking glucocorticoids by prescription is associated with subsequent cardiovascular disease.

Vascular disease and diabetes: is hypoglycaemia an aggravating factor?

Rohana Wright,  Brian M. Frier (2015)
Acute hypoglycaemia provokes profound physiological changes affecting the cardiovascular system and several haematological parameters, principally as a consequence of sympatho-adrenal activation and counter-regulatory hormonal secretion. Many of these responses have an important role in protecting the brain from neuroglycopenia, through altering regional blood flow and promoting metabolic changes that will restore blood glucose to normal. In healthy young adults the cardiovascular effects are transient and have no obvious detrimental consequences. However, some of the effected changes are potentially pathophysiological and in people with diabetes who have developed endothelial dysfunction, they may have an adverse impact on a vasculature that is already damaged. The acute haemodynamic and haematological changes may increase the risk of localized tissue ischaemia, and major vascular events can certainly be precipitated by acute hypoglycaemia. These include myocardial and cerebral ischaemia and occasionally infarction. Established diabetic retinopathy often deteriorates after strict glycaemic control is instituted, the latter being associated with a threefold increase in frequency of severe hypoglycaemia, and enhanced exposure to mild hypoglycaemia. The possible mechanisms underlying these hypoglycaemia-induced effects include haemorrheological changes, white cell activation, vasoconstriction, and the release of inflammatory mediators and cytokines. The concept that acute hypoglycaemia could aggravate vascular complications associated with diabetes is discussed in relation to evolving comprehension of the pathogenesis of atherosclerosis and blood vessel disease.

B Bistrian,  A Malhotra,  K C McCowen (2000)
Stress hyperglycemia is common and likely to be associated with at least some of the same complications as hyperglycemia in true diabetes mellitus, such as poor wound healing and a higher infection rate. The predominant cause is the intense counterregulatory hormone and cytokine responses of critical illness, often compounded by excessive dextrose administration, usually as TPN. Although randomized data suggesting benefit of controlling hyperglycemia in hospitalized patients are paltry, prospective controlled trials are feasible and should be initiated. In the interim, the practice at the authors' institution is to use insulin to lower plasma glucose concentrations to a safe range of 150 mg/dL to 200 mg/dL in all patients.