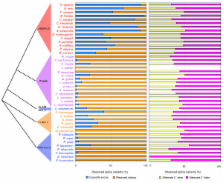 A comprehensive survey of alternate splicing across 42 eukaryotes so as to gain insight into how spliceosomal introns are recognized.

Variations in transcript splicing can reveal how eukaryotes recognize intronic splice sites. Retained introns (RIs) commonly appear when the intron definition (ID) mechanism of splice site recognition inconsistently identifies intron-exon boundaries, and cassette exons (CEs) are often caused by variable recognition of splice junctions by the exon definition (ED) mechanism. We have performed a comprehensive survey of alternative splicing across 42 eukaryotes to gain insight into how spliceosomal introns are recognized.

All eukaryotes we studied exhibit RIs, which appear more frequently than previously thought. CEs are also present in all kingdoms and most of the organisms in our analysis. We observe that the ratio of CEs to RIs varies substantially among kingdoms, while the ratio of competing 3' acceptor and competing 5' donor sites remains nearly constant. In addition, we find the ratio of CEs to RIs in each organism correlates with the length of its introns. In all 14 fungi we examined, as well as in most of the 9 protists, RIs far outnumber CEs. This differs from the trend seen in 13 multicellular animals, where CEs occur much more frequently than RIs. The six plants we analyzed exhibit intermediate proportions of CEs and RIs.

Our results suggest that most extant eukaryotes are capable of recognizing splice sites via both ID and ED, although ED is most common in multicellular animals and ID predominates in fungi and most protists.

Genome sequence of the nematode C. elegans: a platform for investigating biology.

James Mussell (1999)
The 97-megabase genomic sequence of the nematode Caenorhabditis elegans reveals over 19,000 genes. More than 40 percent of the predicted protein products find significant matches in other organisms. There is a variety of repeated sequences, both local and dispersed. The distinctive distribution of some repeats and highly conserved genes provides evidence for a regional organization of the chromosomes.

The genome sequence of the malaria mosquito Anopheles gambiae.

Anastasios Koutsos,  Michael Flanigan,  F. Unger … (2002)
Anopheles gambiae is the principal vector of malaria, a disease that afflicts more than 500 million people and causes more than 1 million deaths each year. Tenfold shotgun sequence coverage was obtained from the PEST strain of A. gambiae and assembled into scaffolds that span 278 million base pairs. A total of 91% of the genome was organized in 303 scaffolds; the largest scaffold was 23.1 million base pairs. There was substantial genetic variation within this strain, and the apparent existence of two haplotypes of approximately equal frequency ("dual haplotypes") in a substantial fraction of the genome likely reflects the outbred nature of the PEST strain. The sequence produced a conservative inference of more than 400,000 single-nucleotide polymorphisms that showed a markedly bimodal density distribution. Analysis of the genome sequence revealed strong evidence for about 14,000 protein-encoding transcripts. Prominent expansions in specific families of proteins likely involved in cell adhesion and immunity were noted. An expressed sequence tag analysis of genes regulated by blood feeding provided insights into the physiological adaptations of a hematophagous insect.

N. H. Putnam,  M Srivastava,  U Hellsten … (2007)
Sea anemones are seemingly primitive animals that, along with corals, jellyfish, and hydras, constitute the oldest eumetazoan phylum, the Cnidaria. Here, we report a comparative analysis of the draft genome of an emerging cnidarian model, the starlet sea anemone Nematostella vectensis. The sea anemone genome is complex, with a gene repertoire, exon-intron structure, and large-scale gene linkage more similar to vertebrates than to flies or nematodes, implying that the genome of the eumetazoan ancestor was similarly complex. Nearly one-fifth of the inferred genes of the ancestor are eumetazoan novelties, which are enriched for animal functions like cell signaling, adhesion, and synaptic transmission. Analysis of diverse pathways suggests that these gene "inventions" along the lineage leading to animals were likely already well integrated with preexisting eukaryotic genes in the eumetazoan progenitor.