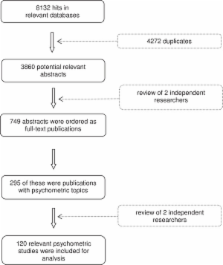 There are a number of instruments that describe severity and progression of multiple sclerosis and they are increasingly used as endpoints to assess the effectiveness of therapeutic interventions. We examined to what extent the psychometric properties of two accepted instruments – EDSS and MSFC – meet methodological standards and the value they have in clinical trials.

For evaluation of psychometric properties (validity, reliability, sensitivity of change) of EDSS and MSFC, 120 relevant full-text publications were identified, 54 of them assessed the EDSS, 26 the MSFC and 40 included both instruments. The EDSS has some documented weaknesses in reliability and sensitivity to change. The main limitations of the MSFC are learning effects and the z-scores method used to calculate the total score. However, the methodological criterion of validity applies sufficiently for both instruments.

For use in clinical studies, we found the EDSS to be preferred as a primary and secondary outcome measure in recent studies (50 EDSS, 9 MSFC).

Recognizing their strengths and weaknesses, both EDSS and MSFC are suitable to detect the effectiveness of clinical interventions and to monitor disease progression. Almost all publications identify the EDSS as the most widely used tool to measure disease outcomes in clinical trials. Despite some limitations, both instruments are accepted as endpoints and neither are discussed as surrogate parameters in identified publications. A great advantage of the EDSS is its international acceptance (e.g. by EMA) as a primary endpoint in clinical trials and its broad use in trials, enabling cross-study comparisons.

,  Kim Norris,  J Coles … (2008)
Alemtuzumab, a humanized monoclonal antibody that targets CD52 on lymphocytes and monocytes, may be an effective treatment for early multiple sclerosis. In this phase 2, randomized, blinded trial involving previously untreated, early, relapsing-remitting multiple sclerosis, we assigned 334 patients with scores of 3.0 or less on the Expanded Disability Status Scale and a disease duration of 3 years or less to receive either subcutaneous interferon beta-1a (at a dose of 44 microg) three times per week or annual intravenous cycles of alemtuzumab (at a dose of either 12 mg or 24 mg per day) for 36 months. In September 2005, alemtuzumab therapy was suspended after immune thrombocytopenic purpura developed in three patients, one of whom died. Treatment with interferon beta-1a continued throughout the study. Alemtuzumab significantly reduced the rate of sustained accumulation of disability, as compared with interferon beta-1a (9.0% vs. 26.2%; hazard ratio, 0.29; 95% confidence interval [CI], 0.16 to 0.54; P<0.001) and the annualized rate of relapse (0.10 vs. 0.36; hazard ratio, 0.26; 95% CI, 0.16 to 0.41; P<0.001). The mean disability score on a 10-point scale improved by 0.39 point in the alemtuzumab group and worsened by 0.38 point in the interferon beta-1a group (P<0.001). In the alemtuzumab group, the lesion burden (as seen on T(2)-weighted magnetic resonance imaging) was reduced, as compared with that in the interferon beta-1a group (P=0.005). From month 12 to month 36, brain volume (as seen on T(1)-weighted magnetic resonance imaging) increased in the alemtuzumab group but decreased in the interferon beta-1a group (P=0.02). Adverse events in the alemtuzumab group, as compared with the interferon beta-1a group, included autoimmunity (thyroid disorders [23% vs. 3%] and immune thrombocytopenic purpura [3% vs. 1%]) and infections (66% vs. 47%). There were no significant differences in outcomes between the 12-mg dose and the 24-mg dose of alemtuzumab. In patients with early, relapsing-remitting multiple sclerosis, alemtuzumab was more effective than interferon beta-1a but was associated with autoimmunity, most seriously manifesting as immune thrombocytopenic purpura. The study was not powered to identify uncommon adverse events. (ClinicalTrials.gov number, NCT00050778.) 2008 Massachusetts Medical Society

(1993)
We report a multicenter, randomized, double-blind, placebo-controlled trial of interferon beta-1b (IFNB) in 372 ambulatory patients with relapsing-remitting multiple sclerosis (MS). Entry criteria included an Expanded Disability Status Scale (EDSS) score of 0 to 5.5 and at least two exacerbations in the previous 2 years. One-third of the patients received placebo, one-third 1.6 million international units (MIU) of IFNB, and one-third 8 MIU of IFNB, self-administered by subcutaneous injections every other day. The primary end points were differences in exacerbation rates and proportion of patients remaining exacerbation-free. The annual exacerbation rate for patients receiving placebo was 1.27; for 1.6 MIU IFNB, 1.17; and for 8 MIU IFNB, 0.84 after 2 years. Exacerbation rates were significantly lower in both treatment groups compared with the placebo group (8 MIU versus placebo, p = 0.0001; 1.6 MIU versus placebo, p = 0.0101; and 8 MIU versus 1.6 MIU, p = 0.0086), suggesting a dosage effect. The reduction in exacerbation severity in the 8 MIU group was attributable to a twofold reduction in the frequency of moderate and severe attacks. More patients in the 8 MIU group (n = 36) were exacerbation-free at 2 years compared with the placebo group (n = 18; p = 0.007). EDSS scores changed little from baseline in both the placebo and treatment arms. Accordingly, a significant change in disability could not be discerned in this trial. Finally, in serial MRIs, MS activity was significantly less in the high-dose IFNB group.(ABSTRACT TRUNCATED AT 250 WORDS)

I B Schiffer,  D Rose,  J. Goldstein … (1995)
We studied copolymer 1 (Copaxone) in a multicenter (11-university) phase III trial of patients with relapsing-remitting multiple sclerosis (MS). Two hundred fifty-one patients were randomized to receive copolymer 1 (n = 125) or placebo (n = 126) at a dosage of 20 mg by daily subcutaneous injection for 2 years. The primary end point was a difference in the MS relapse rate. The final 2-year relapse rate was 1.19 +/- 0.13 for patients receiving copolymer 1 and 1.68 +/- 0.13 for those receiving placebo, a 29% reduction in favor of copolymer 1 (p = 0.007) (annualized rates = 0.59 for copolymer 1 and 0.84 for placebo). Trends in the proportion of relapse-free patients and median time to first relapse favored copolymer 1. Disability was measured by the Expanded Disability Status Scale (EDSS), using a two-neurologist (examining and treating) protocol. When the proportion of patients who improved, were unchanged, or worsened by > or = 1 EDSS step from baseline to conclusion (2 years) was evaluated, significantly more patients receiving copolymer 1 were found to have improved and more receiving placebo worsened (p = 0.037). Patient withdrawals were 19 (15.2%) from the copolymer 1 group and 17 (13.5%) from the placebo group at approximately the same intervals. The treatment was well tolerated. The most common adverse experience was an injection-site reaction. Rarely, a transient self-limited systemic reaction followed the injection in 15.2% of those receiving copolymer 1 and 3.2% of those receiving placebo.(ABSTRACT TRUNCATED AT 250 WORDS)