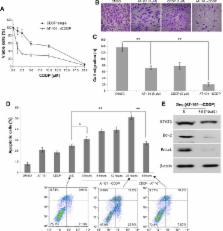 AT-101, known as R-(–)-gossypol, is a potent anticancer agent, but its chemosensitizing effects remain elusive. The present study aimed to examine whether AT-101 could increase the sensitivity of non-small cell lung cancer A549 cells to cisplatin (CDDP) and the underlying mechanisms. We evaluated the efficacy of the sequential treatment with AT-101 and CDDP using both in vitro and in vivo models. Our results showed that as compared to AT-101 or CDDP monotherapy, or AT-101 plus CDDP concurrent treatment, the sequential treatment significantly inhibited cell proliferation and migration and induced tumor cell death. Moreover, the efficacy of the sequential treatment was also confirmed in a mouse A549 xenograft model. Our study revealed that AT-101 inhibited the reduced status of apurinic/apyrimidinic endonuclease 1 (APE1) and attenuated APE1-mediated IL-6/STAT3 signaling activation by decreasing IL-6 protein expression; suppressing the STAT3–DNA binding; and reducing the expression of the downstream antiapoptotic proteins Bcl-2 and Bcl-xL. In conclusion, AT-101 enhances the sensitivity of A549 cells to CDDP in vitro and in vivo through the inhibition of APE1-mediated IL-6/STAT3 signaling activation, providing a rationale for the combined use of AT-101 and CDDP in non-small cell lung cancer chemotherapy.

Michael Lee,  Albert S. Ye,  Alexandra K. Gardino … (2012)
Crosstalk and complexity within signaling pathways and their perturbation by oncogenes limit component-by-component approaches to understanding human disease. Network analysis of how normal and oncogenic signaling can be rewired by drugs may provide opportunities to target tumors with high specificity and efficacy. Using targeted inhibition of oncogenic signaling pathways, combined with DNA-damaging chemotherapy, we report that time-staggered EGFR inhibition, but not simultaneous coadministration, dramatically sensitizes a subset of triple-negative breast cancer cells to genotoxic drugs. Systems-level analysis-using high-density time-dependent measurements of signaling networks, gene expression profiles, and cell phenotypic responses in combination with mathematical modeling-revealed an approach for altering the intrinsic state of the cell through dynamic rewiring of oncogenic signaling pathways. This process converts these cells to a less tumorigenic state that is more susceptible to DNA damage-induced cell death by reactivation of an extrinsic apoptotic pathway whose function is suppressed in the oncogene-addicted state. Copyright © 2012 Elsevier Inc. All rights reserved.

Targeting the STAT3 signaling pathway in cancer: role of synthetic and natural inhibitors.

Anupam Bishayee,  Kodappully Siveen,  Sakshi Sikka … (2014)
Signal transducers and activators of transcription (STATs) comprise a family of cytoplasmic transcription factors that mediate intracellular signaling that is usually generated at cell surface receptors and thereby transmit it to the nucleus. Numerous studies have demonstrated constitutive activation of STAT3 in a wide variety of human tumors, including hematological malignancies (leukemias, lymphomas, and multiple myeloma) as well as diverse solid tumors (such as head and neck, breast, lung, gastric, hepatocellular, colorectal and prostate cancers). There is strong evidence to suggest that aberrant STAT3 signaling promotes initiation and progression of human cancers by either inhibiting apoptosis or inducing cell proliferation, angiogenesis, invasion, and metastasis. Suppression of STAT3 activation results in the induction of apoptosis in tumor cells, and accordingly its pharmacological modulation by tyrosine kinase inhibitors, antisense oligonucleotides, decoy nucleotides, dominant negative proteins, RNA interference and chemopreventive agents have been employed to suppress the proliferation of various human cancer cells in culture and tumorigenicity in vivo. However, the identification and development of novel drugs that can target deregulated STAT3 activation effectively remains an important scientific and clinical challenge. This review presents the evidence for critical roles of STAT3 in oncogenesis and discusses the potential for development of novel cancer therapies based on mechanistic understanding of STAT3 signaling cascade. Copyright © 2013 Elsevier B.V. All rights reserved.

Corinne S. Martin,  Alicia Hamilton,  Arn J. Schilder (2008)
Although platinum chemotherapeutic agents such as carboplatin, cisplatin, and oxaliplatin are used to treat a broad range of malignant diseases, their efficacy in most cancers is limited by the development of resistance. There are multiple factors that contribute to platinum resistance but alterations of DNA repair processes have been known for some time to be important in mediating resistance. Recently acquired knowledge has provided insight into the molecular mechanisms of DNA repair pathways and their effect on response to chemotherapy. This review will discuss the most important DNA repair pathways known to be involved in the platinum response, i.e., nucleotide excision repair (NER) and mismatch repair (MMR), and will briefly touch on the role of BRCA in DNA repair. The therapeutic implications of alterations in DNA repair which affect response to platinum in the treatment of patients with malignant disease, such as excision repair cross-complementation group 1 (ERCC1) deficiency and mismatch repair deficiency, will be reviewed.