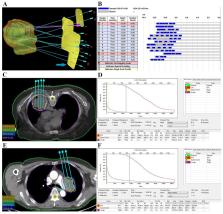 Non-small cell lung cancer (NSCLC) has become the most common cancer type and the leading cause of cancer-associated mortality worldwide. The aim of the present retrospective study was to evaluate the efficacy and safety of computed tomography (CT)-guided 125I brachytherapy alone in elderly patients with NSCLC. A total of 26 elderly patients with NSCLC stage I–III who had an inoperable lesion or progressive disease following radio-chemotherapy were treated with CT-guided 125I seed implantation for lung lesions and included in the present study. The prescribed dose of 125I brachytherapy was 80–140 Gy, and dosimetric verification was performed immediately after the procedure. The response rate (RR) and local control rate (LCR) were analyzed according to the Response Evaluation Criteria in Solid Tumors (version 1.1). Survival was estimated using the Kaplan-Meier method. Safety and complications were also documented. All patients were aged 65–85 years (median age, 77 years) and successfully completed the procedure, and the median follow-up time was 9.4 months (range, 3–31 months). After a 6-month follow-up, for pulmonary lesions, complete response (CR) was achieved in 11 (42.3%) cases, partial response in 9 (34.6%) cases, stable disease in 4 (15.4%) cases and progressive disease in 2 (7.7%) cases. The 6-month RR and LCR were 76.9 (20/26) and 92.3% (24/26), respectively. The mean overall survival (OS) time was 11.7±7.6 months and the 0.5- and 1-year OS rates were 90.1 and 73.3%, respectively. Tumor-related symptoms in patients were significantly alleviated following the procedure. No severe complications occurred during and after the procedure of 125I seed implantation. In conclusion, CT-guided 125I brachytherapy is a feasible, effective and safe therapy and may be considered as an alternative option to surgery and radiotherapy for elderly patients with NSCLC.

Jianbin Li,  Jinming Yu,  Ruimei Ren … (2007)
Radiation dose escalation is limited by the high incidence of pulmonary and esophageal toxicity, leading to calls for the omission of elective nodal irradiation (ENI) and the willingness to use involved-field irradiation (IFI) in patients with nonsmall cell lung cancer (NSCLC). A total of 200 eligible patients with inoperable stage III NSCLC were treated with concurrent chemoradiotherapy and randomized into either an IFI or ENI arm. A total of 4 to 6 cycles of cisplatin-based chemotherapy were delivered, and concurrent radiotherapy was started after the second cycle of chemotherapy. Three-dimensional conformal radiotherapy was delivered in once-daily fractions of 1.8 to 2 Gy to 68 to 74 Gy for IFI or 60 to 64 Gy for ENI. Patients in the IFI arm achieved better overall response rate (90% vs. 79%, P = 0.032) and better 5-years local control rate (51% vs.36%, P = 0.032) than those in the ENI arm. The radiation pneumonitis rate in patients with IFI was lower than in patients with ENI (17% vs. 29%, P = 0.044), and similar trends appeared in the radiation esophagitis, myelosuppression, and radiation pericarditis between 2 study arms, although not significantly. The 1-, 2-, and 5-year survival rates were 60.4%, 25.6%, and 18.3% for the ENI arm and 69.9%, 39.4%, and 25.1% for the IFI arm, respectively. Only the 2-year survival rates were statistically significant (P = 0.048). IFI arm achieved better overall response and local control than ENI arm, and it allowed a dose of 68 to 74 Gy to be safely administered to patients with inoperable stage III NSCLC. Outcome improvement can be expected by conformal IFI combined with chemotherapy for stage III NSCLC.

Results of a phase I dose-escalation study using three-dimensional conformal radiotherapy in the treatment of inoperable nonsmall cell lung carcinoma.

Ted C. Ling,  S A Leibel,  Valerie Rusch … (2005)
The objective of this study was to report the results of a Phase I dose-escalation study using three-dimensional conformal radiation therapy (3D-CRT) for the treatment of patients with nonsmall cell lung carcinoma (NSCLC). Between 1991 and 2003, 104 patients were enrolled for 3D-CRT at Memorial Sloan-Kettering Cancer Center. The median patient age was 69 years. Twenty-eight percent of patients had Stage I-II NSCLC, 33% of patients had Stage IIIA NSCLC, 32% of patients had Stage IIIB NSCLC, and 6% of patients had recurrent NSCLC. Induction chemotherapy was received by 16% of patients. Radiation was delivered in daily fractions of 1.8 grays (Gy) for doses or = 80.0 Gy. The MTD of 3D-CRT for NSCLC with an NTCP constraint of 25% was 84.0 Gy in the current study. There was a suggestion of improved survival in patients who received 80.0 Gy.

Simple Factors Associated With Radiation-Induced Lung Toxicity After Stereotactic Body Radiation Therapy of the Thorax: A Pooled Analysis of 88 Studies.