A new species of the genus Hyalella (Crustacea, Amphipoda) from northern Mexico 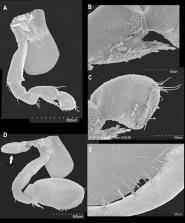 A new species, Hyalella tepehuana sp. nov., is described from Durango state, Mexico, a region where studies on Hyalella have been few. This species differs from most species of the North and South American genus Hyalella in the number of setae on the inner plate of maxilla 1 and maxilla 2, characters it shares with Hyalella faxoni Stebbing, 1903. Nevertheless, H. faxoni , from the Volcan Barva in Costa Rica, lacks a dorsal process on pereionites 1 and 2. Also, this new species differs from other described Hyalella species in Mexico by the shape of the palp on maxilla 1, the number of setae on the uropods, and the shape of the telson.

Diversity and arrangement of the cuticular structures of Hyalella (Crustacea: Amphipoda: Dogielinotidae) and their use in taxonomy

Adriane Zimmer,  Paula Araujo,  Georgina Bond-Buckup (2009)
This study describes the morphology and arrangement of the cuticular structures of Hyalella castroi González, Bond-Buckup & Araujo, 2006 and Hyalella pleoacuta González, Bond-Buckup & Araujo, 2006, to identify specific characters that can be used in taxonomstudies of this genus. The entire cuticular surface of both species was examined by optical and scanning electron microscopy. The data obtained were compared with available information for other members of Peracarida, mainly Amphipoda and Isopoda. Five different types of cuticular structures, including 30 types of setae, four types of microtrichs, three types of pores, and some structures formed by setules and denticles were identified. The results were compared with other groups of gammarids, and peracarideans, such as Thermosbaenacea and Isopoda. The use of cuticular structures as a tool for taxonomic studies showed important results, not only at species level, but also at genus, and family levels.