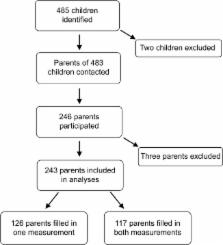 Pain is one of the most frequent and burdensome symptoms for children with cancer. Psychological acceptance has been shown to be beneficial in chronic pain. Acceptance-based interventions for experimentally induced pain have been shown to predict increased pain tolerance and decreased pain intensity. An acceptance-based pilot study for children with cancer experiencing pain has shown promising results. Further, parental acceptance has been shown to predict decreased child distress. To date, no instruments measuring acceptance in the context of acute pain in children are available. The aim of this study was to develop and evaluate an instrument to measure acceptance in parents of children experiencing pain during cancer treatment.

A test version of the Pain Flexibility Scale for Parents (PFS-P) was sent to parents of all children undergoing cancer treatment in Sweden at the time of the study. Exploratory factor analysis (n=243) examined numerous solutions. Internal consistency, test–retest reliability and convergent validity were calculated.

A three-factor Promax solution best represented the data. The subscales were pain resistance, valued action and pain fusion. Internal consistency was good ( α=0.81–0.93), and the total scale and the subscales demonstrated temporal stability ( r=0.76–0.87) and good convergent validity (−0.40 to −0.84).

The PFS-P measuring acceptance in parents of children experiencing pain during cancer treatment is now available, enabling evaluation of acceptance in the context of acute pain in children. The scale shows good psychometric properties but needs further validation.

Brain mechanisms supporting the modulation of pain by mindfulness meditation.

F Zeidán-Chuliá,  Robert A. Kraft,  Katherine Martucci … (2011)
The subjective experience of one's environment is constructed by interactions among sensory, cognitive, and affective processes. For centuries, meditation has been thought to influence such processes by enabling a nonevaluative representation of sensory events. To better understand how meditation influences the sensory experience, we used arterial spin labeling functional magnetic resonance imaging to assess the neural mechanisms by which mindfulness meditation influences pain in healthy human participants. After 4 d of mindfulness meditation training, meditating in the presence of noxious stimulation significantly reduced pain unpleasantness by 57% and pain intensity ratings by 40% when compared to rest. A two-factor repeated-measures ANOVA was used to identify interactions between meditation and pain-related brain activation. Meditation reduced pain-related activation of the contralateral primary somatosensory cortex. Multiple regression analysis was used to identify brain regions associated with individual differences in the magnitude of meditation-related pain reductions. Meditation-induced reductions in pain intensity ratings were associated with increased activity in the anterior cingulate cortex and anterior insula, areas involved in the cognitive regulation of nociceptive processing. Reductions in pain unpleasantness ratings were associated with orbitofrontal cortex activation, an area implicated in reframing the contextual evaluation of sensory events. Moreover, reductions in pain unpleasantness also were associated with thalamic deactivation, which may reflect a limbic gating mechanism involved in modifying interactions between afferent input and executive-order brain areas. Together, these data indicate that meditation engages multiple brain mechanisms that alter the construction of the subjectively available pain experience from afferent information.

Alan Kazdin,  Matthew Nock (2003)
Mechanisms of therapeutic change are rarely studied in child and adolescent therapy. Our central thesis is that the study of mechanisms of treatment is an excellent investment for improving clinical practice and patient care. Indeed, extending treatment trials to clinical settings, without complementary research that studies why and how treatment works, could have great limitations. In this article, we discuss the importance of studying mechanisms, the logical and methodological requirements, and why almost no studies to date provide evidence for why or how treatment works. Standard statistical practices (tests of mediation) and designs (randomized controlled clinical trials) contribute greatly to outcome research but have little to say about mechanisms given the way they are commonly used. The article ends with recommendations to guide research on mechanisms of therapeutic change.