A comprehensive map of the toll-like receptor signaling network 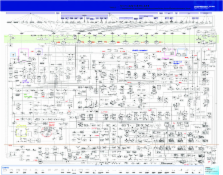 Recognition of pathogen-associated molecular signatures is critically important in proper activation of the immune system. The toll-like receptor (TLR) signaling network is responsible for innate immune response. In mammalians, there are 11 TLRs that recognize a variety of ligands from pathogens to trigger immunological responses. In this paper, we present a comprehensive map of TLRs and interleukin 1 receptor signaling networks based on papers published so far. The map illustrates the possible existence of a main network subsystem that has a bow-tie structure in which myeloid differentiation primary response gene 88 (MyD88) is a nonredundant core element, two collateral subsystems with small GTPase and phosphatidylinositol signaling, and MyD88-independent pathway. There is extensive crosstalk between the main bow-tie network and subsystems, as well as feedback and feedforward controls. One obvious feature of this network is the fragility against removal of the nonredundant core element, which is MyD88, and involvement of collateral subsystems for generating different reactions and gene expressions for different stimuli.

Missing pieces in the NF-kappaB puzzle.

Sankar Kumar Ghosh,  Michael Karin (2002)
The regulation of the transcription factor NF-kappaB activity occurs at several levels including controlled cytoplasmic-nuclear shuttling and modulation of its transcriptional activity. A critical component in NF-kappaB regulation is the IkappaB kinase (IKK) complex. This review is focused on recent progress as well as unanswered questions regarding the regulation and function of NF-kappaB and IKK.