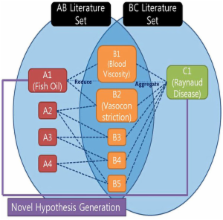 The Swanson's ABC model is powerful to infer hidden relationships buried in biological literature. However, the model is inadequate to infer relations with context information. In addition, the model generates a very large amount of candidates from biological text, and it is a semi-automatic, labor-intensive technique requiring human expert's manual input. To tackle these problems, we incorporate context terms to infer relations between AB interactions and BC interactions.

We propose 3 steps to discover meaningful hidden relationships between drugs and diseases: 1) multi-level (gene, drug, disease, symptom) entity recognition, 2) interaction extraction (drug-gene, gene-disease) from literature, 3) context vector based similarity score calculation. Subsequently, we evaluate our hypothesis with the datasets of the "Alzheimer's disease" related 77,711 PubMed abstracts. As golden standards, PharmGKB and CTD databases are used. Evaluation is conducted in 2 ways: first, comparing precision of the proposed method and the previous method and second, analysing top 10 ranked results to examine whether highly ranked interactions are truly meaningful or not.

Paula L. McClean,  Vadivel Parthsarathy,  Emilie Faivre … (2011)
Type 2 diabetes is a risk factor for Alzheimer's disease, most likely linked to an impairment of insulin signaling in the brain. The incretin hormone glucagon-like peptide-1 (GLP-1) facilitates insulin signaling, and novel long-lasting GLP-1 analogs, such as liraglutide, are on the market as diabetes therapeutics. GLP-1 has been shown to have neuroprotective properties in vitro and in vivo. Here we tested the effects of peripherally injected liraglutide in an Alzheimer mouse model, APP(swe)/PS1(ΔE9) (APP/PS1). Liraglutide was shown to cross the blood-brain barrier in an acute study. Liraglutide was injected for 8 weeks at 25 nmol/kg body weight i.p. once daily in 7-month-old APP/PS1 and wild-type littermate controls. In APP/PS1 mice, liraglutide prevented memory impairments in object recognition and water maze tasks, and prevented synapse loss and deterioration of synaptic plasticity in the hippocampus, commonly observed in this model. Overall β-amyloid plaque count in the cortex and dense-core plaque numbers were reduced by 40-50%, while levels of soluble amyloid oligomers were reduced by 25%. The inflammation response as measured by activated microglia numbers was halved in liraglutide-treated APP/PS1 mice. Numbers of young neurons in the dentate gyrus were increased in APP/PS1 mice with treatment. Liraglutide treatment had little effect on littermate control mice, whose behavior was comparable to wild-type saline controls; however, synaptic plasticity was enhanced in the drug group. Our results show that liraglutide prevents key neurodegenerative developments found in Alzheimer's disease, suggesting that GLP-1 analogs represent a novel treatment strategy for Alzheimer's disease.

PharmGKB: the Pharmacogenetics Knowledge Base.

Rebekah Oliver,  Jeffrey T. Klein,  Micheal Hewett … (2002)
The Pharmacogenetics Knowledge Base (PharmGKB; http://www.pharmgkb.org/) contains genomic, phenotype and clinical information collected from ongoing pharmacogenetic studies. Tools to browse, query, download, submit, edit and process the information are available to registered research network members. A subset of the tools is publicly available. PharmGKB currently contains over 150 genes under study, 14 Coriell populations and a large ontology of pharmacogenetics concepts. The pharmacogenetic concepts and the experimental data are interconnected by a set of relations to form a knowledge base of information for pharmacogenetic researchers. The information in PharmGKB, and its associated tools for processing that information, are tailored for leading-edge pharmacogenetics research. The PharmGKB project was initiated in April 2000 and the first version of the knowledge base went online in February 2001.

Allan Peter Davis,  Benjamin L. King,  Susan Mockus … (2010)
The Comparative Toxicogenomics Database (CTD) is a public resource that promotes understanding about the interaction of environmental chemicals with gene products, and their effects on human health. Biocurators at CTD manually curate a triad of chemical–gene, chemical–disease and gene–disease relationships from the literature. These core data are then integrated to construct chemical–gene–disease networks and to predict many novel relationships using different types of associated data. Since 2009, we dramatically increased the content of CTD to 1.4 million chemical–gene–disease data points and added many features, statistical analyses and analytical tools, including GeneComps and ChemComps (to find comparable genes and chemicals that share toxicogenomic profiles), enriched Gene Ontology terms associated with chemicals, statistically ranked chemical–disease inferences, Venn diagram tools to discover overlapping and unique attributes of any set of chemicals, genes or disease, and enhanced gene pathway data content, among other features. Together, this wealth of expanded chemical–gene–disease data continues to help users generate testable hypotheses about the molecular mechanisms of environmental diseases. CTD is freely available at http://ctd.mdibl.org.