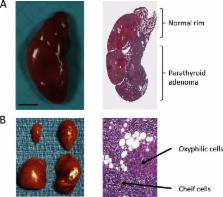 Sporadic multiglandular disease (MGD) has been reported in literature in 8–33 % of patients with primary hyperparathyroidism (pHPT). This paper aimed to review controversies in the pathogenesis and management of sporadic MGD.

A literature search and review was made to evaluate the level of evidence concerning diagnosis and management of sporadic MGD according to criteria proposed by Sackett, with recommendation grading by Heinrich et al. and Grading of Recommendations, Assessment, Development and Evaluation (GRADE) system. Results were discussed at the 6th Workshop of the European Society of Endocrine Surgeons entitled ‘Hyperparathyroidism due to multiple gland disease: An evidence-based perspective’.

Literature reports no prospective randomised studies; thus, a relatively low level of evidence was achieved. Appropriate surgical therapy of sporadic MGD should consist of a bilateral approach in most patients. Unilateral neck exploration guided by preoperative imaging should be reserved for selected patients, performed by an experienced endocrine surgeon and monitored by intraoperative parathormone assay (levels of evidence III–V, grade C recommendation). There is conflicting or equally weighted levels IV–V evidence supporting that cure rates can be similar or worse for sporadic MGD than for single adenomas (no recommendation). Best outcomes can be expected if surgery is performed by an experienced parathyroid surgeon working in a high-volume centre (grade C recommendation). Levels IV–V evidence supports that recurrent/persistence pHPT occurs more frequently in patients with double adenomas hence in situations where a double adenoma has been identified, the surgeon should have a high index of suspicion during surgery and postoperatively for the possibility of a four-gland disease (grade C recommendation).

Identifying preoperatively patients at risk for MGD remains challenging, intraoperative decisions are important for achieving acceptable cure rates and long-term follow-up is mandatory in such patients.

Rules of evidence and clinical recommendations on the use of antithrombotic agents.

Richard Jope (1999)
This review introduces the concepts that multiple actions of lithium are critical for its therapeutic effect, and that these complex effects stabilize neuronal activities, support neural plasticity, and provide neuroprotection. Three interacting systems appear most critical. (i) Modulation of neurotransmitters by lithium likely readjusts balances between excitatory and inhibitory activities, and decreased glutamatergic activity may contribute to neuroprotection. (ii) Lithium modulates signals impacting on the cytoskeleton, a dynamic system contributing to neural plasticity, at multiple levels, including glycogen synthase kinase-3beta, cyclic AMP-dependent kinase, and protein kinase C, which may be critical for the neural plasticity involved in mood recovery and stabilization. (iii) Lithium adjusts signaling activities regulating second messengers, transcription factors, and gene expression. The outcome of these effects appears likely to result in limiting the magnitudes of fluctuations in activities, contributing to a stabilizing influence induced by lithium, and neuroprotective effects may be derived from its modulation of gene expression.