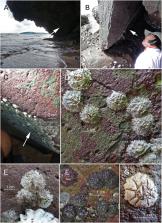 Octomeris is a chthamalid intertidal barnacle with eight shell plates. There are currently two species of such barnacles: O. brunnea Darwin, 1854 (type locality in the Philippines), common in the Indo-Pacific region, and O. angulosa Sowerby, 1825, only recorded in South Africa. Octomeris intermedia Nilsson-Cantell, 1921, identified from the Mergui Archipelago in Myanmar, was considered to be conspecific with O. brunnea by Hiro (1939) based on samples collected in Taiwan. The morphological differences in shell and opercular plates between O. brunnea and O. intermedia are believed to be intra-specific variations due to different degrees of shell erosion. In the present study, the genetic and morphological differentiations of Octomeris in the Indo-Pacific region were examined. This study found two molecular clades (with inter-specific differences) based on the divergence in the COI genes, and the species also have distinct geographical distributions. The Octomeris brunnea clade covers samples collected from the Philippines and Taiwan waters and the other clade, which we argue is O. intermedia , is distributed in Phuket and Krabi, Thailand and Langkawi, Malaysia. Phuket and Krabi are located approximately 300 km south of the Mergui Archipelago, the type locality of O. intermedia . The morphology of samples collected from Thailand fits the type description of O. intermedia in Nilsson-Cantell (1921). Our study concludes that O. intermedia is a valid species based on morphological and molecular evidence.

Phylogeography of the trumpetfishes (Aulostomus): ring species complex on a global scale.

G. Robertson,  Andréa Rocha,  Danielle A Bass … (2001)
The distribution of circumtropical marine species is limited by continental boundaries, cold temperate conditions, and oceanic expanses, but some of these barriers are permeable over evolutionary time scales. Sister taxa that evolved in separate ocean basins can come back into contact, and the consequences of this renewed sympatry may be a key to understanding evolutionary processes in marine organisms. The circumtropical trumpetfishes (Aulostomus) include a West Atlantic species (A. maculatus), an Indian-Pacific species (A. chinensis), and an East Atlantic species (A. strigosus) that may be the product of a recent invasion from the Indian Ocean. To resolve patterns of divergence and speciation, we surveyed 480 bp of mitochondrial DNA cytochrome b in 196 individuals from 16 locations. Based on a conventional molecular clock of 2% sequence divergence per million years, the deepest partitions in a neighbor-joining tree (d = 0.063-0.082) are consistent with separation of West Atlantic and Indian-Pacific species by the Isthmus of Panama, 3-4 million years ago. By the same criteria, trumpetfish in the East Atlantic were isolated from the Indian Ocean about 2.5 million years ago (d = 0.044-0.054), coincident with the advent of glacial cycles and cold-water upwelling around South Africa. Continental barriers between tropical oceans have only rarely been surmounted by trumpetfishes, but oceanic barriers do not appear to be substantial, as indicated by weak population partitioning (phiST = 0.093) in A. chinensis across the Indian and Pacific Oceans. Finally, morphological and mitochondrial DNA data indicate hybridization of A. strigosus and A. maculatus in Brazil. After 3-4 million years and a globe-spanning series of vicariant and dispersal events, trumpetfish lineages have come back into contact in the southwest Atlantic and appear to be merging. This ring species phenomenon may occur in a broad array of marine organisms, with clear implications for the production and maintenance of biodiversity in marine ecosystems.

John P. Wares,  M Pankey,  Fabio Pitombo … (2009)
Background We present a multi-locus phylogenetic analysis of the shallow water (high intertidal) barnacle genus Chthamalus, focusing on member species in the western hemisphere. Understanding the phylogeny of this group improves interpretation of classical ecological work on competition, distributional changes associated with climate change, and the morphological evolution of complex cirripede phenotypes. Methodology and Findings We use traditional and Bayesian phylogenetic and ‘deep coalescent’ approaches to identify a phylogeny that supports the monophyly of the mostly American ‘fissus group’ of Chthamalus, but that also supports a need for taxonomic revision of Chthamalus and Microeuraphia. Two deep phylogeographic breaks were also found within the range of two tropical American taxa (C. angustitergum and C. southwardorum) as well. Conclusions Our data, which include two novel gene regions for phylogenetic analysis of cirripedes, suggest that much more evaluation of the morphological evolutionary history and taxonomy of Chthamalid barnacles is necessary. These data and associated analyses also indicate that the radiation of species in the late Pliocene and Pleistocene was very rapid, and may provide new insights toward speciation via transient allopatry or ecological barriers.