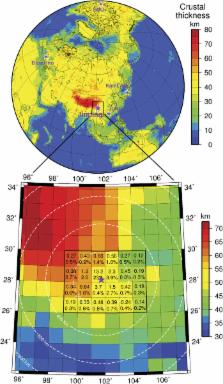 The Earth’s engine is driven by unknown proportions of primordial energy and heat produced in radioactive decay. Unfortunately, competing models of Earth’s composition reveal an order of magnitude uncertainty in the amount of radiogenic power driving mantle dynamics. Recent measurements of the Earth’s flux of geoneutrinos, electron antineutrinos from terrestrial natural radioactivity, reveal the amount of uranium and thorium in the Earth and set limits on the residual proportion of primordial energy. Comparison of the flux measured at large underground neutrino experiments with geologically informed predictions of geoneutrino emission from the crust provide the critical test needed to define the mantle’s radiogenic power. Measurement at an oceanic location, distant from nuclear reactors and continental crust, would best reveal the mantle flux, however, no such experiment is anticipated. We predict the geoneutrino flux at the site of the Jinping Neutrino Experiment (Sichuan, China). Within 8 years, the combination of existing data and measurements from soon to come experiments, including Jinping, will exclude end-member models at the 1σ level, define the mantle’s radiogenic contribution to the surface heat loss, set limits on the composition of the silicate Earth, and provide significant parameter bounds for models defining the mode of mantle convection.

M Boyet, R Carlson (2005)
New high-precision samarium-neodymium isotopic data for chondritic meteorites show that their 142Nd/144Nd ratio is 20 parts per million lower than that of most terrestrial rocks. This difference indicates that most (70 to 95%) of Earth's mantle is compositionally similar to the incompatible element-depleted source of mid-ocean ridge basalts, possibly as a result of a global differentiation 4.53 billion years ago (Ga), within 30 million years of Earth's formation. The complementary enriched reservoir has never been sampled and is probably located at the base of the mantle. These data influence models of Earth's compositional structure and require revision of the timing of global differentiation on Earth's Moon and Mars.

Detection of the Free Neutrino: a Confirmation.

Thermal and electrical conductivity of iron at Earth's core conditions

Monica Pozzo, Dario Alfè, Chris Davies … (2012)
The Earth acts as a gigantic heat engine driven by decay of radiogenic isotopes and slow cooling, which gives rise to plate tectonics, volcanoes, and mountain building. Another key product is the geomagnetic field, generated in the liquid iron core by a dynamo running on heat released by cooling and freezing to grow the solid inner core, and on chemical convection due to light elements expelled from the liquid on freezing. The power supplied to the geodynamo, measured by the heat-flux across the core-mantle boundary (CMB), places constraints on Earth's evolution. Estimates of CMB heat-flux depend on properties of iron mixtures under the extreme pressure and temperature conditions in the core, most critically on the thermal and electrical conductivities. These quantities remain poorly known because of inherent difficulties in experimentation and theory. Here we use density functional theory to compute these conductivities in liquid iron mixtures at core conditions from first principles- the first directly computed values that do not rely on estimates based on extrapolations. The mixtures of Fe, O, S, and Si are taken from earlier work and fit the seismologically-determined core density and inner-core boundary density jump. We find both conductivities to be 2-3 times higher than estimates in current use. The changes are so large that core thermal histories and power requirements must be reassessed. New estimates of adiabatic heat-flux give 15-16 TW at the CMB, higher than present estimates of CMB heat-flux based on mantle convection; the top of the core must be thermally stratified and any convection in the upper core driven by chemical convection against the adverse thermal buoyancy or lateral variations in CMB heat flow. Power for the geodynamo is greatly restricted and future models of mantle evolution must incorporate a high CMB heat-flux and explain recent formation of the inner core.