Somatostatin in the rat periventricular nucleus: sex differences and effect of gonadal steroids 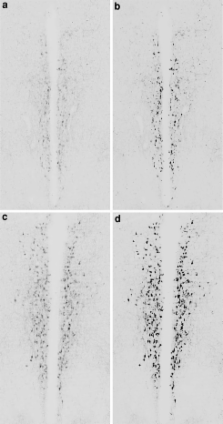 In the rat, the sexual dimorphism in growth hormone release is driven by sex steroids, and is suggested to result mainly from differences in somatostatin (SOM) release patterns from the median eminence. We studied the effect of gonadal steroids on SOM peptide-containing cells in the periventricular nucleus (PeVN) of ovariectomized (OVX) female rats, and compared these data with data from intact male rats. Adult female rats were treated with estradiol (E 2) and/or progesterone (P), 3 months (long-term) or 2 weeks (short-term) after ovariectomy (OVX). Perfusion-fixed brains were sliced and stained, and the number of SOM-immunoreactive (-ir) cells and total SOM-ir area (in μm 2) were determined using computer assisted analysis. SOM-ir cells in the PeVN showed a very characteristic rostro-caudal distribution and localization in relation to the third ventricle. Both the number of SOM-ir cells and total SOM-ir area in the PeVN were higher in male compared to OVX female rats. Neither the number of SOM-ir cells, nor the total SOM-ir area in the PeVN was affected by E 2 or P treatment alone. Treatment with both gonadal steroids, however, did increase total SOM-immunoreactivity. This study is the first to describe SOM cell distribution within the rat PeVN in great detail. A clear sex difference exists in SOM peptide content in the rat PeVN. In addition, E 2 and P may act synergistically to affect SOM cells in the female PeVN, suggesting that both gonadal steroids may be involved in the generation of the typical feminine SOM release pattern.

D Cocchi,  Peter Müller,  V Locatelli (1999)
The secretion of growth hormone (GH) is regulated through a complex neuroendocrine control system, especially by the functional interplay of two hypothalamic hypophysiotropic hormones, GH-releasing hormone (GHRH) and somatostatin (SS), exerting stimulatory and inhibitory influences, respectively, on the somatotrope. The two hypothalamic neurohormones are subject to modulation by a host of neurotransmitters, especially the noradrenergic and cholinergic ones and other hypothalamic neuropeptides, and are the final mediators of metabolic, endocrine, neural, and immune influences for the secretion of GH. Since the identification of the GHRH peptide, recombinant DNA procedures have been used to characterize the corresponding cDNA and to clone GHRH receptor isoforms in rodent and human pituitaries. Parallel to research into the effects of SS and its analogs on endocrine and exocrine secretions, investigations into their mechanism of action have led to the discovery of five separate SS receptor genes encoding a family of G protein-coupled SS receptors, which are widely expressed in the pituitary, brain, and the periphery, and to the synthesis of analogs with subtype specificity. Better understanding of the function of GHRH, SS, and their receptors and, hence, of neural regulation of GH secretion in health and disease has been achieved with the discovery of a new class of fairly specific, orally active, small peptides and their congeners, the GH-releasing peptides, acting on specific, ubiquitous seven-transmembrane domain receptors, whose natural ligands are not yet known.

Sexual dimorphism in the control of growth hormone secretion.

Henry S. Eden,  J Jansson,  O Isaksson (1984)
The secretory pattern of GH in the mature rat is sexually differentiated. In male rats GH is secreted in pulses occurring at regular 3- to 4-h intervals. In females the pulses are lower and plasma GH levels between the pulses are higher than in males. The continuous presence of testosterone appears to be necessary to maintain low basal GH levels in adult male rats. Neonatal, but not prepubertal, gonadectomy decreases GH pulse height in adult male rats to female levels. Administration of testosterone neonatally to castrated animals returns GH pulse height to normal suggesting that neonatal testicular androgen secretion is one determinant for GH pulse height in adult male rats. Administration of testosterone neonatally or during adult life to neonatally ovariectomized rats also produces higher GH pulses. In contrast to testosterone, estrogens elevate basal plasma GH levels and suppress the GH pulses under some conditions. Estrogens may stimulate basal GH secretion by acting directly on the pituitary. The physiological significance of the secretory pattern of GH has been investigated in hypophysectomized rats by simulating different plasma patterns of GH. The results suggest that high, infrequent GH pulses with low plasma GH levels in between (i.e. a masculine plasma GH pattern) promotes growth more effectively than an intermediate, rather constant level of plasma GH (i.e. a feminine plasma GH pattern). Since male sex steroids masculinize the secretory pattern of GH and have only minor growth-promoting effects in hypophysectomized animals it appears that the growth promoting effect of androgens is indirect and is due to an altered secretory pattern of GH. Presumably, neonatal androgen secretion stimulates body growth during adult life by irreversibly masculinizing the secretory pattern of GH. In contrast, estrogens appear to influence body growth by mechanisms that are mainly independent of the secretory pattern of GH. Evidence is accumulating that the secretory pattern of GH in the rat also affects various sexually differentiated hepatic characteristics such as steroid metabolism and prolactin receptor concentration. Thus, a feminization of the liver develops after continuous, but not intermittent, administration of GH to hypophysectomized rats. GH secretion is predominantly regulated by two hypothalamic peptides; GRF, and the GH-release-inhibiting factor, somatostatin.(ABSTRACT TRUNCATED AT 400 WORDS)

A note on the use of picric acid-paraformaldehyde-glutaraldehyde fixative for correlated light and electron microscopic immunocytochemistry.

P Somogyi,  H Takagi (1982)
The buffered picric acid paraformaldehyde fixative originally recommended for electronmicroscopy and which has since been used occasionally for light-microscopic immunocytochemistry, has been supplemented with glutaraldehyde and used as primary fixative for the perfusion of rat brains. In the basal ganglia and preoptic area, substance P, somatostatin and leu-enkephalin immunoreactive material was localized with the unlabelled antibody enzyme method in thick sections cut from freeze-thaw treated blocks. Good penetration of the antibodies without the use of detergents and the light background of the osmium-treated sections allowed the selection for electron-microscopy of immunoreactive structures as small as individual boutons that had been identified at the light-microscopic level. It is suggested that the procedure may be useful for electron-microscopic sampling of immunoreactive structures occurring infrequently over a large area or for the electron-microscopic study of light-microscopically classified neurons.