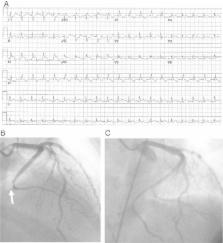 Melvin M. Scheinman,  Shi Huang (2000)
The results of the NASPE Prospective Voluntary Registry are reported. A total of 3,357 patients were entered. For those undergoing atrioventricular (AV) junctional ablation (646 patients), the success rate was 97.4% and significant complications occurred in 5 patients. A total of 1,197 patients underwent AV nodal modification for AV nodal reentrant tachycardia, which was successful in 96.1% and the only significant complication was development of AV block (1%). Accessory pathway ablation was performed in 654 patients and was successful in 94%. Major complications included cardiac tamponade (7 patients), acute myocardial infarction (1 patient), femoral artery pseudoaneurysm (1 patient), AV block (1 patient), pneumothorax (1 patient), and pericarditis (2 patients). A total of 447 patients underwent atrial flutter ablation and acute success was achieved in 86% of patients. Significant complications included inadvertent AV block (3 patients), significant tricuspid regurgitation (1 patient), cardiac tamponade (1 patient), and pneumothorax (1 patient). Atrial tachycardia was attempted for 216 patients and the success rate was higher for those with right atrial (80%) or left atrial (72%) compared to those with septal foci (52%). A total of 201 patients underwent ablation for ventricular tachycardia. The success rate was higher for those with idiopathic ventricular tachycardia compared to those with ventricular tachycardia due to ischemic heart disease or cardiomyopathy. While the number of AV junction ablation were higher for those > 60 years of age, there was no significant difference in the success rate or incidence of complication comparing patients > or = 60 to those 100 ablation/year) with lower volume centers or between teaching and non-teaching hospitals.

Coronary arteriography 1984-1987: a report of the Registry of the Society for Cardiac Angiography and Interventions. I. Results and complications.

G Vetrovec,  A Pichard,  Tanya Johnson … (1989)
This prospective series of results and complications of coronary arteriography from the Registry of the Society for Cardiac Angiography and Interventions is the largest ever reported. Since the initial report published in 1982, the results of coronary artery surgery and angioplasty have improved and therefore older and more symptomatic patients are referred for coronary arteriography. More patients are now studied by the femoral approach, and the major complications of the techniques are similar. Despite studying older and higher-risk patients, the complications are remarkably similar to those reported in the older series. Because of the sicker patients being studied, it is probably unlikely that the complication rate will decrease further in the future. The Society for Cardiac Angiography and Interventions will continue its Registry to follow complication rates of both established and new procedure.