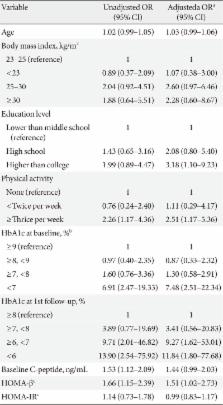 We retrospectively reviewed the medical records of 194 new-onset, drug-naïve patients with T2DM who were diagnosed between January 2011 and March 2013, and were followed up for >2 years. Glycemic durability was defined as the maintenance of optimal glycemic control (glycosylated hemoglobin [HbA1c] <7.0%) for 2 years without substitution or adding other glucose-lowering agents. Clinical factors and glycemic markers associated with glycemic durability were compared between two groups: a durability group and a non-durability group.

Patients in the durability group had a higher baseline body mass index (26.1 kg/m 2 vs. 24.9 kg/m 2) and lower HbA1c (8.6% vs. 9.7%) than the non-durability group. The initial choice of glucose-lowering agents was similar in both groups, except for insulin and sulfonylureas, which were more frequently prescribed in the non-durability group. In multiple logistic regression analyses, higher levels of education, physical activity, and homeostasis model assessment of β-cell function (HOMA-β) were associated with glycemic durability. Notably, lower HbA1c (<7.0%) at baseline and first follow-up were significantly associated with glycemic durability (adjusted odds ratio [OR], 7.48; 95% confidence interval [CI], 2.51 to 22.3) (adjusted OR, 9.27; 95% CI, 1.62 to 53.1, respectively), after adjusting for confounding variables including the types of glucose-lowering agents.

Early achievement of HbA1c level within the glycemic target was a determinant of long-term glycemic durability in new-onset T2DM, as were higher levels of education, physical activity, and HOMA-β.

Tracey Turner,  V Frighi,  Ashley Holman … (1999)
Treatment with diet alone, insulin, sulfonylurea, or metformin is known to improve glycemia in patients with type 2 diabetes mellitus, but which treatment most frequently attains target fasting plasma glucose (FPG) concentration of less than 7.8 mmol/L (140 mg/dL) or glycosylated hemoglobin A1c (HbA1c) below 7% is unknown. To assess how often each therapy can achieve the glycemic control target levels set by the American Diabetes Association. Randomized controlled trial conducted between 1977 and 1997. Patients were recruited between 1977 and 1991 and were followed up every 3 months for 3, 6, and 9 years after enrollment. Outpatient diabetes clinics in 15 UK hospitals. A total of 4075 patients newly diagnosed as having type 2 diabetes ranged in age between 25 and 65 years and had a median (interquartile range) FPG concentration of 11.5 (9.0-14.4) mmol/L [207 (162-259) mg/dL], HbA1c levels of 9.1% (7.5%-10.7%), and a mean (SD) body mass index of 29 (6) kg/m2. After 3 months on a low-fat, high-carbohydrate, high-fiber diet, patients were randomized to therapy with diet alone, insulin, sulfonylurea, or metformin. Fasting plasma glucose and HbA1c levels, and the proportion of patients who achieved target levels below 7% HbA1c or less than 7.8 mmol/L (140 mg/dL) FPG at 3, 6, or 9 years following diagnosis. The proportion of patients who maintained target glycemic levels declined markedly over 9 years of follow-up. After 9 years of monotherapy with diet, insulin, or sulfonylurea, 8%, 42%, and 24%, respectively, achieved FPG levels of less than 7.8 mmol/L (140 mg/dL) and 9%, 28%, and 24% achieved HbA1c levels below 7%. In obese patients randomized to metformin, 18% attained FPG levels of less than 7.8 mmol/L (140 mg/dL) and 13% attained HbA1c levels below 7%. Patients less likely to achieve target levels were younger, more obese, or more hyperglycemic than other patients. Each therapeutic agent, as monotherapy, increased 2- to 3-fold the proportion of patients who attained HbA1c below 7% compared with diet alone. However, the progressive deterioration of diabetes control was such that after 3 years approximately 50% of patients could attain this goal with monotherapy, and by 9 years this declined to approximately 25%. The majority of patients need multiple therapies to attain these glycemic target levels in the longer term.

Effects of exercise on glycemic control and body mass in type 2 diabetes mellitus: a meta-analysis of controlled clinical trials.

Normand Boulé,  John Kenny,  Lydia E. Haddad … (2001)
Exercise is widely perceived to be beneficial for glycemic control and weight loss in patients with type 2 diabetes. However, clinical trials on the effects of exercise in patients with type 2 diabetes have had small sample sizes and conflicting results. To systematically review and quantify the effect of exercise on glycosylated hemoglobin (HbA(1c)) and body mass in patients with type 2 diabetes. Database searches of MEDLINE, EMBASE, Sport Discuss, Health Star, Dissertation Abstracts, and the Cochrane Controlled Trials Register for the period up to and including December 2000. Additional data sources included bibliographies of textbooks and articles identified by the database searches. We selected studies that evaluated the effects of exercise interventions (duration >/=8 weeks) in adults with type 2 diabetes. Fourteen (11 randomized and 3 nonrandomized) controlled trials were included. Studies that included drug cointerventions were excluded. Two reviewers independently extracted baseline and postintervention means and SDs for the intervention and control groups. The characteristics of the exercise interventions and the methodological quality of the trials were also extracted. Twelve aerobic training studies (mean [SD], 3.4 [0.9] times/week for 18 [15] weeks) and 2 resistance training studies (mean [SD], 10 [0.7] exercises, 2.5 [0.7] sets, 13 [0.7] repetitions, 2.5 [0.4] times/week for 15 [10] weeks) were included in the analyses. The weighted mean postintervention HbA(1c) was lower in the exercise groups compared with the control groups (7.65% vs 8.31%; weighted mean difference, -0.66%; P<.001). The difference in postintervention body mass between exercise groups and control groups was not significant (83.02 kg vs 82.48 kg; weighted mean difference, 0.54; P =.76). Exercise training reduces HbA(1c) by an amount that should decrease the risk of diabetic complications, but no significantly greater change in body mass was found when exercise groups were compared with control groups.

Jianping Weng,  Yanbing Li,  Wen Xu … (2008)
Early intensive insulin therapy in patients with newly diagnosed type 2 diabetes might improve beta-cell function and result in extended glycaemic remissions. We did a multicentre, randomised trial to compare the effects of transient intensive insulin therapy (continuous subcutaneous insulin infusion [CSII] or multiple daily insulin injections [MDI]) with oral hypoglycaemic agents on beta-cell function and diabetes remission rate. 382 patients, aged 25-70 years, were enrolled from nine centres in China between September, 2004, and October, 2006. The patients, with fasting plasma glucose of 7.0-16.7 mmol/L, were randomly assigned to therapy with insulin (CSII or MDI) or oral hypoglycaemic agents for initial rapid correction of hyperglycaemia. Treatment was stopped after normoglycaemia was maintained for 2 weeks. Patients were then followed-up on diet and exercise alone. Intravenous glucose tolerance tests were done and blood glucose, insulin, and proinsulin were measured before and after therapy withdrawal and at 1-year follow-up. Primary endpoint was time of glycaemic remission and remission rate at 1 year after short-term intensive therapy. Analysis was per protocol. This study was registered with ClinicalTrials.gov, number NCT00147836. More patients achieved target glycaemic control in the insulin groups (97.1% [133 of 137] in CSII and 95.2% [118 of 124] in MDI) in less time (4.0 days [SD 2.5] in CSII and 5.6 days [SD 3.8] in MDI) than those treated with oral hypoglycaemic agents (83.5% [101 of 121] and 9.3 days [SD 5.3]). Remission rates after 1 year were significantly higher in the insulin groups (51.1% in CSII and 44.9% in MDI) than in the oral hypoglycaemic agents group (26.7%; p=0.0012). beta-cell function represented by HOMA B and acute insulin response improved significantly after intensive interventions. The increase in acute insulin response was sustained in the insulin groups but significantly declined in the oral hypoglycaemic agents group at 1 year in all patients in the remission group. Early intensive insulin therapy in patients with newly diagnosed type 2 diabetes has favourable outcomes on recovery and maintenance of beta-cell function and protracted glycaemic remission compared with treatment with oral hypoglycaemic agents.