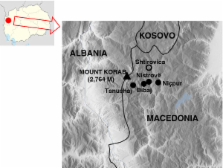 Ethnobotanical surveys of the Western Balkans are important for the cross-cultural study of local plant knowledge and also for obtaining baseline data, which is crucial for fostering future rural development and eco-tourism initiatives in the region. The current ethnobotanical field study was conducted among the last remaining Albanians inhabiting the upper Reka Valley at the base of Mount Korab in the Mavrovo National Park of the Republic of Macedonia.

Field research was conducted with all inhabitants of the last four inhabited villages of the upper Reka Valley (n=17). Semi-structured and open interviews were conducted regarding the perception and use of the local flora and cultivated plants.

The uses of ninety-two plant and fungal taxa were recorded; among the most uncommon uses, the contemporary use of young cooked potato ( Solanum tuberosum) leaves and Rumex patientia as a filling for savory pies was documented. Comparison of the data with an ethnographic study conducted one century ago in the same area shows a remarkable resilience of original local plant knowledge, with the only exception of rye, which has today disappeared from the local foodscape. Medicinal plant use reports show important similarities with the ethnobotanical data collected in other Albanian areas, which are largely influenced by South-Slavic cultures.

Ethnopharmacology of liakra: traditional weedy vegetables of the Arbëreshë of the Vulture area in southern Italy.

Andrea Pieroni,  Sabine Nebel,  Cassandra Quave … (2002)
An ethnobiological field study on food plants and medicinal foods traditionally consumed in three Arbëresh (ethnic Albanian) communities in northern Lucania (southern Italy) document approximately 120 botanical taxa used for these purposes. Non-domesticated food vegetables (liakra), mostly gathered during the spring season, play a central role as traditional functional food. Quantitative ethnobotanical, ethnotaxonomical, ethnoecological, ethnogastronomical, and ethnopharmacological aspects related to gathering, processing, cooking and consumption of liakra are discussed. Unusual food species, such as Lycium europeaum, Centaurea calcitrapa, and a few spontaneous weedy Asteraceae and Brassicaceae species are locally used in the kitchen. Most of these are very poorly known phytochemically and phytopharmacologically. Moreover, an analysis of taste perception of the most commonly used botanical foods was conducted in the village of Ginestra. Arbëresh taste classification and indigenous criteria related to the perception of bitter taste in considering non-cultivated plants as food or medicine are discussed as well.

An ethnobotanical study on the usage of wild medicinal herbs from Kopaonik Mountain (Central Serbia).

Miroslava Mitrović,  Lola Djurdjević,  Snežana Jarić … (2007)
An ethnobotanical survey was carried out on the territory of the highest mountain in Central Serbia, Kopaonik, which is characterized by great plant diversity. In total, 83 wild species from 41 families and 96 preparations for use in human therapy were recorded. Among those wild plants which are most commonly used for medicinal purposes, Hypericum perforatum L., Urtica dioica L., Achillea millefolium L., Matricaria chamomilla L., Sambucus nigra L., and Thymus serpyllum L. were particularly highly recommended by the majority of informants as being 'beneficial for all ailments'. The most frequently reported medicinal uses were for treating gastrointestinal ailments (50%), skin injuries and problems (25.6%), followed by respiratory, urinary-genital and cardiovascular problems (20.5%, 20.5%, 19.2%, respectively). Plants with unusual phytotherapeutic uses are Galium verum L. (sedative properties) and Eupatorium cannabinum L. (influenza-like illnesses), while plants with interesting but lesser-known properties include Daphne laureola L. (rheumatism and skin ailments) and Ficaria verna Huds. (tubers for treating haemorrhoids). In addition, 10 wild species used in veterinary medicine, as well as 25 herbs used for human nourishment were noted.

Ethnobotanical study on medicinal use of wild and cultivated plants in middle, south and west Bosnia and Herzegovina.

Broza Šarić-Kundalić,  Christoph Dobeš,  Valerie Klatte-Asselmeyer … (2010)
The results of an ethnobotanical study on the use of wild and cultivated plants in middle, west and south Bosnia and Herzegovina (Western Balkan Peninsula; Southeast Europe) carried out in the years 2006-2009 are presented. Despite the country's extraordinary high plant diversity with about 3600 known species of vascular plants, plant usage in traditional medicine remained largely unexplored in the past. The purpose of this study was the systematic collection of information about usage of wild and cultivated plants in human therapy from Bosnia and Herzegovina. Information was gathered by performing so called open ethnobotanical interviews by which data on the name, age and occupation of the interviewed person; the geographic locality and date of the interview; the name of the used plant; part of the plant used; the prescription background and preparation procedure as well as the indication was systematically collected. Plants mentioned to be used by the informants were collected, taxonomically determined and corresponding material was deposited in the herbarium of the Department of Pharmacognosy of the University of Vienna. In total, 34 places including villages and mountain areas were visited and 51 people, known as 'traditional healers' by the rest of the inhabitants, questioned. 228 wild and cultivated species and 730 different preparations for the use in human therapy were recorded. Species of the genera Achillea, Hypericum, Mentha, Teucrium, Thymus, and Urtica were particularly highly recommended by the majority of the informants. The most frequently mentioned indications were urogenital tract disorders, respiratory system disorders, gastrointestinal tract disorders, skin ailments, blood system disorders, nervous system disorders, cardiovascular system disorders, and rheumatism. Infusions were the most frequently prepared formulation. Other applied preparations mentioned with decreasing frequency were decocts, ointments, direct application of plants without prior preparation, fluid unctions, sirups and tinctures or collars, freshly pressed juices, powders, and finally macerations. Balms known as "mehlems" were special to Bosnia and were prepared from freshly chopped or freshly pressed herbal parts of various plants. Warmed resins from Abies or Picea species, bees wax, raw cow or pig lard, olive oil and honey were used as additives in the mehlem formulations. Representatives of the genera Arctium, Carlina, Euphrasia, Hypericum, Plantago, Teucrium, and Urtica were most frequently used in these balms. Prescriptions were verbally delivered, usually from mother to daughter and for even more than six generations. For the purpose of further analyses and comparisons, the collected data were inserted in the so called "VOLKSMED" data base of Austrian prescriptions. The identified broad variety of indications and their frequent applications suggests that traditional plant use is of high importance and still crucial for the medicinal accommodation of Bosnian people. Fifty-seven of the species reported by Bosnian people were used in official pharmacy. In addition, a variety of less known plants has been used since ages in traditional therapy of this country and hence may be potential sources for new therapies. Therefore, further pharmaceutical research into this particular and scientifically still underexplored proportion of Bosnian plant biodiversity appears promising and is recommended by the authors. (c) 2010 Elsevier Ireland Ltd. All rights reserved.