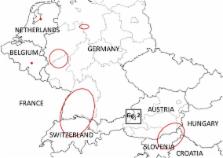 The German mosquito surveillance instrument ‘Mueckenatlas’ requests the general public to collect and submit mosquito specimens. Among these, increasing numbers of individuals of invasive species have been registered. Specimens of the Asian bush mosquito Aedes japonicus japonicus submitted from German Upper Bavaria, where this species had not previously been recorded, triggered regional monitoring in mid-2015.

The search for Ae. j. japonicus breeding sites and developmental stages concentrated on cemeteries in the municipality of origin of the submitted specimens and, subsequently, in the whole region. A virtual grid consisting of 10 × 10 km 2 cells in which up to three cemeteries were checked, was laid over the region. A cell was considered positive as soon as Ae. j. japonicus larvae were detected, and regarded negative when no larvae could be found in any of the cemeteries inspected. All cells surrounding a positive cell were screened accordingly. A subset of collected Aedes j. japonicus specimens was subjected to microsatellite and nad4 sequence analyses, and obtained data were compared to individuals from previously discovered European populations.

Based on the grid cells, an area of approximately 900 km 2 was populated by Ae. j. japonicus in Upper Bavaria and neighbouring Austria. Genetic analyses of microsatellites and nad4 gene sequences generated one genotype out of two previously described for Europe and three haplotypes, one of which had previously been found in Europe only in Ae. j. japonicus samples from a population in East Austria and Slovenia. The genetic analysis suggests the new population is closely related to the Austrian/Slovenian population.

As Ae. j. japonicus is well adapted to temperate climates, it has a strong tendency to expand and to colonise new territories in Central Europe, which is facilitated by human-mediated, passive transportation. The new population in Upper Bavaria/Austria is the seventh separate population described in Europe. According to our data, it originated from a previously detected population in eastern Austria/Slovenia and not from an introduction event from abroad. The dispersal and population dynamics of Ae. j. japonicus should be thoroughly surveyed, as this species is a potential vector of disease agents.

Richard Wilkerson,  Yvonne-Marie Linton,  Dina Fonseca … (2015)
The tribe Aedini (Family Culicidae) contains approximately one-quarter of the known species of mosquitoes, including vectors of deadly or debilitating disease agents. This tribe contains the genus Aedes, which is one of the three most familiar genera of mosquitoes. During the past decade, Aedini has been the focus of a series of extensive morphology-based phylogenetic studies published by Reinert, Harbach, and Kitching (RH&K). Those authors created 74 new, elevated or resurrected genera from what had been the single genus Aedes, almost tripling the number of genera in the entire family Culicidae. The proposed classification is based on subjective assessments of the “number and nature of the characters that support the branches” subtending particular monophyletic groups in the results of cladistic analyses of a large set of morphological characters of representative species. To gauge the stability of RH&K’s generic groupings we reanalyzed their data with unweighted parsimony jackknife and maximum-parsimony analyses, with and without ordering 14 of the characters as in RH&K. We found that their phylogeny was largely weakly supported and their taxonomic rankings failed priority and other useful taxon-naming criteria. Consequently, we propose simplified aedine generic designations that 1) restore a classification system that is useful for the operational community; 2) enhance the ability of taxonomists to accurately place new species into genera; 3) maintain the progress toward a natural classification based on monophyletic groups of species; and 4) correct the current classification system that is subject to instability as new species are described and existing species more thoroughly defined. We do not challenge the phylogenetic hypotheses generated by the above-mentioned series of morphological studies. However, we reduce the ranks of the genera and subgenera of RH&K to subgenera or informal species groups, respectively, to preserve stability as new data become available.

Helge Kampen,  Doreen Werner (2014)
The Asian bush or rock pool mosquito Aedes japonicus japonicus is one of the most expansive culicid species of the world. Being native to East Asia, this species was detected out of its original distribution range for the first time in the early 1990s in New Zealand where it could not establish, though. In 1998, established populations were reported from the eastern US, most likely as a result of introductions several years earlier. After a massive spread the mosquito is now widely distributed in eastern North America including Canada and two US states on the western coast. In the year 2000, it was demonstrated for the first time in Europe, continental France, but could be eliminated. A population that had appeared in Belgium in 2002 was not controlled until 2012 as it did not propagate. In 2008, immature developmental stages were discovered in a large area in northern Switzerland and bordering parts of Germany. Subsequent studies in Germany showed a wide distribution and several populations of the mosquito in various federal states. Also in 2011, the species was found in southeastern Austria (Styria) and neighbouring Slovenia. In 2013, a population was detected in the Central Netherlands, specimens were collected in southern Alsace, France, and the complete northeastern part of Slovenia was found colonized, with specimens also present across borders in adjacent Croatia. Apparently, at the end of 2013 a total of six populations occurred in Europe although it is not clear whether all of them are completely isolated. Similarly, it is not known whether these populations go back to the same number of introductions. While entry ports and long-distance continental migration routes are also obscure, it is likely that the international used tyre trade is the most important mode of intercontinental transportation of the mosquito. Aedes j. japonicus does not only display an aggressive biting behaviour but is suspected to be a vector of various disease agents and to displace indigenous culicid species. Therefore, Aedes j. japonicus might both cause public health problems in the future and have a significant impact on the biodiversity of the invaded territories.

Approaches to passive mosquito surveillance in the EU

Helge Kampen,  Jolyon Medlock,  Alexander GC Vaux … (2015)
The recent emergence in Europe of invasive mosquitoes and mosquito-borne disease associated with both invasive and native mosquito species has prompted intensified mosquito vector research in most European countries. Central to the efforts are mosquito monitoring and surveillance activities in order to assess the current species occurrence, distribution and, when possible, abundance, in order to permit the early detection of invasive species and the spread of competent vectors. As active mosquito collection, e.g. by trapping adults, dipping preimaginal developmental stages or ovitrapping, is usually cost-, time- and labour-intensive and can cover only small parts of a country, passive data collection approaches are gradually being integrated into monitoring programmes. Thus, scientists in several EU member states have recently initiated programmes for mosquito data collection and analysis that make use of sources other than targeted mosquito collection. While some of them extract mosquito distribution data from zoological databases established in other contexts, community-based approaches built upon the recognition, reporting, collection and submission of mosquito specimens by citizens are becoming more and more popular and increasingly support scientific research. Based on such reports and submissions, new populations, extended or new distribution areas and temporal activity patterns of invasive and native mosquito species were found. In all cases, extensive media work and communication with the participating individuals or groups was fundamental for success. The presented projects demonstrate that passive approaches are powerful tools to survey the mosquito fauna in order to supplement active mosquito surveillance strategies and render them more focused. Their ability to continuously produce biological data permits the early recognition of changes in the mosquito fauna that may have an impact on biting nuisance and the risk of pathogen transmission associated with mosquitoes. International coordination to explore synergies and increase efficiency of passive surveillance programmes across borders needs to be established.