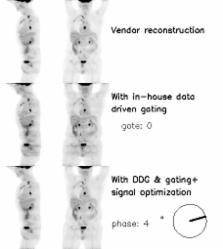 Positron emission tomography (PET) is increasingly used for the detection, characterization, and follow-up of tumors located in the thorax. However, patient respiratory motion presents a unique limitation that hinders the application of high-resolution PET technology for this type of imaging. Efforts to transcend this limitation have been underway for more than a decade, yet PET remains for practical considerations a modality vulnerable to motion-induced image degradation. Respiratory motion control is not employed in routine clinical operations. In this article, we take an opportunity to highlight some of the recent advancements in data-driven motion control strategies and how they may form an underpinning for what we are presenting as a fully automated data-driven motion control framework. This framework represents an alternative direction for future endeavors in motion control and can conceptually connect individual focused studies with a strategy for addressing big picture challenges and goals.

The impact of respiratory motion on tumor quantification and delineation in static PET/CT imaging.

Brandon Pierce,  M Alessio,  Yen-Chi Liu … (2009)
Our aim is to investigate the impact of respiratory motion on tumor quantification and delineation in static PET/CT imaging using a population of patient respiratory traces. A total of 1295 respiratory traces acquired during whole body PET/CT imaging were classified into three types according to the qualitative shape of their signal histograms. Each trace was scaled to three diaphragm motion amplitudes (6 mm, 11 mm and 16 mm) to drive a whole body PET/CT computer simulation that was validated with a physical phantom experiment. Three lung lesions and one liver lesion were simulated with diameters of 1 cm and 2 cm. PET data were reconstructed using the OS-EM algorithm with attenuation correction using CT images at the end-expiration phase and respiratory-averaged CT. The errors of the lesion maximum standardized uptake values (SUV(max)) and lesion volumes between motion-free and motion-blurred PET/CT images were measured and analyzed. For respiration with 11 mm diaphragm motion and larger quiescent period fraction, respiratory motion can cause a mean lesion SUV(max) underestimation of 28% and a mean lesion volume overestimation of 130% in PET/CT images with 1 cm lesions. The errors of lesion SUV(max) and volume are larger for patient traces with larger motion amplitudes. Smaller lesions are more sensitive to respiratory motion than larger lesions for the same motion amplitude. Patient respiratory traces with relatively larger quiescent period fraction yield results less subject to respiratory motion than traces with long-term amplitude variability. Mismatched attenuation correction due to respiratory motion can cause SUV(max) overestimation for lesions in the lower lung region close to the liver dome. Using respiratory-averaged CT for attenuation correction yields smaller mismatch errors than those using end-expiration CT. Respiratory motion can have a significant impact on static oncological PET/CT imaging where SUV and/or volume measurements are important. The impact is highly dependent upon motion amplitude, lesion location and size, attenuation map and respiratory pattern. To overcome the motion effect, motion compensation techniques may be necessary in clinical practice to improve the tumor quantification for determining the response to therapy or for radiation treatment planning.

Georges E. Fakhri,  Jordan Chun,  N Alpert … (2012)
Respiratory and cardiac motion is the most serious limitation to whole-body PET, resulting in spatial resolution close to 1 cm. Furthermore, motion-induced inconsistencies in the attenuation measurements often lead to significant artifacts in the reconstructed images. Gating can remove motion artifacts at the cost of increased noise. This paper presents an approach to respiratory motion correction using simultaneous PET/MRI to demonstrate initial results in phantoms, rabbits, and nonhuman primates and discusses the prospects for clinical application. Studies with a deformable phantom, a free-breathing primate, and rabbits implanted with radioactive beads were performed with simultaneous PET/MRI. Motion fields were estimated from concurrently acquired tagged MR images using 2 B-spline nonrigid image registration methods and incorporated into a PET list-mode ordered-subsets expectation maximization algorithm. Using the measured motion fields to transform both the emission data and the attenuation data, we could use all the coincidence data to reconstruct any phase of the respiratory cycle. We compared the resulting SNR and the channelized Hotelling observer (CHO) detection signal-to-noise ratio (SNR) in the motion-corrected reconstruction with the results obtained from standard gating and uncorrected studies. Motion correction virtually eliminated motion blur without reducing SNR, yielding images with SNR comparable to those obtained by gating with 5-8 times longer acquisitions in all studies. The CHO study in dynamic phantoms demonstrated a significant improvement (166%-276%) in lesion detection SNR with MRI-based motion correction as compared with gating (P < 0.001). This improvement was 43%-92% for large motion compared with lesion detection without motion correction (P < 0.001). CHO SNR in the rabbit studies confirmed these results. Tagged MRI motion correction in simultaneous PET/MRI significantly improves lesion detection compared with respiratory gating and no motion correction while reducing radiation dose. In vivo primate and rabbit studies confirmed the improvement in PET image quality and provide the rationale for evaluation in simultaneous whole-body PET/MRI clinical studies.

Otmar Schober,  Klaus P Schäfers,  Lars Stegger … (2009)
Gating methods acquiring biosignals (such as electrocardiography [ECG] and respiration) during PET enable one to reduce motion effects that potentially lead to image blurring and artifacts. This study evaluated different cardiac and respiratory gating methods: one based on ECG signals for cardiac gating and video signals for respiratory gating; 2 others based on measured inherent list mode events. Twenty-nine patients with coronary artery disease underwent a 20-min ECG-gated single-bed list mode PET scan of the heart. Of these, 17 were monitored by a video camera registering a marker on the patient's abdomen, thus capturing the respiratory motion for PET gating (video method). Additionally, respiratory and cardiac gating information was deduced without auxiliary measurements by dividing the list mode stream in 50-ms frames and then either determining the number of coincidences (sensitivity method) or computing the axial center of mass and SD of the measured counting rates in the same frames (center-of-mass method). The gated datasets (respiratory and cardiac gating) were reconstructed without attenuation correction. Measured wall thicknesses, maximum displacement of the left ventricular wall, and ejection fraction served as measures of the exactness of gating. All methods successfully captured respiratory motion and significantly decreased motion-induced blurring in the gated images. The center-of-mass method resulted in significantly larger left ventricular wall displacements than did the sensitivity method (P < 0.02); other differences were nonsignificant. List mode-based cardiac gating was found to work well for patients with high (18)F-FDG uptake when the center-of-mass method was used, leading to an ejection fraction correlation coefficient of r = 0.95 as compared with ECG-based gating. However, the sensitivity method did not always result in valid cardiac gating information, even in patients with high (18)F-FDG uptake. Our study demonstrated that valid gating signals during PET scans cannot be obtained only by tracking the external motion or applying an ECG but also by simply analyzing the PET list mode stream on a frame-by-frame basis.

This article is published under license to BioMed Central Ltd. This is an Open Access article distributed under the terms of the Creative Commons Attribution License (http://creativecommons.org/licenses/by/4.0), which permits unrestricted use, distribution, and reproduction in any medium, provided the original work is properly credited.