Ceriantharia (Cnidaria) of the World: an annotated catalogue and key to species 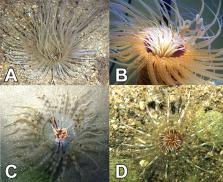 The diversity of Ceriantharia is known from studies formally describing species from the late 18 th Century onwards. However, no nomenclators including a list and discussion of all valid species have been produced since a list discussed by Carlgren in 1912. The present nomenclator presents a complete list of adult species of Ceriantharia of the World, including a discussion on each species. It includes the three families ( Arachnactidae , Botrucnidiferidae , Cerianthidae ) and the currently accepted 54 species based on their adult form. This study serves as a presentation of the “state-of-the-art” list of species of Ceriantharia , and includes a species identification key to support taxonomic identification. Additional in-depth species-by-species investigations for almost all cerianthid species is still needed, as the information available for most of these species is quite superficial.

Ehsan Kayal,  Béatrice Roure,  Hervé Philippe … (2013)
Background Cnidaria (corals, sea anemones, hydroids, jellyfish) is a phylum of relatively simple aquatic animals characterized by the presence of the cnidocyst: a cell containing a giant capsular organelle with an eversible tubule (cnida). Species within Cnidaria have life cycles that involve one or both of the two distinct body forms, a typically benthic polyp, which may or may not be colonial, and a typically pelagic mostly solitary medusa. The currently accepted taxonomic scheme subdivides Cnidaria into two main assemblages: Anthozoa (Hexacorallia + Octocorallia) – cnidarians with a reproductive polyp and the absence of a medusa stage – and Medusozoa (Cubozoa, Hydrozoa, Scyphozoa, Staurozoa) – cnidarians that usually possess a reproductive medusa stage. Hypothesized relationships among these taxa greatly impact interpretations of cnidarian character evolution. Results We expanded the sampling of cnidarian mitochondrial genomes, particularly from Medusozoa, to reevaluate phylogenetic relationships within Cnidaria. Our phylogenetic analyses based on a mitochogenomic dataset support many prior hypotheses, including monophyly of Hexacorallia, Octocorallia, Medusozoa, Cubozoa, Staurozoa, Hydrozoa, Carybdeida, Chirodropida, and Hydroidolina, but reject the monophyly of Anthozoa, indicating that the Octocorallia + Medusozoa relationship is not the result of sampling bias, as proposed earlier. Further, our analyses contradict Scyphozoa [Discomedusae + Coronatae], Acraspeda [Cubozoa + Scyphozoa], as well as the hypothesis that Staurozoa is the sister group to all the other medusozoans. Conclusions Cnidarian mitochondrial genomic data contain phylogenetic signal informative for understanding the evolutionary history of this phylum. Mitogenome-based phylogenies, which reject the monophyly of Anthozoa, provide further evidence for the polyp-first hypothesis. By rejecting the traditional Acraspeda and Scyphozoa hypotheses, these analyses suggest that the shared morphological characters in these groups are plesiomorphies, originated in the branch leading to Medusozoa. The expansion of mitogenomic data along with improvements in phylogenetic inference methods and use of additional nuclear markers will further enhance our understanding of the phylogenetic relationships and character evolution within Cnidaria.

Fast-Evolving Mitochondrial DNA in Ceriantharia: A Reflection of Hexacorallia Paraphyly?

Sérgio Stampar,  Maximiliano Maronna,  Marcelo Kitahara … (2014)
The low evolutionary rate of mitochondrial genes in Anthozoa has challenged their utility for phylogenetic and systematic purposes, especially for DNA barcoding. However, the evolutionary rate of Ceriantharia, one of the most enigmatic “orders” within Anthozoa, has never been specifically examined. In this study, the divergence of mitochondrial DNA of Ceriantharia was compared to members of other Anthozoa and Medusozoa groups. In addition, nuclear markers were used to check the relative phylogenetic position of Ceriantharia in relation to other Cnidaria members. The results demonstrated a pattern of divergence of mitochondrial DNA completely different from those estimated for other anthozoans, and phylogenetic analyses indicate that Ceriantharia is not included within hexacorallians in most performed analyses. Thus, we propose that the Ceriantharia should be addressed as a separate clade.