The Gut-Lung Axis in Health and Respiratory Diseases: A Place for Inter-Organ and Inter-Kingdom Crosstalks 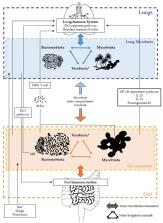 The gut and lungs are anatomically distinct, but potential anatomic communications and complex pathways involving their respective microbiota have reinforced the existence of a gut–lung axis (GLA). Compared to the better-studied gut microbiota, the lung microbiota, only considered in recent years, represents a more discreet part of the whole microbiota associated to human hosts. While the vast majority of studies focused on the bacterial component of the microbiota in healthy and pathological conditions, recent works have highlighted the contribution of fungal and viral kingdoms at both digestive and respiratory levels. Moreover, growing evidence indicates the key role of inter-kingdom crosstalks in maintaining host homeostasis and in disease evolution. In fact, the recently emerged GLA concept involves host–microbe as well as microbe–microbe interactions, based both on localized and long-reaching effects. GLA can shape immune responses and interfere with the course of respiratory diseases. In this review, we aim to analyze how the lung and gut microbiota influence each other and may impact on respiratory diseases. Due to the limited knowledge on the human virobiota, we focused on gut and lung bacteriobiota and mycobiota, with a specific attention on inter-kingdom microbial crosstalks which are able to shape local or long-reached host responses within the GLA.

Structure, Function and Diversity of the Healthy Human Microbiome

Tatiana Vishnivetskaya, Jeroen Raes (2014)
Studies of the human microbiome have revealed that even healthy individuals differ remarkably in the microbes that occupy habitats such as the gut, skin, and vagina. Much of this diversity remains unexplained, although diet, environment, host genetics, and early microbial exposure have all been implicated. Accordingly, to characterize the ecology of human-associated microbial communities, the Human Microbiome Project has analyzed the largest cohort and set of distinct, clinically relevant body habitats to date. We found the diversity and abundance of each habitat’s signature microbes to vary widely even among healthy subjects, with strong niche specialization both within and among individuals. The project encountered an estimated 81–99% of the genera, enzyme families, and community configurations occupied by the healthy Western microbiome. Metagenomic carriage of metabolic pathways was stable among individuals despite variation in community structure, and ethnic/racial background proved to be one of the strongest associations of both pathways and microbes with clinical metadata. These results thus delineate the range of structural and functional configurations normal in the microbial communities of a healthy population, enabling future characterization of the epidemiology, ecology, and translational applications of the human microbiome.

An immunomodulatory molecule of symbiotic bacteria directs maturation of the host immune system.

Sarkis Mazmanian, Cui Hua Liu, Arthur O Tzianabos … (2005)
The mammalian gastrointestinal tract harbors a complex ecosystem consisting of countless bacteria in homeostasis with the host immune system. Shaped by evolution, this partnership has potential for symbiotic benefit. However, the identities of bacterial molecules mediating symbiosis remain undefined. Here we show that, during colonization of animals with the ubiquitous gut microorganism Bacteroides fragilis, a bacterial polysaccharide (PSA) directs the cellular and physical maturation of the developing immune system. Comparison with germ-free animals reveals that the immunomodulatory activities of PSA during B. fragilis colonization include correcting systemic T cell deficiencies and T(H)1/T(H)2 imbalances and directing lymphoid organogenesis. A PSA mutant of B. fragilis does not restore these immunologic functions. PSA presented by intestinal dendritic cells activates CD4+ T cells and elicits appropriate cytokine production. These findings provide a molecular basis for host-bacterial symbiosis and reveal the archetypal molecule of commensal bacteria that mediates development of the host immune system.

Takeshi Ichinohe, Iris K Pang, Yosuke Kumamoto … (2011)
Although commensal bacteria are crucial in maintaining immune homeostasis of the intestine, the role of commensal bacteria in immune responses at other mucosal surfaces remains less clear. Here, we show that commensal microbiota composition critically regulates the generation of virus-specific CD4 and CD8 T cells and antibody responses following respiratory influenza virus infection. By using various antibiotic treatments, we found that neomycin-sensitive bacteria are associated with the induction of productive immune responses in the lung. Local or distal injection of Toll-like receptor (TLR) ligands could rescue the immune impairment in the antibiotic-treated mice. Intact microbiota provided signals leading to the expression of mRNA for pro-IL-1β and pro-IL-18 at steady state. Following influenza virus infection, inflammasome activation led to migration of dendritic cells (DCs) from the lung to the draining lymph node and T-cell priming. Our results reveal the importance of commensal microbiota in regulating immunity in the respiratory mucosa through the proper activation of inflammasomes.

Edited by: Yongqun Oliver He, University of Michigan, United States

This article was submitted to Microbiome in Health and Disease, a section of the journal Frontiers in Cellular and Infection Microbiology