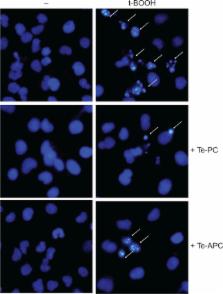 Tellurium-containing phycocyanin (Te-PC) and allophycocyanin (Te-APC), two organic tellurium (Te) species, were purified from tellurium-enriched Spirulina platensis by a fast protein liquid chromatographic method. It was found that the incorporation of Te into the peptides enhanced the antioxidant activities of both phycobiliproteins. With fractionation by ammonium sulfate precipitation and hydroxylapatite chromatography, Te-PC and Te-APC could be effectively separated with high purity, and Te concentrations were 611.1 and 625.3 μg g −1 protein in Te-PC and Te-APC, respectively. The subunits in the proteins were identified by using MALDI-TOF-TOF mass spectrometry. Te incorporation enhanced the antioxidant activities of both phycobiliproteins, as examined by 2,2′-azino-bis(3-ethylbenzothiazoline-6-sulphonic acid assay. Moreover, Te-PC and Te-APC showed dose-dependent protection on erythrocytes against the water-soluble free radical initiator 2,2′-azo(2-asmidinopropane)dihydrochloride-induced hemolysis. In the hepatoprotective model, apoptotic cell death and nuclear condensation induced by tert-butyl hydroperoxide in HepG2 cells was significantly attenuated by Te-PC and Te-APC. Taken together, these results suggest that Te-PC and Te-APC are promising Te-containing proteins with application potential for treatment of diseases related to oxidative stress.

R Deng,  Cheryl-Emiliane T. Chow (2010)
Spirulina is free-floating filamentous microalgae growing in alkaline water bodies. With its high nutritional value, Spirulina has been consumed as food for centuries in Central Africa. It is now widely used as nutraceutical food supplement worldwide. Recently, great attention and extensive studies have been devoted to evaluate its therapeutic benefits on an array of diseased conditions including hypercholesterolemia, hyperglycerolemia, cardiovascular diseases, inflammatory diseases, cancer, and viral infections. The cardiovascular benefits of Spirulina are primarily resulted from its hypolipidemic, antioxidant, and antiinflammatory activities. Data from preclinical studies with various animal models consistently demonstrate the hypolipidemic activity of Spirulina. Although differences in study design, sample size, and patient conditions resulting in minor inconsistency in response to Spirulina supplementation, the findings from human clinical trials are largely consistent with the hypolipidemic effects of Spirulina observed in the preclinical studies. However, most of the human clinical trials are suffered with limited sample size and some with poor experimental design. The antioxidant and/or antiinflammatory activities of Spirulina were demonstrated in a large number of preclinical studies. However, a limited number of clinical trials have been carried out so far to confirm such activities in human. Currently, our understanding on the underlying mechanisms for Spirulina's activities, especially the hypolipidemic effect, is limited. Spirulina is generally considered safe for human consumption supported by its long history of use as food source and its favorable safety profile in animal studies. However, rare cases of side-effects in human have been reported. Quality control in the growth and process of Spirulina to avoid contamination is mandatory to guarantee the safety of Spirulina products.

Derie Esteban Fuentes,  Claudio Vásquez,  Thomas G Chasteen … (2009)
The perceived importance of tellurium (Te) in biological systems has lagged behind selenium (Se), its lighter sister in the Group 16 chalcogens, because of tellurium's lower crustal abundance, lower oxyanion solubility and biospheric mobility and the fact that, unlike Se, Te has yet to be found to be an essential trace element. Te applications in electronics, optics, batteries and mining industries have expanded during the last few years, leading to an increase in environmental Te contamination, thus renewing biological interest in Te toxicity. This chalcogen is rarely found in the nontoxic, elemental state (Te(0)), but its soluble oxyanions, tellurite (TeO(3)(2-)) and tellurate (TeO(4)(2-)), are toxic for most forms of life even at very low concentrations. Although a number of Te resistance determinants (Tel) have been identified in plasmids or in the bacterial chromosome of different species of bacteria, the genetic and/or biochemical basis underlying bacterial TeO(3)(2-) toxicity is still poorly understood. This review traces the history of Te in its biological interactions, its enigmatic toxicity, importance in cellular oxidative stress, and interaction in cysteine metabolism.

Marty Kwok-Shing Wong,  Tianfeng Chen (2009)
The role of selenium as potential cancer chemopreventive and chemotherapeutic agents has been supported by epidemiological, preclinical and clinical studies. Although cell apoptosis has been evidenced as a critical mechanism mediating the anticancer activity of selenium, the underlying molecular mechanisms remain elusive. In the present study, we showed that selenocystine (SeC), a naturally occurring selenoamino acid, induced caspase-independent apoptosis in MCF-7 breast carcinoma cells, which was accompanied by poly(ADP-ribose) polymerase (PARP) cleavage, caspase activation, DNA fragmentation, phosphatidylserine exposure and nuclear condensation. Moreover, SeC induced the loss of mitochondrial membrane potential (DeltaPsi(m)) by regulating the expression and phosphorylation of Bcl-2 family members. Loss of DeltaPsi(m) led to the mitochondrial release of cytochrome c and apoptosis-inducing factor (AIF) which subsequently translocated into the nucleus and induced chromatin condensation and DNA fragmentation. MCF-7 cells exposed to SeC shown increase in total p53 and phosphorylated p53 on serine residues of Ser15, Ser20, and Ser392 prior to mitochondrial dysfunction. Silencing and attenuating of p53 activation with RNA interference and pifithrin-alpha treatment, respectively, partially suppressed SeC-induced cell apoptosis. Furthermore, generation of reactive oxygen species and subsequent induction of DNA strand breaks were found to be upstream cellular events induced by SeC. The thiol-reducing antioxidants, N-acetylcysteine and glutathione, completely blocked the occurrence of cell apoptosis. Taken together, these results suggest that SeC, as a promising anticancer selenocompound, induces MCF-7 cell apoptosis by activating ROS-mediated mitochondrial pathway and p53 phosphorylation.