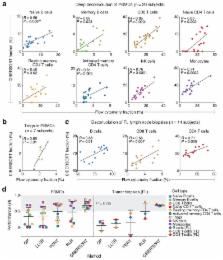 We introduce CIBERSORT, a method for characterizing cell composition of complex tissues from their gene expression profiles. When applied to enumeration of hematopoietic subsets in RNA mixtures from fresh, frozen, and fixed tissues, including solid tumors, CIBERSORT outperformed other methods with respect to noise, unknown mixture content, and closely related cell types. CIBERSORT should enable large-scale analysis of RNA mixtures for cellular biomarkers and therapeutic targets ( http://cibersort.stanford.edu).

Li-Jen Su,  Ching-Wei Chang,  Yu-Chung Wu … (2007)
Background The development of microarrays permits us to monitor transcriptomes on a genome-wide scale. To validate microarray measurements, quantitative-real time-reverse transcription PCR (Q-RT-PCR) is one of the most robust and commonly used approaches. The new challenge in gene quantification analysis is how to explicitly incorporate statistical estimation in such studies. In the realm of statistical analysis, the various available methods of the probe level normalization for microarray analysis may result in distinctly different target selections and variation in the scores for the correlation between microarray and Q-RT-PCR. Moreover, it remains a major challenge to identify a proper internal control for Q-RT-PCR when confirming microarray measurements. Results Sixty-six Affymetrix microarray slides using lung adenocarcinoma tissue RNAs were analyzed by a statistical re-sampling method in order to detect genes with minimal variation in gene expression. By this approach, we identified DDX5 as a novel internal control for Q-RT-PCR. Twenty-three genes, which were differentially expressed between adjacent normal and tumor samples, were selected and analyzed using 24 paired lung adenocarcinoma samples by Q-RT-PCR using two internal controls, DDX5 and GAPDH. The percentage correlation between Q-RT-PCR and microarray were 70% and 48% by using DDX5 and GAPDH as internal controls, respectively. Conclusion Together, these quantification strategies for Q-RT-PCR data processing procedure, which focused on minimal variation, ought to significantly facilitate internal control evaluation and selection for Q-RT-PCR when corroborating microarray data.

Correspondence and requests for materials should be addressed to: A.A.A. ( arasha@ 123456stanford.edu )
[9]