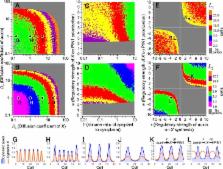 Phyllotaxis, the arrangement of leaves on a plant stem, is well known because of its beautiful geometric configuration, which is derived from the constant spacing between leaf primordia. This phyllotaxis is established by mutual interaction between a diffusible plant hormone auxin and its efflux carrier PIN1, which cooperatively generate a regular pattern of auxin maxima, small regions with high auxin concentrations, leading to leaf primordia. However, the molecular mechanism of the regular pattern of auxin maxima is still largely unknown. To better understand how the phyllotaxis pattern is controlled, we investigated mathematical models based on the auxin–PIN1 interaction through linear stability analysis and numerical simulations, focusing on the spatial regularity control of auxin maxima. As in previous reports, we first confirmed that this spatial regularity can be reproduced by a highly simplified and abstract model. However, this model lacks the extracellular region and is not appropriate for considering the molecular mechanism. Thus, we investigated how auxin maxima patterns are affected under more realistic conditions. We found that the spatial regularity is eliminated by introducing the extracellular region, even in the presence of direct diffusion between cells or between extracellular spaces, and this strongly suggests the existence of an unknown molecular mechanism. To unravel this mechanism, we assumed a diffusible molecule to verify various feedback interactions with auxin–PIN1 dynamics. We revealed that regular patterns can be restored by a diffusible molecule that mediates the signaling from auxin to PIN1 polarization. Furthermore, as in the one-dimensional case, similar results are observed in the two-dimensional space. These results provide a great insight into the theoretical and molecular basis for understanding the phyllotaxis pattern. Our theoretical analysis strongly predicts a diffusible molecule that is pivotal for the phyllotaxis pattern but is yet to be determined experimentally.

Self-organization of spatially regular patterns is critical for development and differentiation in multicellular organisms. Phyllotaxis, the arrangement of leaves on a plant stem, shows diverse patterns depending on plant species, which attracts many people because of its beautiful geometric configuration. In particular, it is well known that the spiral phyllotaxis is closely related to mathematical concepts such as the golden ratio and Fibonacci sequence. The phyllotaxis pattern is established by the mutual interaction between a diffusible plant hormone auxin and its efflux carrier PIN1, but its molecular mechanism is still largely unknown. To understand how phyllotaxis the pattern is controlled, we have theoretically and numerically investigated mathematical models based on the auxin–PIN1 interaction. Our theoretical analysis predicts a diffusible molecule that is critical for the phyllotaxis pattern but is yet to be determined experimentally. Furthermore, we predict the molecular mechanism of this molecule, which must mediate the feedback signaling from auxin to PIN1 polarization. Our study provides a detailed insight into the theoretical and molecular basis for understanding the phyllotaxis pattern, leading to the creation of plant varieties with various phyllotaxis patterns in the future.

MAX4 and RMS1 are orthologous dioxygenase-like genes that regulate shoot branching in Arabidopsis and pea.

S. Chatfield,  Eloise Foo,  Catherine Rameau … (2003)
Shoot branching is inhibited by auxin transported down the stem from the shoot apex. Auxin does not accumulate in inhibited buds and so must act indirectly. We show that mutations in the MAX4 gene of Arabidopsis result in increased and auxin-resistant bud growth. Increased branching in max4 shoots is restored to wild type by grafting to wild-type rootstocks, suggesting that MAX4 is required to produce a mobile branch-inhibiting signal, acting downstream of auxin. A similar role has been proposed for the pea gene, RMS1. Accordingly, MAX4 and RMS1 were found to encode orthologous, auxin-inducible members of the polyene dioxygenase family.

Interactions between auxin and strigolactone in shoot branching control.

Christine Beveridge,  Alice Hayward,  Petra Stirnberg … (2009)
In Arabidopsis (Arabidopsis thaliana), the carotenoid cleavage dioxygenases MORE AXILLARY GROWTH3 (MAX3) and MAX4 act together with MAX1 to produce a strigolactone signaling molecule required for the inhibition of axillary bud outgrowth. We show that both MAX3 and MAX4 transcripts are positively auxin regulated in a manner similar to the orthologous genes from pea (Pisum sativum) and rice (Oryza sativa), supporting evolutionary conservation of this regulation in plants. This regulation is important for branching control because large auxin-related reductions in these transcripts are associated with increased axillary branching. Both transcripts are up-regulated in max mutants, and consistent with max mutants having increased auxin in the polar auxin transport stream, this feedback regulation involves auxin signaling. We suggest that both auxin and strigolactone have the capacity to modulate each other's levels and distribution in a dynamic feedback loop required for the coordinated control of axillary branching.